Keep Calm and Carry On

Keep Calm and Carry On was a motivational poster produced by the British Ministry of Information in 1939 in preparation for World War II. The poster was intended to raise the morale of the British public, threatened with widely predicted mass air attacks on major cities. Although almost 2,500,000 copies of Keep Calm and Carry On were printed between August 23rd and September 3rd, 1939 but the poster was not sanctioned for immediate public display. It was instead decided that copies should remain in "cold storage" for use after serious air raids. So, although the Blitz clearly did take place, the poster was only rarely publicly displayed and even then, unauthorised. 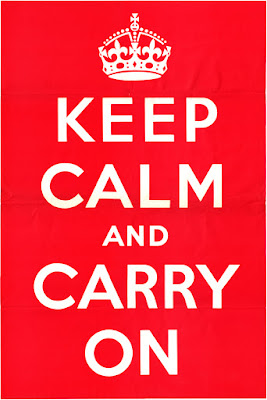 Following criticism of its cost and impact, the Ministry of Information publicity campaign was cancelled in October 1939. Many people claimed not to have seen the posters; while those who did see them regarded them as patronising and divisive.

Over the last decade, the popularity of Keep Calm and Carry On grew widely in various media resulting in innumerable parodies, imitations and co-optations, making it a notable meme. Messages range from the cute to the overtly political.

How ironic then that, faced with the COVID-19 pandemic, the sentiments of the poster have been so widely disregarded. Panic buying, stockpiling and, undoubtedly, profiteering seem to be the public reaction. Hardly the much mythologised “Blitz spirit”, but then again today’s leaders seemingly have not acted with any of the planning and preparation conducted by the British Government of the late 1930s. Eighty-one years ago, the lessons from the Great War of 1914-18 had been learnt. As war was once again declared, a host of wartime restrictions were enacted and rationing for all mandated.

Given the message seems to be that many people and, most significantly, the UK economy will be adversely affected, one might have expected a strong government to have acted quickly and decisively. Yet, in an eerie parallel, it seems the lesson from history has not been learnt. Like today, the British government of 1917, in line with its wartime "business as usual" policy, was reluctant to try to control the food markets. It resisted efforts to introduce minimum prices in cereal production, though relenting on the control of essential imports such as sugar, meat and grains. When changes were introduced, however, they had limited effect. A year earlier, it had become illegal to consume more than two courses while lunching in a public eating place or more than three for dinner; fines were introduced for members of the public found feeding pigeons or stray animals.

In February 1917, in yet another foretaste of World War Two, Germany’s unrestricted submarine warfare programme began to sink ships bringing food to Britain. Aimed at starving the country into surrender, Britain responded by introducing voluntary rationing. Bread was subsidised from September 1917, with compulsory rationing introduced in stages between December 1917 and February 1918, as Britain's stores of wheat dropped to just six weeks’ supply. 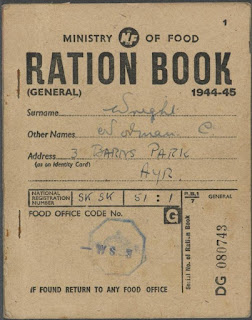 Rationing was an idea that was not a popular with the British public, however. But as the war went on food became scarcer and scarcer, and in 1918 the Government finally introduced rationing. Ration books were introduced on July 15th, 1918 for butter, margarine, lard, meat, and sugar.

At the start of the Second World War in 1939, the civilian population of the country was about 50 million. To feed the people, the United Kingdom imported 20,000,000 tons of food per year, including: about 70% of its cheese and sugar, nearly 80% of fruits, about 70% of cereals and fats, 50% of its meat, and Britain also relied on imported feed to support its domestic meat production.

As before, it was one of the principal strategies of Nazi Germany in the Battle of the Atlantic to attack shipping bound for Britain, restricting British industry and potentially starving the nation into submission. So, to deal with sometimes extreme shortages, the Ministry of Food instituted a system of rationing. To buy most rationed items, each person had to register at chosen shops and was provided with a ration book containing coupons. The shopkeeper was provided with enough food for registered customers. Purchasers had to take ration books with them when shopping, so the relevant coupon or coupons could be cancelled.

Wartime rationing in Britain finally ended in 1954. For the most part the system had been a success. While not exactly an enjoyable experience, and one that was still subject to abuses, rationing did succeed in keeping the population fed. Affecting everyone, it offered a sense of “we’re all in it together”[1], an idea that, perhaps, has value in today's crisis.  Like the war, the COVID-19 pandemic will come to an end and, like the war, there will be casualties.  Yet there is still no reason for us to panic.  While clearly not wishing serious illness or death on anyone, the harsh reality is that the majority of people will be absolutely fine[2].  We would, however, benefit from a little of that Blitz Spirit (fiction or not) in the coming days: voluntary rationing, buying only what we actually need to reduce the strain on supermarket supply chains and their staff, and supporting each other.  Perhaps it does make sense that we Keep Calm and Carry On.


Notes:
1. The truth of that morale-boosting sentiment is debatable. The idea of the ‘Blitz Spirit’ is a fiction, a misconstrued concept where the people’s grim willingness to carry on because they had no other choice was interpreted, perhaps purposefully, into well-constructed propaganda. For an enlightening different view, Shannon Bent's piece on "The Blitz Spirit" is worth a read: https://www.historic-uk.com/HistoryUK/HistoryofBritain/Blitz-Spirit/
2.  Globally, up to 18 March 2020, WHO has been notified of 191,127 laboratory-confirmed cases of COVID-19 infection, including 7,807 related deaths.  In the UK there have been 103 deaths attributable to COVID-19 to date.  Compare that to Public Health England figures revealing an average of 8,000 deaths are caused by influenza each year in the UK.