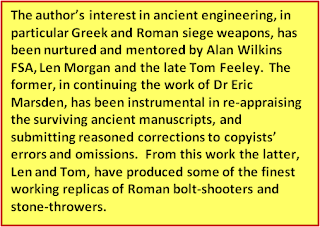 A major source of information for Roman artillery is Marcus Vitruvius Pollio, a 1st century BC Roman author, architect, civil and military engineer.  Commonly known as Vitruvius, Book X of his multi-volume work entitled De Architectura includes chapters on artillery.  In Book X.xvi.1, for example, Vitruvius refers to three separate terms for siege machines when beginning his description of the “Measures of Defence”.  Vitruvius (X.x.6) also claims to have described catapultorum rationes ("the rules of catapults") at the end of the section on the scorpio, which once again suggests a distinction.


For several years I accepted that catapults (bolt-shooters) were synonymous with “scorpions” following Vitruvius, and have even described them as such using the analogy of the bolt being the scorpion’s “sting in the tail”.  In the opening of Book X, Chapter x, for example, he writes of “catapults or scorpiones” and then in the first paragraph refers to “scorpiones and ballistae (X.x.1).  If Vitruvius’ use of terminology is inconsistent, then it is more confusing wherever he makes a distinction between three types of machine, i.e. ballistas, catapults and scorpions.

Yet Vitruvius is not alone.  The Roman encyclopaedist Pliny the Elder (HN 7.201) also lists the three machines separately[1], and Livy (26.47), in his catalogue of Carthaginian machines captured at New Carthage in 209 BC, writes of:

"120 catapults of the largest dimensions, 281 smaller ones; 23 larger ballistas, 52 smaller ones; larger and smaller scorpions and a huge number of weapons and projectiles"

Is it possible, therefore, that these authors considered the scorpion a distinctly different machine from a stone-throwing ballista or a bolt-shooting catapult.  If so, then what did this other scorpion look like?
For our purposes, ballistae, catapultae, and scorpiones are all torsion based artillery.  The principle of torsion was probably discovered by artificers working in Macedonia under Philip II and Polyidus between 353 BC and 341 BC.  Our understanding of their construction comes from Heron’s description (Belopoiika 81): “two separate wooden arms were inserted into two vertical skeins or springs of sinew-rope mounted in a stout frame of hardwood reinforced with iron plates.  Each strand of the rope is pre-stretched by winches around top and bottom iron washer-bars.  The iron washer-bars were slotted into revolving bronze cylinders that allowed the skein to be twisted, forcing the bow arms forward.  This twisting or torsion of the rope-springs was further increased when the arms were drawn back by winch, storing a massive amount of potential energy in the sinew.”[2]

When it comes to stone-throwers (Gr. lithobolos (Λιθοβόλος)) and bolt-shooters (Gr. Oxybeles Οξυβόλος)), the former are described as euthytonon (or euthytone), while the latter are palintonon (or palintone).  In Greek, a palintonon translates as "V-spring" and euthytonon (Ευθύτονος) translates as "straight-spring".  The "V" or straight spring describes how the construction of the spring frames and the shape of the bow arms of siege engines compare to shape of hand-held bows.

Confused?  In the early Imperial period, as under the Republic, two types of artillery were known: bolt-shooting euthytones (the scorpiones and catapultae of Vitruvius’ De Architectura X, x, 1-6) and stone-throwing palintones (the ballistae of Vitruvius’ De Architectura X, xi, 1-9).  According to Marsden these machines were apparently allocated 55-60 per legion[3].  Yet by the fourth century AD it seems the legions had lost their organic complement of artillery and the term ballista (and its compounds) appears in the literary sources to refer to an iron-framed bolt-shooter.  Presumably this was because the engine was technically a palintone, not a euthytone, and the old wooden-framed stone-throwing ballista is replaced by the more massive one-armed onager (Vegetius, Epitoma Rei Militaris ii, 10, 15 and 25; iii, 14 and 24; iv, 22).

Ammianus Marcellinus concurs.  By the mid-4th century AD, the Romans were employing the one-armed onager as their stone-projector, while the ballista seems to have been used only as a bolt-shooter, a task previously given to the euthytone, i.e. catapults.  Most importantly, Ammianus (23.4.7) claims that the onager had previously been known as a “scorpion”, quoniam aculeum desuper babet erectum ("because it has its sting raised up above it")[4].

Yet the 4th century AD is by no means the first appearance in the surviving literary sources for one-armed stone-throwing machines.  In c. 210 BC, some 500 years earlier, Philon of Byzantium casually refers to just such machine in his treatise on siegecraft, Poliorketika, in a passage concerned with defending a city under siege[5].  Had the one-armed stone-thrower been “hidden in plain sight” serving alongside the other named machines since Philon’s time?  Could the separate references to “scorpions” be the very same machines or their descendents for example the later Roman onager of Ammianus and Vegetius? 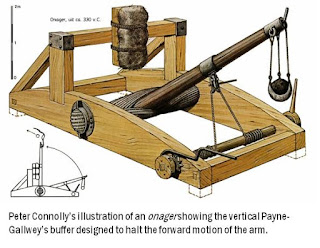 The design of the onager as a mechanized staff-sling is often thought to have been a late development, but as we have already seen Philon was aware of one-armed stone-throwers.  Unfortunately, he provides no specifics, and the weapon’s construction from mostly organic materials means that few physical remains are likely to survive.  Scroll forward just over three centuries later and a fleeting reference to a one-armed stone-thrower next appears in the work of the Emperor Trajan's engineer, Apollodorus of Damascus.  Indeed, the time of Trajan’s reign is significant because, as Marsden determined, during this period the terminology for artillery clearly changed.

Marsden was struck by the similarities between Heron’s cheiroballistra, an iron-framed palintone bolt-shooter, and the artillery pieces depicted on Trajan’s Column in Rome that date to around AD 110.  Although they were bolt-shooters, their wide palintone torsion frames qualified them for the term ballistae.  It seemed clear to Marsden that, from the reign of Trajan onward, palintones supplanted euthytones as the preferred machines for shooting bolts; ironically a capability they had always possessed.  The euthytone design seemingly disappeared from the mainstream and the one-armed machine usurped the name scorpio (scorpion), which had, up to this point, indicated a euthytone bolt-shooter.

If more evidence is needed then in his Scorpiace, written ca. AD 210, Tertullian describes how the creature, "rising up in an arching attack, draws its hooked sting up like a torsion machine; from this feature, they call the war machine a scorpion, that shoots its missiles by retracting."[6]  Tertullian equates the scorpion's tail to a one-armed torsion machine of the same name, in exactly the same way that Ammianus will do later.

Despite Tertullian from the reign of Emperor Trajan until the fourth century AD, when they are familiar to Ammianus and Vegetius, it seems that “the one-armed machines slip once more into obscurity.”[7]  Marsden notes that Ammianus refers to these one-arm machines as scorpio, catapulta, or onager, although Ammianus gives us the impression that the latter name was the “modern” and popular one.

So, what can we conclude?  The name applied to a given piece of torsion artillery heavily depends which author you reference, their familiarity with the subject matter, and the point in time they are describing.  It is just possible that all three types of weapon were in use concurrently and that perhaps the terms catapult, ballista and scorpion did refer to bolt-shooters, stone-throwers and one-armed machines respectively.  Personally, the author is inclined to use the terms catapultae for bolt-shooting euthytones, ballistae for stone-throwing palintones and, like Tertullian, reserve the term scorpiones for the one-armed machines known to later Romans as “onagers”.  But then, what's in a name?