Anglo-Saxon Fare Fit for a Battle

A pivotal battle took place 953 years ago on October 14th, 1066.  It changed the course of Anglo-Saxon England's history when William of Normandy defeated the army of King Harold II at Battle in East Sussex.  Known today (somewhat erroneously) as "The Battle of Hastings", the battlefield owes its survival to William the Conqueror, who founded Battle Abbey on the exact spot where Harold died as penance for the bloodshed of the Norman Conquest.  Each year, as close to the anniversary as possible, English Heritage host a large scale re-enactment of the battle.

Over the weekend of October 12th and 13th, Tastes Of History found ourselves preparing Anglo-Saxon recipes for visitors to the event to sample.  All did not go as well as we had hoped.  Persistent rain on the Friday carried on throughout Saturday, not stopping until Sunday morning.  The ground quickly became very wet under foot and the firewood equally soaked.  With a low pressure weather system set in, we lit our first fire at 09:30 am and promptly sent the next four hours fighting to get any heat to cook on.  We had planned to produce a beef casserole but the challenging conditions simply did not allow us time to do so.  Nevertheless, we were able to make a curd cheese for the Cheese Spread recipe below and eventually got the Pea Soup cooked.

There is surprisingly little contemporary writing on food of the period.  The Anglo-Saxons left us no surviving cookbooks and without one creating recipes of the 11th century is somewhat of a challenge.  Anglo-Saxon cooks, especially those in high-status households, might have had access to, or knowledge of, the Roman cookery of Apicius, which still influences menus today.  As to more contemporary sources, De observatione ciborum ("On the Observance of Foods") is a letter written by Anthimus, a Byzantine physician, in which he discusses the eating habits of 9th century France.  Other than that we have to wait until The Forme of Cury ("The Method of Cooking", cury being from Middle French cuire: to cook).  This scroll provides an extensive collection of medieval English recipes from the 14th century.  So, somewhere in between lies the cuisine of Anglo-Saxon England.


Much of our understanding of what was eaten, therefore, comes from a general understanding of the types of crops that could be grown, the animals farmed and native species that could have been foraged.  As with most early cultures, the Anglo-Saxons had wheat, barley, oats and rye to make breads, pottages, ale or beer. Such staples would have been supplemented by legumes (peas and beans), root vegetables (carrots, parsnips and turnips), alliums (garlic, leeks and onions), leafy vegetables (cabbages and lettuce), and diary products (butter, cheese and eggs).  Hunters and fishermen would have added to the variety of foods with game meats (deer and wildfowl), fish and seafood (crabs and molluscs) where proximity to such things permitted.

With all this in mind we turned to "Tastes of Anglo-Saxon England" by Mary Savilli.  This collection of recipes is inspired by the author's knowledge of Anglo-Saxon ingredients and cooking techniques.  Some of the recipes are from Latin sources but they are almost certainly very much like those used in England.  So, like the author of this cracking little book, we set out to introduce modern palates to flavours known one thousand years ago.  Should you wish to recreate the dishes, then here are the ones we were able to deliver on a wet weekend in Britain: 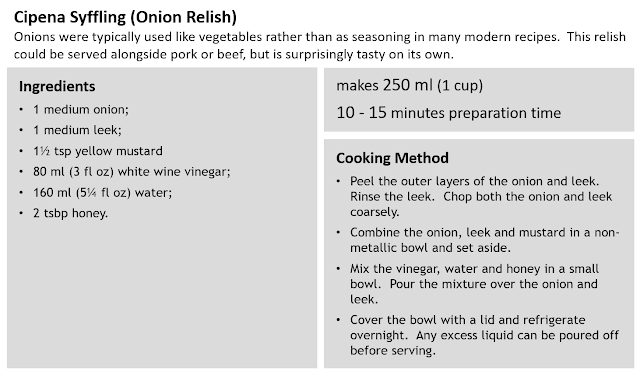 Many who sampled the Onion Relish commented that it would be a superb condiment at a barbeque. 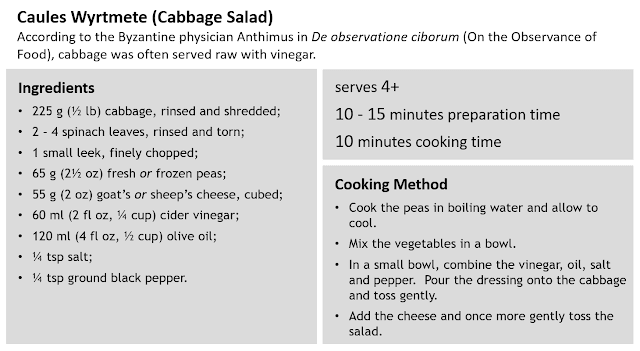 The Cabbage Salad was a surprise hit for many people despite the raw nature of the cabbage, leek and spinach.  We used feta cheese in the salad but feel that a good, hard sheep's cheese would work equally well (if not better).

To make a simple curd cheese, we have a recipe here in a piece we published on Neolithic Feasting at Stonehenge. 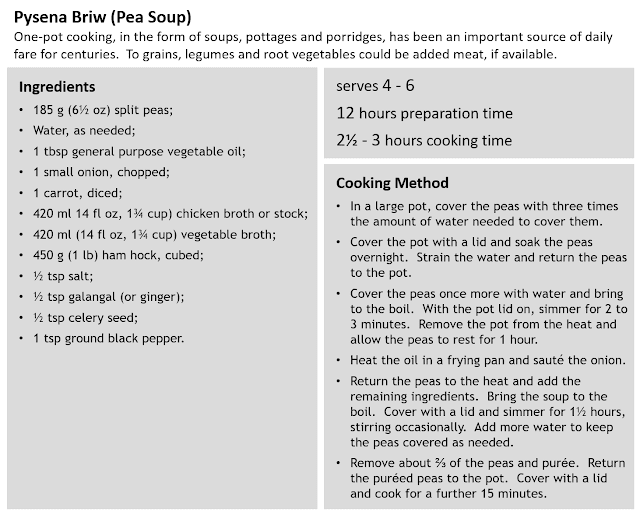 The Pea (and Ham) Soup is a perfect example of one-pot cooking and was described as "delicious" by Edward, a young gentleman of discerning taste. Thanks Edward, you made our weekend.
Posted by Tastes Of History at 17:04 No comments: