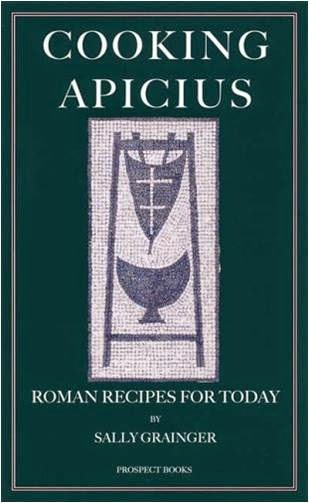 One of the tasty recipes drawn from Apicius is for "soft eggs in a pine kernel sauce" (Apicius 7.13.3).  Should you wish to reproduce this dish then you cannot go far wrong following Sally Grainger's recipe in her marvellous book "Cooking Apicius: Roman Recipes for Today".  You will need:
You'll need to soak the pine kernels in the wine overnight.  And the following day, place the pine kernels in a mortarium (or a food processor) together with the honey, vinegar and fish sauce and grind or process until smooth.  Next, roast and grind the lovage seeds, mixing them with the ground black pepper, before adding to the sauce.  Taste, and adjust the texture with the wine used to soak the pine kernels.  Shell the eggs carefully, cut them in half, and spoon a little sauce on each half.  Simple, but incredibly tasty.

Members of the Roman Military Research Society have enjoyed eating this recipe at events across the UK for many years.  Imagine our surprise when, at one such event in Skegness, a senior member of the Society presented the ingredients to be made into a lunch for all.  With a mischievous smile he gleefully announced he had but one egg with which to feed 20 people.  Before an incredulous chef he proudly produced...an ostrich egg!


As the laughter subsided, thoughts turned to just how do you soft-boil an egg weighing nearly 2 kg?  And for how long?

The answer, given that we only had tented outdoor cooking facilities, actually was quite simple.  Immerse the egg in a water filled iron cauldron sitting over a roaring wood fire.  Once the water had been brought to the boil, the egg was then fast-boiled for 45 minutes.  With the sauce made it was eventually time to remove the egg from the water, extract it from its shell and divide the content into bite-size portions ready to receive the pine kernel sauce.

Removing the shell of an ostrich egg is not as easy as you'd think, however. They're understandably tough!  In the end a Roman military dagger, pugio, was called upon to crack the shell.  Not a particularly elegant solution, more the military version of a sledgehammer to crack a nut, but the soft-boiled egg within was finally released.

And what does an Ostrich egg taste like?  Well, a bit like chicken really..!
Posted by Tastes Of History at 19:49 No comments:

In April 2005 David Sapsted, writing for The Telegraph newspaper, reported that: “Years of division among academics over whether the Romans or the Normans introduced rabbits into Britain appears to have been resolved.”  Many people, myself included, had believed for a long time that the Normans introduced rabbits for their meat and fur.  In 2005, however, an archaeological dig at Lynford, near Thetford in Norfolk uncovered the skeletal remains of a rabbit that was dated to the first or second century AD by the pottery fragments found beside it.  Some of the pottery fragments included domestic pots that could have been used for cooking, and the bones showed signs of having been butchered.  The evidence seemed to prove that rabbits had been brought to these shores by the Romans and vindicated Marcus Terrentius Varro’s (116-27 BC) account that the legions had introduced rabbits from Spain, where they had been reared in walled enclosures and served as a gourmet dish.

Although described by Pliny the Elder in his Naturalis Historia in the first century AD, it was the earlier writer and historian Polybius who first described the European rabbit (Oryctolagus cuniculus) at about the time ancient Greece fell under the sway of the Romans in the second century BC (Polybius, Histories XII.3.1):

The rabbit indeed at a distance looks like a small hare; but when taken in the hand, it is found to be widely different both in appearance and in the taste of its flesh; and it also lives generally underground.” 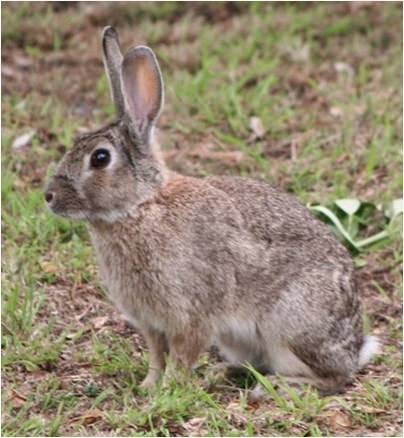 For the Romans their tastes for rabbit developed during their conquest and occupation of Hispania, modern Spain.  Here the Romans quickly acquired a taste for "laurices".  The term laurices is the plural of the Latin word laurex (variant laurix, n. masc., pl. laurices) and refers to the foetus of the rabbit prepared without evisceration and consumed as a table delicacy.bbThe Romans are known to have raised rabbits in stone walled or tiled pens, probably to facilitate the harvesting of laurices, but the industry apparently collapsed as the Roman Empire fell.

The European or common rabbit is native to south-western Europe (Spain and Portugal) and northwest Africa (Morocco and Algeria), both areas being firmly within the boundary of the Roman Empire.  Thus the Roman connection makes sense.  Surprisingly, however, there is evidence for rabbits living in Britain long before the Romans set foot on British soil.  Remains of hares and a rabbit's tooth dating back half a million years were found in excavations at Boxgrove in West Sussex and Swanscombe in Kent.  Yet in the intervening almost 500,000 years between the Boxgrove and Swanscombe and the Roman period there is no evidence of rabbits existing in Britain.  So what happened?  The most likely explanation is that rabbits died out in the last Ice Age only to be re-introduced by the Romans. 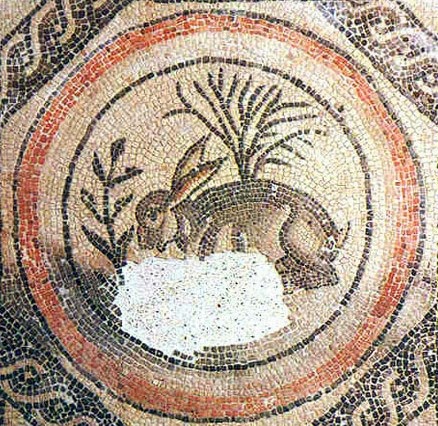 Even though the Romans imported domesticated rabbits from Iberia, there is scant evidence that any Roman rabbits escaped to the countryside and established themselves in Britain.  And as for the Normans, there is apparently no mention of the rabbit in the Domesday Book commissioned by William I (the Conqueror) in AD 1068.  So, if they are missing from post-Roman Britain, where did today’s rabbits come from?


The first Medieval references to the European rabbit in the British Isles noted that they were kept on the Scilly Isles, Lundy Island (in the Bristol Channel) and the Isle of Wight in the 12th and 13th century.  These offshore locations may have protected rabbits from predators and provided lighter soils for burrowing.  Rabbit remains were found in the excavation of a midden at Rayleigh Castle in Essex; it is possible that the rabbits may have come from islands off the Essex Coast, for example Foulness.  As for the mainland, definite records exist from about AD 1235 revealing that King Henry III had rabbits in a royal park at Guildford, Surrey.  Maintained rabbit colonies were known as cuningera or coneygarths, and written accounts indicate Henry ordered the sheriffs and bishops of various cities to supply the Court with rabbits from their coneygarths.  It was about this time that rabbit began to appear on banquet menus.  For example, it is recorded in AD 1251 that Henry III and his court ate some 450 rabbits as part of their Christmas feast.

Since then our relationship with the rabbit has continued to evolve.  Domesticated rabbits have mostly been bred to be much larger than wild rabbits, and selective breeding has produced a wide range of breeds to be kept as pets and food animals across the world.  Rabbit fur is still prized for its softness and the likes of Angora rabbits are raised for their long, soft fur, which can be spun into yarn.  So, domesticated rabbits were probably re-introduced to Britain by the Romans and then again during the Middle Ages, and over time they have been refined into the wide variety of breeds familiar to us today.
Posted by Tastes Of History at 16:45 No comments:

Tastes Of History has two aims: firstly, to bring history to life in schools, and, secondly, to experiment with, re-create and produce good food from different historical periods.
Education is the key to stimulating an interest in our history, but everyone learns in different ways. Mostly our teaching is done in primary schools, but we have delivered historical demonstrations for the BBC, Channel 4’s Time Team, English Heritage, local authorities and museums, including the British Museum and the Museum of London.


Bringing history to life using accurately researched costumes and artefacts is exciting and inspiring for children and adults alike.  The opportunity to handle everyday objects of the period, and learn how they were used, makes history more accessible and helps everyone connect with the past.  In the case of food, eating and dining throughout history can still teach us much about our ancestors and, more importantly, ourselves.
Posted by Tastes Of History at 16:01 No comments: