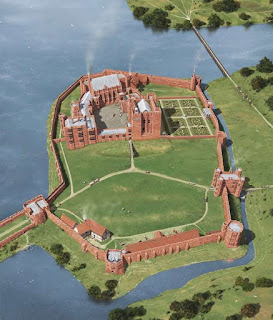 In 1563, Elizabeth I (r.1558–1603) granted Kenilworth to her childhood friend and favourite, Robert Dudley, the soon to be Earl of Leicester.  She visited four times during "progresses" through her realm - her visit in the summer of 1575 was the longest she made to any courtier during her reign - and Dudley’s embellishments to the castle and its setting were doubtless intended to impress her.  Pictured opposite is a reconstruction by Peter Urmston for Historic England of what Dudley's castle may have looked like at the time.

Over the bank holiday weekend we took part in English Heritage's celebration of Kenilworth’s Elizabethan heyday as the ultimate party palace with music, falconry displays and a feast of entertainment fit for the Virgin Queen.  Anxious to impress, Robert Dudley, Earl of Leicester, showed off the skills which made him Master of the Royal Horses, but our more modest part was to produce dishes fit a Queen and her subjects alike. Time to party like it's 1575!

Although we often refer to the "Elizabethan period", the Queen was very much a Tudor, and no Tudor meal would be complete without some form of pie.  We duly pre-prepared a "Great Pie" in honour of Her Majesty for visitors to the pageant to sample: 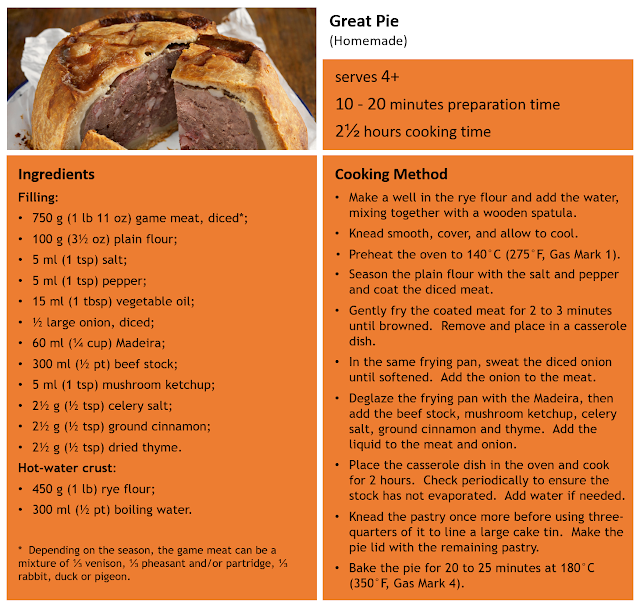 Our homemade Great Pie recipe was not taken from a particular historical source but was inspired by mediaeval and Tudor precedents.  The filling is diced mixed game supplied by The Wild Meat Company based in Woodbridge, Suffolk.  Their mix usually consists of around one third venison, one third pheasant and partridge, and one third a combination of wild duck, pigeon, and rabbit.  Added to a rich gravy, the filling was contained within a hot-water crust for baking.  Such robust pastry had to be used by Tudor cooks to form a pie crust that would hold its shape as they did not use pie tins.

Two further meat dishes were prepared.  The recipe for "Dutch Pudding" was derived from The Court and Kitchen of Mrs Elizabeth Commonly called Joan Cromwell.  It is essentially minced beef mixed with several herbs and spices that is boiled much like one would for a Christmas pudding.  The original recipe states it should be served with mustard, but a fruit sauce - blackberry or red currant - works equally well. 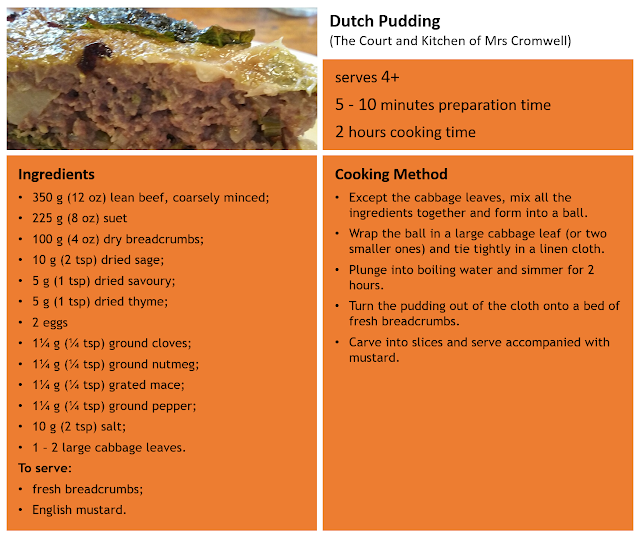 In Tudor England the name collops referred specifically to thick slices of bacon. Just before Lent, with its restrictions on what could and could not be eaten, it was the tradition to use up those foods that would spoil over the period. For the Tudors it soon became the custom for slices of bacon to be fried and served with eggs, usually for breakfast, on Collop Monday. In one way this could be considered the forerunner of today's full English Breakfast. Nevertheless, the leftover bacon fat would be used the following day, Shrove Tuesday, to make pancakes. Our "Scotch Collops" echoes a traditional Scottish dish that uses either mince or thin slices of either beef, lamb or venison. Today Scotch Collops are often served garnished with thin toast and mashed potato. Oddly, having been introduced to Britain around 1588, potatoes were often regarded with suspicion, distaste and even fear. Generally considered unfit for human consumption, they were used only as animal fodder or as sustenance for the starving. 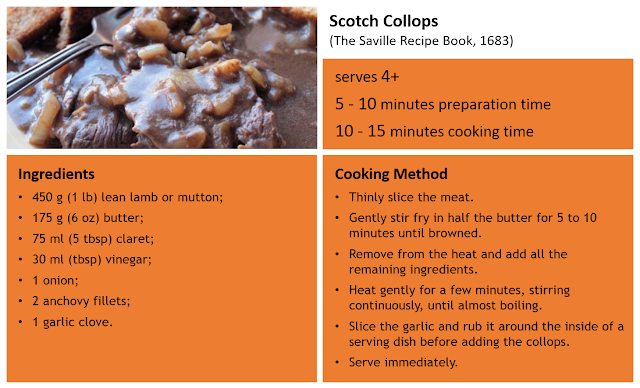 Parsnips have been cultivated and eaten in Europe for thousands of years  For fashionable Tudor tables parsnips might be plain-boiled, then stewed with a variety of flavours often intended to mask their original flavour.  For the Pageant we prepared parsnips in wine vinegar.  Ideally we would have used verjuice, a highly acidic juice made by pressing unripe grapes, crab-apples or other sour fruit.  In the mediaeval and Tudor periods it was widely used as an ingredient in sauces, as a condiment, or to deglaze preparations. 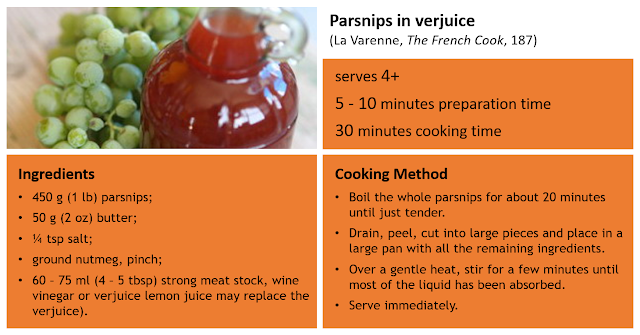 To compliment the parsnips, we introduced pickled mushrooms to the Pageant's visitors.  For those who dislike the texture of mushrooms, but brave enough to try them, the pickling in white wine and spices proved something of a surprise.  The combination of flavours makes an interesting addition to any Tudor (or modern) feast. 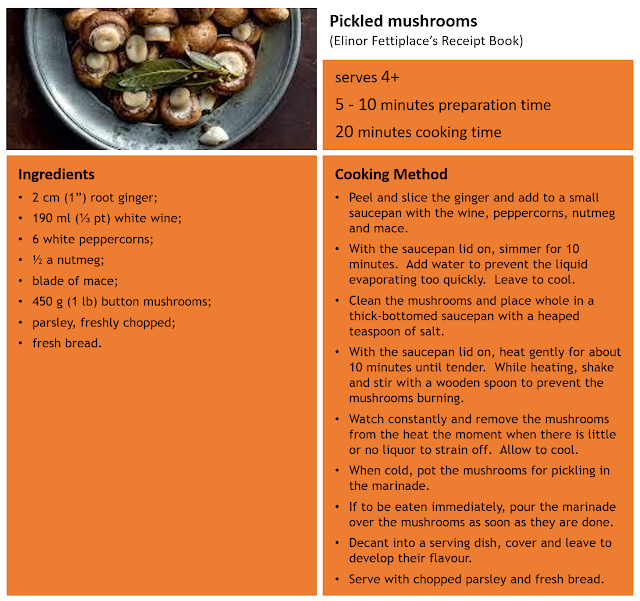 To complete the presentation, we pre-prepared a Spice Cake inspired by Robert May's The Accomplisht Cook.  Although strictly speaking a Stuart era recipe, the use of so many expensive imported spices in a fruit cake had been popular with aristocratic Tudors to showcase their wealth. 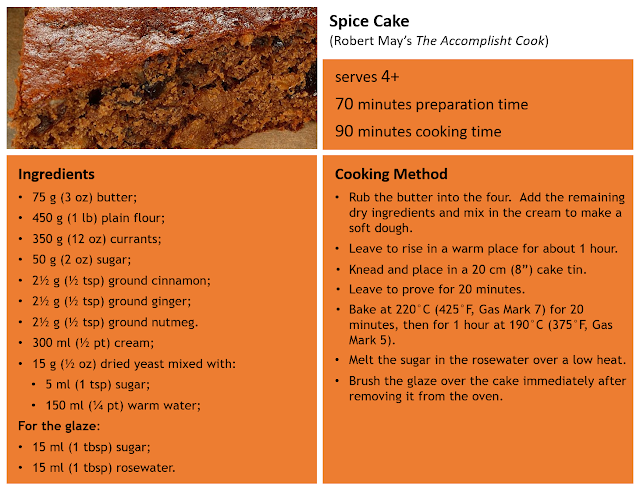 All in all we spent an enjoyable weekend catching up with old friends, meeting some new ones and revelling in the glorious bank holiday sunshine.  We hope you will be inspired to recreate these wonderful recipes to impress your guest at table.
Posted by Tastes Of History at 19:50 No comments: