A Brief History of Foods: The Chilli Pepper

The chilli pepper (from Nahuatl chīlli /ˈt͡ʃiːli/) is the fruit of plants from the genus Capsicum, members of the nightshade family, Solanaceae. 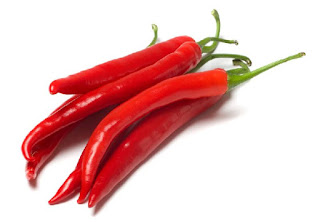 Chilli peppers have been a part of the human diet in the Americas since at least 7500 BC.  The most recent research shows that chilli peppers were domesticated more than 6000 years ago in Mexico, and were one of the first self-pollinating crops cultivated in Mexico, Central and parts of South America.

Christopher Columbus was one of the first Europeans to encounter them during his second voyage to the West Indies in 1493.  He called them "peppers" because they, like black and white pepper of the Piper genus known in Europe, have a spicy hot taste unlike other foodstuffs.  On their introduction into Europe, chillies were grown as botanical curiosities in the gardens of Spanish and Portuguese monasteries.  Later the monks experimented with the chilli culinary potential and discovered that their pungency offered a substitute for black peppercorns, which at the time were so costly that they were used as legal currency in some countries.

The spread of chilli peppers to Asia was most likely a natural consequence of its introduction to Portuguese traders (Lisbon was a common port of call for Spanish ships sailing to and from the Americas) who, aware of its trade value, would have likely promoted its commerce in the Asian spice trade routes then dominated by Portuguese and Arab traders.  Today chilli peppers are an integral part of South Asian and Southeast Asian cuisines.