What to do with leftover lamb from Sunday's roast? Obviously, make an 18th-century curry. The version below is a variation of one by Hannah Glasse (1708-1770) for a mild chicken curry. Our recipe uses a delicious curry mix from The Copper Pot, purveyors of fine historic foods. 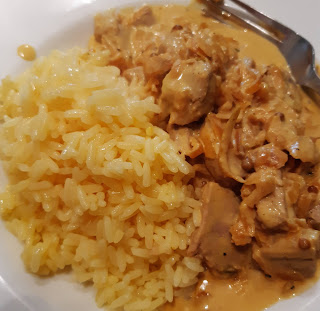 Curry was introduced to English cuisine starting with Anglo-Indian cooking in the 17th-century as spicy sauces were added to plain boiled and cooked meats[1]. The 1774 edition of Hannah Glasse's "The Art of Cookery made Plain and Easy" contains one of the first recipes in English "To make a Currey the India Way". As Empress of India, Queen Victoria was an early champion of curries, adapted to the English palette. With her endorsement, curry became increasingly popular in all classes of British society.  Today curry is considered a national dish.
Lamb Curry with Saffron rice Ingredients:
Lamb, diced; 25 g (1 oz) butter; 150 ml (¼ pint) lamb stock; 200 ml (7 fl oz) double cream; Plain rice; Saffron, pinch. Method:
Dice the cooked lamb into bite-size pieces and set aside. Melt 25 g of butter in a frying pan. Add the curry mix and fry for about 10 seconds. Add the stock and bring to a boil. Simmer for 20 minutes. Add the cream and the cooked lamb pieces. Simmer for a further 10 minutes then serve. Concurrently cook plain rice with a pinch of saffron. With the rice cooked and drained we actually returned it to the pan and added some butter as an extra creamy treat. Being honest, the accompanying picture does not do the result justice which is delicious. Notes:
1. Collingham, L. (2005), Curry: A Biography, London, p.115.
Posted by Tastes Of History at 11:34 No comments:

Introduction A few days ago, CNN Africa tweeted "The fringe theories long attached to UNESCO sites"[1] introducing readers to some of the ancient sites around the world that hold mysteries which have inspired fringe theories involving aliens. The CNN article establishes early on (and throughout the article) that archaeologists have other ideas; the Giza pyramids in Egypt, Aztec Teotihuacan in Mexico and the Nascar Lines in Peru all have human origins. But why do these fringe theories pointing to alien intervention persist?

In essence, these claims can be traced back to 1968 when Erich Von Däniken published "Chariots of the Gods" in which he argued that extra-terrestrials influenced ancient sites, including the pyramids of Giza. Von Däniken proposed that aliens offered technological help in building them. While archaeologists and scientists are generally united in rejecting the aliens idea, also referred to as the "ancient astronaut theory", Von Däniken's ideas have endured. They have, for example, spawned fifteen series (or 190 episodes) of the television programme "Ancient Aliens". In each episode, produced by Prometheus Entertainment, this documentary style series presents hypotheses of ancient astronauts and proposes that historical texts, archaeology, and legends contain evidence of past human and extra-terrestrial contact. Since the show's pilot in 2009, and its apparent popularity, "Ancient Aliens" has been widely criticized by historians, cosmologists, archaeologists and in other scientific circles for presenting and promoting pseudoscience, pseudohistory and pseudoarchaeology. Sadly, the fictions peddled by von Däniken, his adherents, programmes like "Ancient Aliens" and conspiracy theorists have a persistent popularity that led history professor Ronald H. Fritze to observe: "In a pop culture with a short memory and a voracious appetite, aliens and pyramids and lost civilizations are recycled like fashions."[2] Unsurprising then that the media exploits this "voracious appetite" for commercial gain, using salacious headlines and titillating programme titles to grab the fleeting attention of potential customers.

Pyramids Across the globe numerous ancient monuments and megalithic ruins, such as the Giza pyramids of Egypt, Machu Picchu in Peru, or Baalbek in Lebanon, the Moai of Easter Island and Stonehenge, are cited as the evidence for the existence of ancient astronauts. The advocates and supporters of Von Däniken argue that these stone structures could not have been built with the technical abilities and tools of the people of the time, and many could not be duplicated even today. They suggest that the large size of the building stones, the precision with which they were laid, and the distances many were transported leaves the question open as to who constructed these sites. What such arguments seem to ignore is that our ancestors did not face the modern commercial pressures and financial penalties for not delivering a project on time. In fact they had lots of time. Construction of the Great Pyramid of Pharaoh Khufu, the oldest and largest of the three pyramids in the Giza pyramid complex, took up to a mere 20 years to complete. Stonehenge by contrast went through a number of iterations, between 3,000 and 2,000 BC, taking a thousand years to reach the form familiar to us today. If it took, let's say, 100 years to move the bluestones from the Preseli Hills in Pembrokeshire, Wales the 240 km (150 miles) to the construction site on Salisbury Plain in Wiltshire, then so what? In the case of the pyramids, if it took a team of stonemasons weeks to shape a limestone block so that it fits tightly with its neighbours, then that is how long it took to achieve such precision. Put simply, our ancestors perceived time differently to us - perhaps in terms of the lifespan of a person or the annual cycle of the seasons - and thus were not constrained by modern precepts.

Ockham's razor Mainstream archaeologists have rejected Von Däniken for many years, retorting that ancient Egyptians, for example, developed their remarkable building tradition with no help from extra-terrestrials. In one sense adding "ancient astronauts" into the mix overly complicates the narrative. Surely the law of parsimony (or Ockham's razor if you prefer) would argue that the idea visitors living millions of light years away would travel such vast distances just to "teach" or "show" humans how to build these monuments is preposterous. Returning to pyramids as our example, that different people in different parts of the world could build similar structures speaks more to the universality of human thinking[3] than the need for alien explanations. Faced with similar engineering problems, our Egyptian and Meso-American ancestors produced similar engineering solutions. In its simplest form the pyramid shape is a natural evolution from a mound or pile to a structure that is relatively easy to design and build. Before the great pyramids, the wealthiest Egyptians were buried in structures called "mastaba" - stepped layers of stone or mud brick placed over the person's tomb. While some were small, others could be very large. Adding incremental layers eventually resulted in a prototype pyramid that would be refined, with mistakes on the way, to become the Great Pyramids at Giza. It seems disingenuous to dismiss the efforts of Egyptian and Meso-American as if they were unable to problem solve without external help. Worryingly, as Professor Sarah Parcak[4] has observed: "The belief that aliens built the pyramids, or in fact any ancient monument, is deeply racist."

Problem Solving Parcak also thinks that aliens are a distraction from the real wonders of archaeology, which is not a mystery but a puzzle that takes time to put together. Like any investigation there are "known knowns" (the things we know we know), there are "known unknowns" (we are aware there are some things we do not yet know), and then there are the "unknown unknowns" (the things we don't know we don't know). We know, for example, that there are gaps in both the historical and archaeological records, but work continues to answer these unknowns and fill the gaps in our understanding. Unfortunately this can take time, perhaps decades, before any consensus is reached. Meanwhile, as the academic debate goes unresolved, the "ancient aliens" devotees are given a window of opportunity to insinuate their beliefs, fringe theories and uncorroborated "evidence" into those knowledge gaps. For example, proponents for the existence of ancient astronauts[5] argue for the inclusion of evidence such as archaeological artefacts that they deem anachronistic, or beyond the accepted technical capabilities of the historical cultures with which they are associated. These are sometimes referred to as "out-of-place artefacts"[6] and include evidence from artwork and legends that are interpreted as depicting extra-terrestrial contact or technologies. Such evidence is usually presented articulately and plausibly, often with a degree of theatre that is so appealing to the media and its audience. For most people the headline is enough proof, but for those alert to questioning the evidence, then the flaws and cracks become quickly apparent (remember Ockham's razor). Why is it that humans could not have developed the technology or skills? Why would humans not have the mental capability to solve complex problems without extra-terrestrial help? Why would aliens travel such vast distances in the past to "guide" our forebears, but not so much in modern times when the chance of being detected, questioned or challenged is more likely? Are there are simpler explanations for the widespread belief in gods that do not require ancient astronauts? Yet, with no one to contradict the proponents of the "ancient alien" argument[7], the modern desire for instant gratification and distraction offers this pseudoscience a pernicious foothold in popular culture. Perhaps the final word should go to the late Carl Sagan, who once thought the theory was plausible but would later disavow those who speculated wildly without providing solid, verifiable evidence. As he famously said, “extraordinary claims require extraordinary evidence.”

3. The brain size of all Homo sapiens has varied little in roughly 50,000 years since the appearance of modern humans at the start of the Upper Paleolithic. It is not unreasonable that the intellectual and cognitive skills, like anticipatory planning, thinking and acting, can be attributed to humans across the globe even if they are separated by vast distances and the oceans.

4. Professor of Anthropology at the University of Alabama at Birmingham.

7. From our experience, we spend a great deal of effort correcting many of the popular misconceptions about history. For most historians, archaeologists and scientists, however, they simply do not have the time, or energy, to continually debunk the "evidence" every time it is presented or resurrected.

Posted by Tastes Of History at 15:41 No comments: