It is widely held, and often repeated, that ancient Britons, and most especially the Picts, painted or tattooed their bodies with Woad.  We all know that, right?  Depictions on television and in film of the Iron Age or Roman period nearly always show the indigenous tribespeople painted in "mystical" blue designs.  It seems, however, that the evidence for such Woad inspired body art is not as “rock solid” as one might have hoped, even if it persists in some “Celtic” scholarly circles.


What’s in a Name?  The meaning of the term “Pict” is not universally agreed, and what the Picts called themselves is not yet known.  Evidence for the name derives from the Latin word Picti that first occurs in a panegyric written by Eumenius in AD 297 and is taken to mean "painted or tattooed people" (from Latin pingere "to paint"; pictus, "painted", cf. Greek "πυκτίς" - pyktis, "picture").  Yet, there is no contemporary evidence supporting the assertion that peoples living in the far North of Britannia, or indeed further South, painted their bodies at all.  And there is equally little evidence for their preferred medium.  As Foster (1996) notes[1]: "Much ink has been spilt over what the ancient writers meant by Picts, but it seems to be a generic term for people living north of the Forth-Clyde isthmus who raided the Roman Empire." 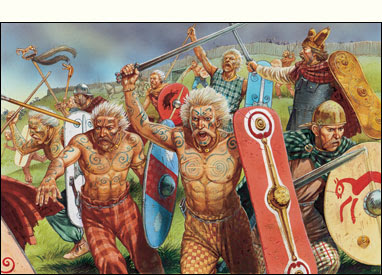 But what about Woad?  "All the Britons dye their bodies with Woad, which produces a blue colour and gives them a wild appearance in battle," so reports Gaius Julius Caesar.  Except, in his Commentaries[2], Caesar penned the phrase: "Omnes vero se Britanni vitro inficiunt, quod caeruleum efficit colorem," which roughly translates as: "All the British dye themselves with glass, which produces a blue colour."  The word "vitro" is derived from the Latin word "vitrum" meaning a type of blue-green glass favoured by the Romans.  It is only much later that scholars began to equate "vitrum" with Woad (Isatis tinctoria), an indigenous plant that produces an indigo/blue dye from its leaves.  Sadly, many modern lexicons now assert this as fact such that "vitrum" is given a subsidiary meaning relating to Woad that is both incorrect and misleading.
Being generous, Caesar may have been trying to describe some form of copper- or iron-based pigment that the local Britons may have employed to "paint" or "tattoo" their fair skins.  Yet even this is a stretch as we shall discover.  It is also worth noting that Caesar’s operations (really a "reconnaissance-in-force") only extended to the county of Kent in southeast Britain, which would have meant they encountered a fairly limited pool of indigenous people from which Caesar could attribute the practice of body-painting to "all Britons".  Just as important, his Commentaries were written more than 300 years before the first mention of the "painted ones", or Picts, appear in history.  So, despite a highly evocative image, we cannot, in good faith, use Caesar’s account of his short time in Britain as reliable evidence.
Woad: What is it good for?  Lambert (2004)[3] notes that Woad makes a wonderful indigo coloured dye for materials, a safe, biodegradable natural ink, and is also quite useful as a wood preservative apparently.  What it is not good for is a body paint or tattoo ink.  It is extremely caustic such that if used as tattoo ink it literally burns itself to the skin’s surface, and although it heals quickly, an excessive amount of scar tissue can result.  Sadly, none of the scarring is coloured blue.  Put simply - don’t try this at home!Moreover, reading the on-line experiences of those who have been keen to achieve the "authentic" ancient British look, most report that Woad as a body paint streaks easily, or simply dries too quickly and flakes off the skin[3][4].  Rather than producing the mysterious swirling patterns of common folklore, Woad dye does not even seem to stain the skin very effectively at all.  The image one is left with is hardly that of the battle hardened, tattooed and fearsome warrior à la Hollywood’s “Braveheart” or “The Eagle”; more one of tear-streaked mascara!
Another accepted "fact" often cited centres on the belief that Woad would have been used for its medicinal and psychoactive properties.  Once again, it is often asserted that the Britons/Picts painted themselves all over with Woad, which put them into an altered state of mind for fighting and equally kept their wounds from becoming infected.  Yet, once more, neither of these "facts" can be substantiated.
As Lambert points out[3], Woad is simply not a strong hallucinogen as some popular accounts would have us believe.  At best, it could be described a mild psychotropic, but reports of Woad induced ancient battle frenzy - the original Woad Wage! - or modern festival "madness" have been greatly exaggerated.  All in all, the only real possibility is that Woad might have been used on the battlefield as a possible wound cauterising agent on account of its astringent properties - the same properties that make it a very poor tattoo ink.  That it would be antiseptic in its blue form is also doubtful, however.  To produce indigo, for example, Woad has to be mixed with ammonia, the ancient sources for which would be most likely urine and dung.  Woad’s caustic nature and this heady mix of ingredients do not naturally encourage its use as an antiseptic.  For those brave warriors, or the foolhardy, determined to use Woad as such, you might wish to consider what you are planning to protect yourself from.  After all, in battle, protection against a few scratches that might become infected is probably the least of your worries.  Be more concerned with 30cm of sharpened Roman steel puncturing your soft, squidgy bits!  So, if body-paint or tattoos were used, then their "protection" most likely stems from a belief in "magically" warding off mortal wounds.
If not Woad, then what?  Although the use of Woad as a body-paint or tattoo ink is highly improbable, clearly our ancestors did tattoo or "paint" themselves.  Perhaps the most famous tattooed ancient is Ötzi the Iceman, who died high in the Italian Alps more than 5,000 years ago.  Ötzi is covered with more than 50 tattoos in the form of lines and crosses made up of small incisions in his skin into which charcoal was rubbed.  Because they are all found on parts of the body that show evidence of a lifetime of wear and tear - the ankles, wrists, knees, Achilles tendon, and lower back, for example - it’s thought that Ötzi’s tattoos were therapeutic, not decorative or symbolic.
The Scythian Pazyryk of the Altai Mountain region were another ancient culture that employed tattoos.  In 1948, the 2,400-year-old body of a Scythian male was discovered preserved in ice in Siberia, his limbs and torso covered in ornate tattoos of mythical animals.  Then, in 1993, a woman with tattoos, again of mythical creatures on her shoulders, wrists and thumb, and of similar date, was found in a tomb in Altai.  The practice is also confirmed by the Greek writer Herodotus c. 450 BC, who stated that amongst the Scythians and Thracians "tattoos were a mark of nobility, and not to have them was testimony of low birth." 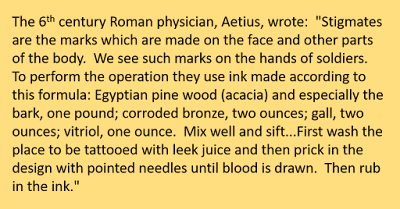 This was echoed by upper class Romans for whom tattooing was vulgar and associated with marginal groups or foreigners.  For ancient Greeks and Romans, therefore, tattoos (Lat. "stigmata") were used largely as visible signs marking someone as "belonging" either to a religious sect, to an owner in the case of slaves, or as a punitive measure to mark someone as a criminal.  In late antiquity[5], however, the Roman army appears to have adopted the practice of tattooing soldiers, albeit not until after they had completed basic training and found worthy of the effort[6].  Given that the army consisted largely of mercenaries at this point, soldiers may have been tattooed so deserters could be identified.  Whatever the reason, the fashion adopted by Roman soldiers spread across the Roman Empire until the emergence of Christianity.  Considered to "disfigure that made in God's image" tattoos were banned during the reign of the Emperor Constantine (AD 306-373).
Where traces of tattoos survive, they do seem to indicate a dark or black pigment such as soot was introduced into the pricked skin, but clearly this would not produce the blue pigment of vitrum noted by Caesar.  The use of Copper or Iron has been proposed since both would result in a colour much closer to that sought.  Unlike the indigo dye from Woad, the colour achieved with Copper is both more attractive and the pigment more usable as either a body paint or tattoo ink.  But a word of caution before going for that authentic Copper Age look.  Ancient Copper would most likely contain traces of arsenic which, if introduced to the skin, and with prolonged exposure might lead to an unwelcome, and rather poisonous, side-effect.
So, what can we conclude?  Did our ancient forebears use some form of body marking?  Yes - although the archaeological evidence seems to suggest tattooing was performed for therapeutic or religious reasons rather than as simple body adornment.  Was Woad the body-paint or tattoo ink of choice for ancient Britons and their northern Pictish neighbours?  Almost certainly not - it performs poorly as a body-paint, is too highly caustic for a tattoo ink, and in neither case would a blue colour result.
So why does Woad hold such sway?  Put simply, far too few people, including many "Celtic" scholars, have actually considered challenging the "facts" that have derived ultimately from a mistranslation of Caesar.  Most are happy to hold as "true" the accepted version of later antiquarians, and so the myth is perpetuated by modern authors, television documentaries and, of course, that scourge of historical accuracy, film and TV.
While there are more archaeologically attested pigments that could be used, Woad still retains a certain power.  There is a certain romance to the vision of the ancient British warrior, striped to the waist, his muscular frame outlined in swirling blue mystical patterns, ready to battle the armoured invader.  It is the stuff of legend...or is that myth.
References:
1. Foster, S.M. (1996), Picts, Gaels and Scots: Early Historic Scotland, London, Batsford.
2. Caesar, G.J, (58-49 BC), Commentāriī dē Bellō Gallicō (Commentaries on the Gallic War), Book 5, Chapter 14.
3. Lambert, S.K. (2004), “The Problem of the Woad”, www.dunsgathan.net/essays/woad.htm
4. O’Brien, L (2018) “Celtic Woad - an Authentic Resource?”, https://loraobrien.ie/celtic-woad-an-authentic-resource/
5. The second through the eighth centuries AD.
6. Publius Flavius Vegetius Renatus, Epitoma Rei Militaris, Book I.
Posted by Tastes Of History at 12:11