The design of Dionysios of Alexandria’s “Polybolos” is somewhat unique in the annals of ancient artillery. The very name “Polybolos” or “multi-shooter” implies this weapon, most likely a torsion bolt-shooter, had some form of repeating action. As described by Philon of Byzantium in his work “Belopoietica”, it was an automatic repeating straight-spring catapult that could launch arrows in succession. It employed “a double-chain drive, a cam mechanism translating linear into rotary motion, and automatic systems for feeding the bolts and engaging and releasing the trigger.”[1] 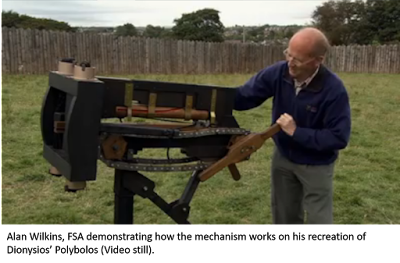 Armed with Philon’s description, a working Polybolos was reconstructed by Alan Wilkins, FSA. It has a rotating roller with two slots (one lengthwise and one helical) and a wooden case that held the missiles. On both sides of the case it had two pairs of pentagonal sprockets (gears) connected by a wooden chain. A pin on each chain was connected at the same point with the slider of the catapult.

With the forward rotation of handspikes on a windlass, which is connected to the rear sprockets, the slider moves automatically forwards, whereupon a pin attached to the slider engages and follows the helical cam groove of the roller above. The roller rotates clockwise until the lengthwise slot is aligned with the corresponding opening of the bolt case, or magazine, at which point gravity feeds a bolt into the longitudinal groove. As the slider reaches the extent of its forward motion, the bow-string is fed beneath the claw-like fingers of the trigger. Another pin engages the trigger release lever locking the claw over the bow-string.
Rotating the windlass in the opposite direction reverses the direction of the chain drive to pull the slider rearward and, in so doing, rotates the roller anticlockwise. When the longitudinal slot is aligned with the groove in the slider an arrow is gravity fed onto the latter. The slider continues rearward until a fixed pin engages the protruding lever of the trigger mechanism freeing the claw to pivot upward and release the bow-string. At this point the twisted skeins of sinew-rope propel the two bow arms forward dragging the bow-string along the slider to discharge the bolt. The continuous backward and forward rotation of the windlass in this way enables an operator to launch a succession of bolts relatively swiftly.

The chain drive mechanism produces an impressive rate of fire when compared with a reproduction of a standard three-span Vitruvian catapulta. Testing by members of The Roman Military Research Society (THE RMRS) revealed that Wilkins’ Polybolos could shoot six bolts in the time taken to discharge two using the Vitruvian machine and a two-man crew. With this impressive rate of fire there must have been a very sound reason for the Polybolos not continuing in service after the third century BC.

Why, then, was the Polybolos unsuccessful? The main problem seems to be that it did not offer a huge technological leap forward in firepower. While one man can singlehandedly operate the Polybolos, the semi-automated loading and firing process results in the string being drawn at essentially the same rate as other non-automated machines. Allowing gravity to feed the bolts is therefore not much faster than allowing a loader to place them on the slider against the bow-string. Moreover, the non-automatic system allows the ballistariae more time to aim between shots. Philon makes the claim that the Polybolos was too accurate ("...the missiles will not have a spread..."), but one could argue whether Philon ever saw the machine in action, because there is no way that successive bolts would stay in a tight group except at close ranges[2]. Indeed, well before the maximum range quoted by Philon - "...little more that a stade", approximately 200m - the bolts would have spread out, as they can be seen to do when shooting modern reconstructions of standard, non-automated, bolt-shooters[3]. The Polybolos is clearly a much more complicated machine, with many more constituent parts, than the standard bolt-shooter. It would have been be more costly to construct and maintain. For example, the Wilkins’ reconstruction used about 150 pins to join the links of the two chain drives, and that may be the Achilles heel that led to its not having "found a noteworthy use" by Greek, or indeed Roman armies. Every pin would have to withstand the strain of drawback, and if even one pin snapped - literally “the weakest link” - then the machine would be out of action.

Yet it is intriguing to know whether a full power Polybolos would be a viable weapon. Having seen Alan Wilkins’ reconstructed Polybolos in action several times over the years, and having been lucky enough to actually operate it, it is a complex yet elegant machine whose action is simple to master, but not without its problems.

Firstly, most, if not all, reconstructions of the Polybolos appear severely underpowered. This is not a criticism of the reconstructions themselves, or of their builders, since most of these machines are simply proofs of concept, full size working models if you prefer, aimed at “bringing to life” Dionysios’ invention. Their constructors did not necessarily set out to reproduce a fully tensioned catapult. Rather, most seem intrigued by the concept and determined to investigate how all the complex parts might have fitted and worked together.

Actually, this does make some sense as the mechanism was/is an unknown quantity. The precise materials used in its construction[2] are not known, although we can infer much from the parts  of ancient catapults that do survive. Nor do we know how robust these different parts were or needed to be. We have no idea whether the whole mechanism could have coped with the stresses on the individual components or whether it could have operated efficiently with the amount of potential energy stored in fully tensioned sinew-rope springs. There is the inherent danger of the machine literally destroying itself under tension. Until foolhardy individual builds a full power catapult fitted with the automated loading/release system this will remain a "known unknown".

All of the above, however, has been a preamble to a long running thought experiment. Taking the Wilkins Polybolos as the benchmark, it is fairly obvious from shooting this particular example that the bolts do not fly very far, about six metres rather than the hundreds for an effective war machine. This is hardly surprising since the spring frame is deliberately underpowered for reasons of safety when being demonstrated in public.  The performance is not helped as the Wilkins example, and all similar reconstructions, uses flightless bolts. Once again this is not that surprising. The automated feed system, with its magazine and grooved roller, would appear to rule out the use of fletches, fins or vanes. The absence of fletching will adversely affect the aerodynamic stabilisation of bolts or darts, however.  Thus we are left o question what would happen if flightless bolts were used in a fully tensioned Polybolos? How would they perform? Would they be stable in flight? Would the bolts fly true? How accurate would the catapult prove to be, and what range could be achieved? Answering these questions would certainly demonstrate the viability, or not, of a fully tensioned Polybolos as a weapon.

As stated, two or more fletches or vanes fixed proud to the bolt shaft, much like a standard arrow or crossbow quarrel is configured, would foul the magazine-fed system. So, could the fletches or vanes be incorporated into a bolt to generate the missing in-flight ballistic stabilisation? The inspiration for a possible solution to this problem came from a somewhat unlikely source, namely the “Hale Rocket”. 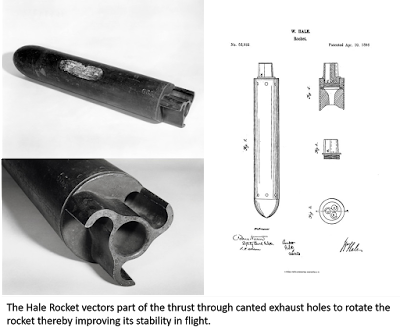 In 1844, William Hale (1797-1870) patented a new form of rotary rocket that improved on the earlier Congreve rocket design. Hale removed the stabilising guide-stick from Congreve’s design and vectored part of the rocket's thrust through canted exhaust holes to provide rotation of the rocket, which improved its stability in flight[4]. The three curved fins, reminiscent of arrow fletches, were. most notably, in-line with the rocket’s cylindrical body. Could a similar configuration be used for the shaft of a Polybolos bolt? Could the fletching or vanes be fixed to a reduced diameter shaft so as not to foul the feed system, and would this actually work?

The mock-up shown below is based around a bolt recovered during the 1922-1937 excavations in the Roman garrison town and Sassanid siege-works at Dura-Europos in Syria. A tapered wooden shaft may not be the most appropriate for the feed system but the thicker rear section ought to act as a useful counterweight to balance the iron bodkin. Experiments with both tapered and parallel shafts would be necessary to determine the most efficient bolt design. Four fletches or vanes (shown below in black) are proposed for symmetry. The shaft at the point where the fletches/vanes are adhered would need to be of sufficient diameter so that the bow-string connects with the bolt shaft and not the fletches/vanes. The latter circumstance would undoubtedly lead to a potentially dangerous misfire.

An alternative might be taking a standard bolt with an untapered shaft and incorporate the vanes along its axis. The example shown below uses a bolt 46 cm long typically associated with a one-cubit, or two-span, catapult. Three offset vanes have been carved into the shaft such that sufficient mass of material is retained to resist the propelling force of the bowstring acting on the shaft. 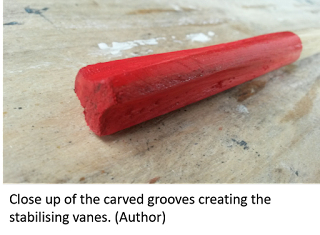 The next step will be to produce a number of example bolts and shoot them. Future tests will aim to prove the concept and determine which of the two bolt designs will: (1) feed cleanly from the Polybolos' magazine, (2) engage with the mechanism, (3) shoot safely, and (4) improve in-flight stability.

Notes:
[1] Wilkins, A. (2003), Roman Artillery, Shire Archaeology, Princes Risborough, p. 8.
[2] There is little or no evidence beyond Philon’s description to prove the Polybolos was anything more than an idea. Most likely it was an unrealised one.
[3] As with many automatic weapons systems, the Polybolos does tend to launch multiple bolts consistently at the same point in space. While this does produce a rather desirous “mean point of impact”, it is less than ideal if the intention is to engage and hit multiple targets in rapid succession.
[4] Winter, F.H. (1990), The First Golden Age of Rocketry: Congreve and Hale Rockets of the Nineteenth Century, Washington and London: Smithsonian Institution Press, p. 321.
Posted by Tastes Of History at 14:36 No comments: