Dispelling Some Myths: The Game of Quoits 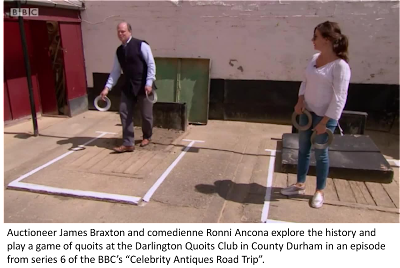 The history of the game of quoits appears, on the face of it, to have an ancient origin. At least that is what you would believe from several website authors who attribute the game's invention to ancient Greece.  Foremost among these is The United States Quoiting Association (USQA.org) whose history of the game may well be "patient zero" upon whom many others have relied.  It certainly seems to be the case for researchers on the BBC's Celebrity Antiques Road Trip.  For example, about 30 minutes into the episode in Series 6 featuring comediennes Ronni Ancona and Jan Ravens, it was stated that quoits "originated in the ancient Greece...[and] was one of the five games of the pentathlon."  Having never come across this fact before, the alarm bells to start ringing.  Quoits in the ancient Greek pentathlon - are you sure?  It just did not seem right.

An initial search found one of the more comprehensive histories of the game on the USQA.org's website.  This particular history seems to be oft repeated source used by other web authors so a closer study of the content was in order.  According to the opening statement: "the origins of the Quoit can be traced back to the very ancient Chakram, a ring-shaped metal blade used as a weapon of war, and later in history, to the discus throw of the ancient Greek Olympics."

Modern ring quoits as used in the Northern English game, and shown in the image above, do look at lot like the Indian chakram.  According to the Wikipedia entry, however, the earliest references to the chakram come from the Indian epics Mahabharata and Ramayana where the Sudarshana Chakra is the weapon of the god Vishnu.  The Mahābhārata is an epic legendary narrative of the Kurukṣetra War and the fates of ancient India’s Kaurava and Pāṇḍava princes.  The oldest preserved parts of the text are thought to be not much older than around 400 BC, though the oral origins of the epic probably fall between the 8th and 9th centuries BC[1].

Other than a general likeness - both chakram and quoit are disc-shaped, and thrown - there is little evidence to suggest that the latter evolved from the former.  So, if an Indian origin is unlikely, then what about ancient Greece?

USQA.org goes on to state: "The Discus was also referred to as a Quoit in many Greek writings and mythological tales.  In its original form it was a flat, tapered disk made of stone, iron, or bronze." 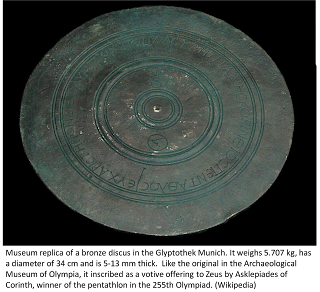 It is doubtful that the term “quoit” was ever used by ancient authors as the ancient Greek word δίσκος (discus) rather does the trick.  The confusion may be a more modern one stemming from the nouns "quoit" and "discus" being used synonymously today to refer to a flat disc that is thrown.  USQA.org is correct, however, to describe the original ancient Greek discus being of stone, while later examples were made in bronze (pictured left), lead or iron.  Excavated examples of discusses have diameters ranging between 17 cm and 35 cm and weights of 1.3 kg to 6.6 kg.  The average appears to be 2.5 kg, which is ½ kg above the minimum weight of a modern discus.  The weight differences are easily explained as each city-state (poleis) had his own standard, while the discusses for boys were understandably lighter than those for adults.  Three official, standard weight, discusses were kept in the Sikyonian treasury[2] for use at the Olympic games supposedly to make competition fairer.

USQA's history continues by stating: "The Discus was by far the most popular event of the Olympic games, so many spectators who watched the athletes perform the Discus throw in competition eagerly sought to imitate the sport at home."

Once again, no.  The discus throw was not a separate event as it is in today’s modern Olympics.  Instead it was part of the ancient Olympic pentathlon (Greek: πένταθλον) comprising five (pente-) competitions (athlon) contested over one day.  Significantly, the first pentathlon was held at the 18th ancient Olympiad around 708 BC, which clearly pre-dates any written reference to the chakram’s origin (see above).  By the 77th ancient Olympiad, the pentathlon was generally ordered into three sections: the stadion foot race, the triagmos of the long jump, javelin throw and discus throw, concluding with wrestling.

So, rather than "later in history", the discus throw clearly has much earlier roots.  Moreover, the only way the discus throw could be "the most popular event of the Olympic games" is if the pentathlon was by far the most popular competition, which it seems it was not.  Apparently pentathletes were considered inferior to those athletes who specialized in a certain event.  As to popularity, the pankration, introduced in the 33rd Olympiad (648 BC), was one of the most popular events: Pindar wrote eight odes praising victors of the pankration[3].  While horse racing and chariot racing were the most prestigious competitions in the games.  It is unlikely, then, that ancient Greeks from all walks of life "eagerly sought to imitate the sport at home".

Yet, if the discus throw is the ancestor of quoits, then there was clearly a significant rule change.  The ancient Greek competition, for example, required the pentathletes to throw a solid discus five times.  The winner was whoever threw the furthest distance.  According to USQA.org: "At some undocumented point in history, stakes in the ground were added to change the game from one of distance to one of accuracy."

Put simply, foregoing distance to ring a peg (or pin) means a solid discus simply cannot be used and, more importantly, points to the discus throw and the game of quoits having clearly different aims.  It is not unreasonable to say that they are clearly two different sports, albeit superficially connected by a throwing element.

Leaving the ancient Greeks, USQA.org then asserts the Romans role in spreading the game of quoits far and wide: "During the period of the Roman conquest of Europe, the Romans shod their warhorses with circular rings of iron weighing about 4 pounds apiece.  These "shoes" were not nailed to the horses' hooves but rather were strapped to them with leather thongs." 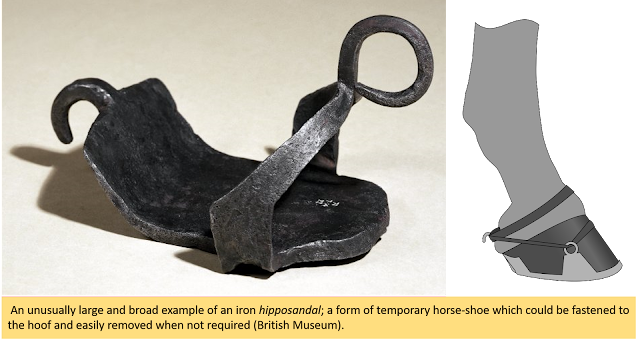 As far as is known the Romans did not shoe their horses with "rings of iron" but used the “hipposandal” (Latin: soleae ferreae) instead.  Surviving examples look like an oval-shaped cup of thick metal that enclosed and protected the hoof.  As USQA.org states, this early form of horseshoe was fastened to the hoof by leather laces tied through metallic rings and around a prominent hook (as shown above).  The hipposandal was clearly not a circular ring so this is another example of a non sequitur (Latin: "it does not follow") in USQA.org’s history.  It is equally doubtful that what the Romans did use weighed "4 pounds apiece".  Conveniently, however, this is the weight of a modern quoit as prescribed for the traditional American game - a coincidence surely?

Returning to the history: "The rings were a fair imitation of a Discus or Quoit, so the soldiers began tossing the worn-out shoes in their leisure time.  When horseshoes later developed into the open U-shape familiar now, the soldiers would either bend them into crude rings or just pitch them as they were.  Thus, Horseshoes became the economical substitute for soldiers and commoners who did not have access to the expensive, forged sets of Quoits."

Although it could be argued there is some resemblance between a hipposandal and a discus - flat metal discs that Roman soldiers might have thrown for distance - hipposandals were clearly not "a fair [or otherwise] imitation" of a ring-shaped quoit.  The familiar nailed, u-shaped, iron horseshoe first appeared in the archaeological record in Europe in about the 5th century AD when a horseshoe, complete with nails, was found in the tomb of the Frankish King Childeric I at Tournai, Belgium[4].  This was around the time of the waning and eventual collapse of Roman administration in Europe.  In these turbulent times it is unlikely that soldiers, Roman or otherwise, were bending iron horseshoes "into crude rings" to play quoits.

Regardless, "The Roman conquest brought Quoits to Britain, and by the 1300’s the game became a hugely popular pastime there, especially among English Noblemen.  British settlers eventually brought Quoits to America in the late 1600's, where it flourished throughout the Colonies."  Frustratingly there is little or no evidence for the game of quoits being brought to Britain during the period of Roman rule, or of the game being played subsequently.  That is until AD 1388 when there is some vague "historical evidence of attempts to ban Quoits from pubs and taverns due to its disreputable character"[5].  It is not until the 19th century that the game became increasingly popular and was documented in any detailed way.  The official rules, for example, first appeared in the April 1881 edition of The Field having been defined by a body formed from pubs in Northern England.  If true, then quite how the game was taken to the USA in the 17th century remains somewhat of a mystery, but not impossible.

It seems readily apparent that the game of quoits has a well-established yet unsubstantiated, almost mythical, history in popular culture.  To be fair to USQA.org, its published history has been singled out and heavily critiqued, but its authors are not alone in fuelling the game's mythical roots.  Clearly drawing on each other, many other, diverse websites perpetuate the same ideas.  Few challenge the game’s asserted Greek ancestry, many are happy to conflate the ancient discus with the modern quoit, and most blindly accept that the Romans spread the game across their Empire and, in time, much further afield.  Where doubts are expressed, those authors simply opt for a later unspecified mediaeval European origin.  Whatever the truth, the "ancient" history of quoits ought to be treated with caution, perhaps even as just a myth to be dispelled.

Posted by Tastes Of History at 12:01 No comments:

In an earlier post (Daily Meals in Tudor England) mention was made of "Collop Monday", the day before Shrove Tuesday, in connection with the origins of breakfast.  More recently we produced "Scotch Collops" for English Heritage's "Elizabethan Pageant" at Kenilworth Castle.  With little idea of what the term "collop" meant, some quick web-based research revealed a surprising answer.

Like Easter, Collop Monday is evidently another moveable date in the Christian calendar but regardless on what date it actually falls, it is always the Monday before Shrove Tuesday (pancake day in Britain).  Precisely when Collop Monday came into being is not clear but it was most likely established in the Mediaeval period. 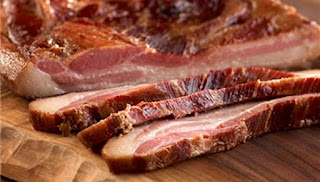 Also known as Shrove Monday, traditionally this was the last day to cook and eat meat before the prohibitions of Lent.  Without refrigeration, it is likely that the only meat available at that time of year would have been smoked or salted - usually bacon or ham.  In fact, in Tudor England the name collops referred specifically to thick slices of bacon.

It soon became the custom that the bacon would be fried and served with eggs, usually for breakfast, on Collop Monday.  In one way this could be considered the forerunner of today's full English Breakfast.  Nevertheless, the leftover bacon fat would be used the following day, Shrove Tuesday, to make pancakes.

The traditional Scottish dish known as "Scotch Collops" uses either mince or thin slices of either beef, lamb or venison.  The meat is combined with onion, salt, pepper and suet, then stewed, baked or roasted with optional flavourings according to the meat used.  Today Scotch Collops are often served garnished with thin toast and mashed potato.

Posted by Tastes Of History at 09:00 No comments: