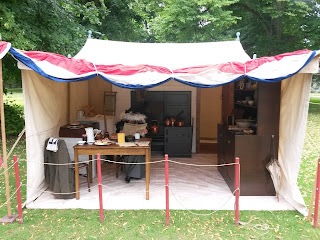 With this year marking the centenary of the end of the Great War, at Waddesdon Manor we recreated a taste of the Home Front in 1918.  Many of the visitors were surprised to discover that many of the things familiarly associated with World War 2 had been instituted just over two decades earlier.  The first German air raid on London, for example, took place on May 31st, 1915.  A further 50 attacks were made by Zeppelin airships on British cities until higher flying fighter aircraft and incendiary bullets brought these aerial bombers down to earth.

Women at War  On the eve of the war, there was serious domestic unrest in the UK particularly amongst the labour and suffrage movements, and a powerful revolt against imperial rule in Ireland.  At the outbreak of war, however, patriotic feeling spread throughout the whole country, with much of the population rapidly rallying behind the government.  Yet as the war ground on, the significant sacrifices made in the name of defeating the enemy slowly but irrevocably weakened many of the class barriers in Edwardian Britain.  It was a time of great change.

Variously throughout the war, serious shortages of able-bodied men ("manpower") led to women taking on many of the traditional male roles.  Indeed, the Great War is credited by some with drawing women into mainstream employment for the first time.  Prime Minister David Lloyd George was
clear about how important women were: 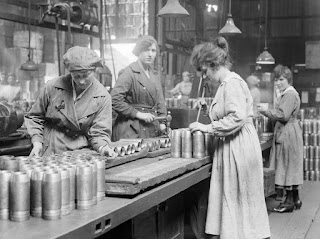 “It would have been utterly impossible for us to have waged a successful war had it not been for the skill and ardour, enthusiasm and industry which the women of this country have thrown into the war.”

The experience of individual women varied greatly, with much depending on locality, age, marital status and occupation.  Many women found work that directly helped the war effort in the munitions factories (as "munitionettes", pictured opposite).  Many more found employment opportunities in the Civil Service and in administrative work, which likewise released men for the front.  Eventually, women could join the armed forces in non-combatant roles, such as nursing and cooking.  By the end of the War some 80,000 women had joined the armed forces in auxiliary roles.  The khaki clad enlistees of The Women's Army Auxiliary Corps (WAAC) could find themselves driving trucks and mending engines, cooking for frontline troops or performing the vital administration and supply work.  By the end of the war there were some 50,000 women serving in the renamed Queen Mary's Army Auxiliary Corps in the war zones of France, Belgium, Italy and Greece. 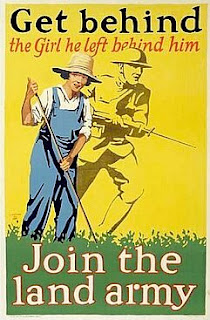 Women’s Land Army Born  The British government wanted women to get more involved in the production of food and do their part to support the war effort.  One goal was to attract middle-class women to act as models for patriotic engagement in non-traditional duties.  Many farmers were resistant, so the Board of Agriculture set about encouraging farmers to accept women’s help on the farms.  In March 1917, the Women's Land Army was born; not in World War Two as popularly assumed.  By the end of that year there were over 250,000 women working as farm labourers, with 23,000 in the Land Army itself, performing chores such as milking cows and picking fruit.

This development was not without controversy, however.  The uniform of the Women's Land Army of male overalls and trousers sparked debate on the propriety of cross-dressing.  However odd this may seem today, the British government, desperate not to upset the social mores of the time, employed rhetoric to explicitly feminise the new roles with some success.  Pre-war, for example, it was generally accepted that secretaries were men.  Post-war, and in more recent times, secretarial roles are thought, rightly or wrongly, the preserve of women. 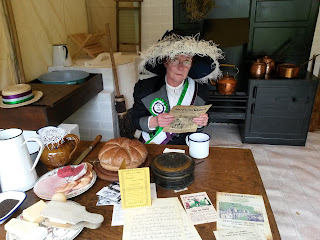 Food and Rationing  In line with its wartime "business as usual" policy, the British government was initially reluctant to try to control the food markets.  It resisted efforts to introduce minimum prices in cereal production, though relenting on the control of essential imports such as sugar, meat and grains.  When changes were introduced, however, they had limited effect.  In 1916, it became illegal to consume more than two courses while lunching in a public eating place or more than three for dinner; fines were introduced for members of the public found feeding the pigeons or stray animals.

In January 1917, in yet another foretaste of World War Two, Germany’s unrestricted submarine warfare programme began to sink ships bringing food to Britain.  Aimed at starving the country into surrender, Britain responded by introducing voluntary rationing the following month.  Bread was subsidised from September 1917, with compulsory rationing introduced in stages between December 1917 and February 1918, as Britain's stores of wheat dropped to just six weeks’ supply.  To assist with rationing, ration books were introduced on July 15th, 1918 for butter, margarine, lard, meat, and sugar. 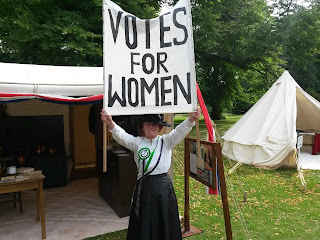 Women's Suffrage  In the spirit of patriotism, the suffragists of the National Union of Women's Suffrage Societies (NUWSS) and the militant suffragette movement, epitomised by Emmeline Pankhurst’s Women’s Social and Political Union (WSPU), both suspended their
“Votes for Women” campaigns for the duration of the war.  Today we are probably more familiar with the suffragettes as their campaign of "Deeds not Words" epitomises the power of propaganda and the manipulation of the media to maximise the "oxygen of publicity" such groups need to survive and prosper.  Yet the suffragettes were on the verge of becoming a radicalised, extremist terrorist group in 1914.  While it is true that no person was hurt by the WSPU's arson and bombing attacks, one wonders if the war had not intervened, just how long it would have been before someone was killed by their actions.

Today it is still much debated what impact the activities of the suffrage movements, especially the suffragettes, and the Great War had on women's emancipation.  In the aftermath of the war, millions of soldiers returning home were still not entitled to vote, which posed a dilemma for politicians.  How could they be seen to withhold the vote from the very men who had just fought to preserve the British democratic political system.  The Representation of the People Act 1918 attempted to solve the problem.  When, on February 6th, Royal Assent to the Act gave the right to vote to all adult males over 21 years old who were resident householders, it also gave the vote to women over 30 who met minimum property qualifications.  Until recently, the enfranchisement of this latter group was accepted as recognition of the contribution made by women defence workers.  It is more likely, however, that granting limited, age-restricted women’s suffrage was a by-product of giving the vote to millions of returning male soldiers rather than a reward for women’s participation in war work, or indeed the suffrage campaigns.  Even so, it would take a further ten years before women in Britain finally achieved suffrage on the same terms as men.

1918 was a significant year.  In the post-war “land fit for heroes” many of the social barriers that had pervaded Victorian and Edwardian Britain had been irrevocably broken.  In 1918 women over the age of 30 were given the right to vote.  A year later the Sex Disqualification (Removal) Act made it illegal to exclude women from jobs because of their sex.  Yet in the very same year, the Restoration of Pre-War Practices, meant that men should be given priority in employment.  Many women found themselves pushed back into the home, back into caring roles for husbands many bearing the physical and mental scars from the fighting.  The clock could not be turned back entirely, however.  Women had found new independence and had shown themselves and the rest of society that they could do jobs that before the Great War would have been unthinkable.  In 1918 women's emancipation had taken its first steps on the long road to today.
Posted by Tastes Of History at 15:24 1 comment: