Travels with my Freed Bear: Kourion 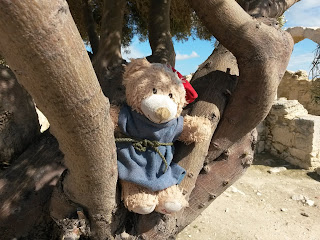 When schools in the UK take their half-term break in February, we have been lucky, for the last few years, to visit Cyprus.  Although a working trip on behalf of Sir Teachalot delivering history workshops for schools on the island, there is usually a bit of time to explore.  On one such excursion we headed to the Kourion Archaeological Site.  What follows is a brief guide to some of the site's best preserved bits.

Kourion (Greek: Κούριον or Latin: Curium) was an important ancient city-state on the southwestern coast of Cyprus.  The acropolis of Kourion, located 1.3 km southwest of Episkopi and 13 km west of Limassol, is positioned atop a limestone promontory nearly one hundred metres high along the coast of Episkopi Bay.  The city-state that arose overlooked and controlled the fertile valley of the river Kouris.  Archaeological evidence suggests that its inhabitants believed they were descendents of Argean immigrants and that Kourion was associated with the legend of Argos in the Greek Peloponnese.  The once-flourishing kingdom was eventually destroyed in a severe earthquake in AD 365.

For those wishing to visit, the Kourion Archaeological Site lies within the British Overseas Territory of Akrotiri and Dhekelia and is managed by the Cyprus Department of Antiquity.  Kourion is part of the UNESCO World Heritage Site of Paphos.  At the time of writing, entrance costs from €4.50 per person.

The Theatre  The site’s centrepiece is the magnificent Greco-Roman theatre built in the 2nd century BC and extended in the 2nd century AD.  Excavated by the University Museum Expedition of the University of Pennsylvania between 1935 and 1950, the theatre has been extensively restored.  It is still used for open-air musical and theatrical performances - mainly during the summer months - thus connecting modern audiences with their ancient forebears. 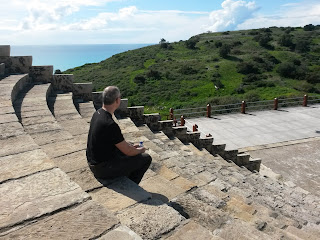 The theatre was initially constructed on a smaller scale in the late-second century BC on the northern slope of the defile ascending from the Amathus Gate.  The slope of the hill was thus used to partially support the weight of the seating in the cavea (Latin for "enclosure").  This architectural arrangement is typical of Hellenistic theatres throughout the Eastern Mediterranean with a circular orchestra (Greek: orkhestra)[1] and a cavea exceeding 180 degrees.

The theatre was repaired in the late-first century BC, likely following the earthquake of 15 BC.  The theatre's skene, or "scene building"[2], (Latin: scenae frons) was seemingly reconstructed in AD 64/65 by Quintus Iulius Cordus, the proconsul, and it was likely at this time the ends of the cavea were removed, reducing it to a Roman plan of 180 degrees.  The orchestra was likewise shortened to a semi-circular form.  The theatre received an extensive renovation and enlargement during Emperor Trajan's reign between ca. AD 98 - 111, bringing the theatre to its present size and seating arrangement.  The scene building was rebuilt to the height of the cavea.  Now only the foundations are preserved, but this structure would have originally obscured the view of the Mediterranean to the south.  The enlarged cavea could have accommodated an audience of as many as 3,500 people.

Between AD 214 and 217, the theatre was modified to accommodate gladiatorial games and venationes, the hunting and killing of wild animals (Latin: venatio, "hunting", plural venationes). It was restored to its original form as a theatre post-AD 250.  The theatre fell out of use in the later-fourth century AD, likely the result of successive seismic events with the earthquake of AD 365/70 perhaps resulting in its eventual abandonment.

House of Eustolios  Just to the east of the theatre are the remains of a prominent building, the "House of Eustolios".  Originally a private villa it was converted into a public recreation centre during the Early Christian period. 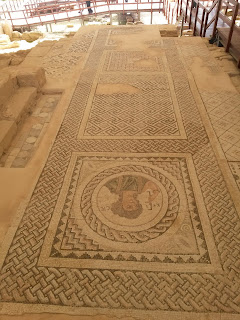 Whilst the villa was modest in size, it was well equipped and richly adorned.  Its remains consist of four panels of beautiful, 5th century mosaic floors in the central room (pictured left), and a bathing complex that is located on a higher level, accessed by steps, north of the building.  A roof structure allows visitors to enjoy the site all year round, and explore its remains.

The baths themselves originally opened off the central room to the north and east, where there were cold baths (frigidarium). Before each is a shallow foot-bath; while on the west, the remains of the hypocausts - which heated the warm room (tepidarium), and the hot room (caldarium) - can be seen. In the latter, the built-in basins for hot baths have survived, as have the furnaces, where hot air was carried through the hypocausts, travelling up through specially-cut flues, through the walls, and beneath the terracotta tiles of the floor.

The "House of the Gladiators" is located south and east of the "House of Achilles" and dates to the late-3rd century AD.  It has been interpreted as an elite-private residence, or perhaps more probably as a public palaestra[3].  The latter interpretation is suggested by the absence of many rooms appropriate for living spaces and that the structure was entered from the east through the attached bath complex.

The main wing of the structure is arranged around a central peristyle courtyard.  The northern and eastern portico of the atrium contains two panels depicting gladiators in combat, the only such mosaics in Cyprus.  The structure was extensively damaged in the earthquakes of the late-4th century, but the east rooms seem to have been used until the mid-7th century.


The Forum, the Nymphaeum and the Forum Baths  The forum of Kourion, as it appears today, was constructed in the late second or early third centuries.  As the centre of public life, the forum consisted of a central pavement with colonnaded porticoes set along its eastern, northern and western sides.  The eastern portico measured 65 m in length and 4.5 m wide, with a colonnade facing the courtyard, and a wall forming frontage of shops to the west.  The northern portico provided access to a monumental nymphaeum and a bath complex, or thermae, constructed around the nymphaeum to the North.  The western portico was renovated in the early fifth century to provide an entrance to the episcopal precinct, located immediately to the West.

The nymphaeum, was developed in four successive phases from the early first century AD to the mid seventh century, and was among the largest nymphaea in the Roman Mediterranean in the second and third centuries. In its earliest phase the nymphaeum consisted of a rectangular room with a tri-apsidal fountain set in its northern wall flowing into a rectangular basin along the length of the same wall. After an earthquake in CE 77, the nymphaeum was rebuilt between 98 and 117. The nymphaeum was internally dived by a courtyard with a room to the south containing an apsidal fountain and rectangular basins. In this phase, the nymphaeum measured 45 m long and 15 m wide.  After its destruction in the earthquakes of the late fourth century, the nymphaeum was rebuilt as a three-aisled basilica with apses along the southern wall. This structure was used as a temporary church between 370 and 410 during the construction of the ecclesiastical precinct to the west. It was abandoned in the mid seventh century. 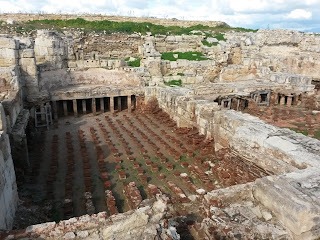 Pictured left are the numerous pilae stacks of square tiles that once supported the suspended floor of the hypocaust, the underfloor heating system common in Roman-era bathhouses.

The Sanctuary of Apollo Hylates  About 1½ km West of Kourion's acropolis is the Sanctuary of Apollo Hylates.  Well worth a visit, the earliest archaeological evidence for this Pan-Cyprian sanctuary are from votive deposits dated to the late eighth century BC.  These were discovered in the southern court and at the archaic altar, the earliest structure dating to the late eighth or early seventh century AD.  These early offerings were dedicated to “the god” rather than to Apollo who was not associated with the sanctuary until the mid-third century BC. 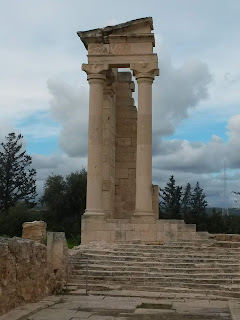 A structure of the late-fourth century BC, located East of the later sacred way, and South of the altar served as the residence of the priests of Apollo and the temple treasury.  This building was successively renovated in the first, third and fourth centuries AD.  The present form of the sanctuary dates to the first century AD and to its restoration in the early second century, during the reign of Emperor Trajan, after the earthquake of AD 76/77.

At the end of the first century BC or early first century AD the sacred street was laid out, and the palaestra, temple, structure north of the Paphian gate and the circular monument constructed.  The Augustan temple is 13.5 m long and 8.35 m wide with a tetrastyle (four pillared) portico beyond which was the  pronaos, the inner area situated between the colonnade or walls and the entrance to the cella, or shrine.

Under Trajan and the Proconsul Quintus Laberius Justus Cocceius Lepidus the sanctuary underwent restoration and expansion.  The southern portico, southern buildings, which likely functioned as dormitories for devotees and the bathhouse were built under this restoration.  The temple was subsequently abandoned after a period of decline in the late fourth century AD, after it was sustained significant damage in yet another earthquake.

1.  The Greek orkhestra means "a space where a chorus of dancers performs," from orkheisthai, "to dance."
2.  The “scene-building”, or skene, in ancient Greek theatres was originally a hut behind the playing area used for the changing of masks and costumes.  Eventually it became the background in front of which the drama was enacted.  The modern English words "scene" and "scenary" derive from skene.
3.  A palaestra (Greek: παλαίστρα) was the site of ancient Greek wrestling schools.  Events that did not require a lot of space, such as boxing and wrestling, were practised there.  The palaestra functioned both independently and as a part of public gymnasia; a palaestra could exist without a gymnasium, but no gymnasium could exist without a palaestra.