Sometimes when you are watching a television programme or film, the simplest thing can ruin its enjoyment.  For example, an Army officer walks into a room and a soldier salutes.  All well and good - the soldier is paying the appropriate compliment - except neither man is wearing their regimental headdress.  So what?  Put simply, no member of the British Armed Forces past or present would do such a thing.  Unlike some other countries, in the UK, Armed Forces personnel only salute when wearing regimental headdress.

Such a silly mistake, but now a veteran’s professional pride has been irked, and should this viewer take the show’s (or film’s) claims of accuracy seriously?  With their integrity questionable, what other mistakes or historical liberties have the producers taken that, lying outside one’s personal expertise, go unchallenged?

Before proceeding, admittedly the example given did not really affect the storyline, and probably went unnoticed by most viewers.  Yet it is such a simple, avoidable mistake that, in this era of “fake news”, should we allow these little errors to seep into the public consciousness unremarked?  As fellow historians, teachers and re-enactors all know, we spend considerable time and effort undoing the popular, persistent misconceptions permeated by the media’s output.

So, what is a “salute”, where does the idea of saluting originate and what are the (British) rules?

Paying Compliments  Salutes are primarily associated with armed forces, but other organisations and civilians also use them.  When serving British Armed Forces personnel salute an officer, they are actually acknowledging Her Majesty the Queen as Head of State and saluting the rank the officer holds (i.e. the Queen's commission) rather than the individual themselves.  When an officer returns a salute, it is done so on behalf of the Queen.  For other organisations, just as in the military, a salute is a gesture or other action used to display respect.

Roman Origins  Like so many things, the military salute is often thought to originate with the Romans.  The theory goes that, in the Roman Republic when “assassinations were common”, citizens were required to approach public officials with their right hand raised to show that they did not conceal a weapon.  Whether assassinations were commonplace is somewhat contentious, and even if true, what would prevent a citizen with murderous intent simply raising their right hand while closing on and stabbing their victim with a weapon held in the other?  In any case, there is no evidence that Roman soldiers raised their hand as a formal military greeting.  So, forget the infamous straight arm salute appropriated by the Nazis, its antithesis the Hollywood chest thump, or the fanciful grasping of forearms.

There are many Roman-era depictions of handshakes, however.  Such a greeting would certainly preclude either party holding a weapon in the proffered hand, but even so, it is virtually impossible to prove that any Roman hand gesture continued through fifteen centuries and led to the modern military salute.

Knightly Greetings  A more common theory is that the modern military salute originated with knights and men-at-arms raising the visors of their helmets before greeting their lord or comrades.  Such a gesture would have made a person recognisable (and also vulnerable) while at the same time demonstrating that the right hand (i.e. the sword hand) did not carry a weapon.  Although both might be signs of trust and good intention, this explanation is also regarded with scepticism.

Although compelling (and romantic), there is actually little evidence to support the visor theory as the direct origin of the modern military salute.  For one thing, the majority of helmets worn in battles, especially of the 16th and 17th centuries, were types not fitted with visors. Moreover, helmets became rare on European battlefields after about AD 1700. 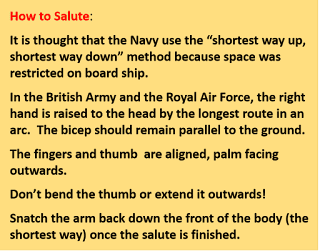 Tipping the Hat  Be that as it may, military records from the 17th century indicate that, in England at least, “the formal act of saluting was to be by removal of headdress” whereby privates and non-commissioned officers greeted officers, and junior officers did the same to their seniors.  By the middle of the 18th century, however, The Coldstream Guards[1] appear to have amended this procedure.  An order book from 1745 states: "The men are ordered not to pull off their hats when they pass an officer, or to speak to them, but only to clap up their hands to their hats and bow as they pass.”  It seems that, has headdress became more elaborate or cumbersome it was more difficult to simply remove their hats, and there seems to be some concern with excessive wear to headgear.

Quickly adopted by other regiments, the British Army adopted a salute with the palm facing outwards, which is also used by the Royal Air Force today.  The Royal Navy, however, adopted a version with the palm facing downwards.  It is said that, with sailors climbing a ship’s rigging and getting their hands covered in tar, it was deemed disrespectful for officers to see unwashed hands.  It is thought, therefore, that the naval salute avoided showing dirty palms.

The practice may have spread from England to America (via the War of Independence) and Continental Europe (through the Napoleonic Wars).  The Royal Navy's form of salute is thought to have influenced the US military, whose version also involves the palm facing downwards.

Did you know?  One suspects most veterans and serving members of Her Majesty’s Armed Forces may cringe (or shout at the TV) every time they witness an actor or extra saluting while not wearing their headdress.  We all know it is pedantry, but if a movie or TV programme, especially a documentary, wants to be taken seriously for its historical accuracy, as many producers and directors like to claim, then getting the basics right is fundamental.

There are defined sets of rules concerning military saluting.  Rather usefully www.forces.net provide all the necessary pointers for anyone wishing to deliver a believable portrayal of a member of the British Armed Forces.  So, directors, producers, researchers, writers, actors and extras please take note:

And finally  A general ignorance has led to several misconceptions about the origin of the salute that are, sadly, devoid of any historical base.  It is most likely that the military salute began as a gesture of respect and politeness parallel to the civilian custom of raising or tipping one’s hat.  Possibly it chimed with the warrior’s custom of showing an unarmed right hand, a sensible precaution we might agree, but one we cannot be certain of as true.


[1]  The Coldstream Guards were formed in the English Civil War, being on active service from August 13th, 1650.  As the oldest continuously serving regiment in the British Army, Guardsmen have answered the call of duty in almost every conflict with British involvement, earning a well-deserved reputation for loyalty and courage.
[2]  On combat operations, the saluting of officers may be dispensed with even if both parties are wearing headdress or more typically helmets.  Commanders are valuable assets, so unless you wish to draw the enemy’s undesirable attention and take casualties, do not salute officers.  Compliments can still be paid but without making things so obvious as to who is in charge.
Posted by Tastes Of History at 11:57