In an effort to continually improve our knowledge we came across “History…The Interesting Bits!”, a blog by Sharon Bennett Connolly. In October 2019, the blog posted a piece by guest writer James Wright, a buildings archaeologist with Triskele Heritage. In it, James busted several myths surrounding the construction and use of Mediæval buildings. For those interested, the full post can be found here: https://historytheinterestingbits.com/2019/10/09/guest-post-busting-mediaeval-building-myths-part-one/ but what drew our eye was the section on spiral staircases.

Guilty of believing that spiral staircases always twist clockwise, it is time to dispel that particular myth. So, here is James’ account of one of the ten myths associated with mediaeval buildings, and the (often more interesting) realities hiding behind them. 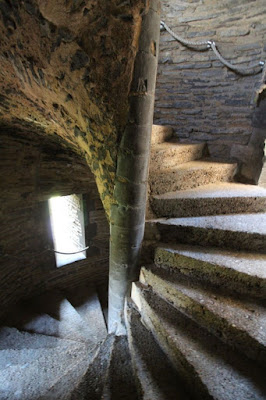 “During my [James’] visits to mediaeval buildings, the information relayed on websites, leaflets and guidebooks or by property owners, custodians and stewards is not always wholly precise. I want to use this blog to gently bust a few of the more common myths. There is rarely any malicious intent in such stories - they are usually the result of the misidentification of a structure by an early antiquarian, amateur or even professional historian. If something has been repeated enough times or put into print it becomes “real”. Once it becomes “received wisdom” the myth is widely taken as factual and repeated often.

Go and visit any castle in the land and you will inevitably find a guidebook, audio-tour, interpretation panel or tour guide stating that all spiral staircases twist clockwise to provide a swordsman’s advantage for the right-handed defenders, who were able to easily wield their weapons, whilst attackers would be at a disadvantage. I’ve spotted this being presented to visitors recently at both Arundel, Sussex and Colchester, Essex.

Some castle gatehouses (for example, Tonbridge, Kent) feature two staircase turrets, one clockwise and one anti-clockwise. They seem to relate to a similar pattern of access in monastery and cathedral towers (such as St Alphage Tower, London) which may be “up” and “down” routes to avoid collisions and jams. Many castles, such as Richmond, North Yorkshire, even feature straight stair passages.

Finally, sieges rarely ended with fighting in the interiors of castles, let alone on the staircases - if the enemy was on your stair, the battle was probably already lost!”