In the summer of 2015 archaeologists from the University of Edinburgh attempted to recreate a style of Stone Age cooking based on their discovery of a 9,000 year old barbecue pit.

Over the last three years excavations have been ongoing at Prastio Mesorotsos situated in the Diarizos Valley outside of Paphos on the Mediterranean island of Cyprus. The site, which has been almost continuously occupied from the Neolithic era to the present, offers a wealth of insights in to the practices of our ancestors but it is on ancient culinary techniques that we will focus. 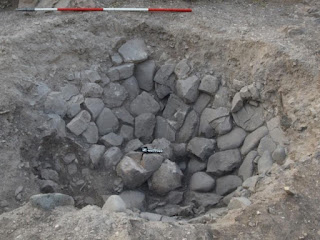 A stone-lined, ash-covered pit measuring about 2.5 metres (8 feet) across and 1 metre (3 feet) deep was discovered, but it was only this summer that the archaeologists could say with some certainty they were looking at an ancient oven. Its sheer size, however, was troubling. For an oven of this type the newly discovered pit was thought to be at the theoretical maximum since to keep such an oven hot enough would require a significant amount of energy.

With no one sure whether cooking would have been even feasible, but in the spirit of the Stone Age (and experimental archaeology), it was decided to recreate a prehistoric pit feast. The aim was to feed 200 people with pig and goat, slow-roasted underground and thus test the culinary methods of Neolithic cooks.

A replica pit was duly dug, although modern tools were used as it was felt that getting to grips with stone tools would have taken too long. Searching for the other necessary elements to cook the meal stuck to ancient methods, however. The archaeologists scoured local riverbeds for big igneous stones that would retain and radiate heat, and they hauled their choice rocks uphill in sacks or with a yoke made from a stick and baskets - a time-consuming and painstaking task.

Local clay was collected in buckets to hold the 400 stones in place around the outside of the oven. The team made its own charcoals out of lemon and carob wood. They also tanned 10 goat skins that would be used as parcels for the meat and crafted meat hooks out of sapling wood.

Bones found at the site provided compelling evidence that the prehistoric inhabitants ate pigs, goats and deer. Thus it was decided to source a 70 kg (150 lbs) pig (skin on, head detached) and a 38 kg (80 lbs) goat from a local butcher. Deer, now extinct in Cyprus, was left off the menu.

Days before the feast, the team let a fire burn in the stone-lined pit for 24 hours so that the ground, possibly still cold and damp from a wet winter, would not suck the heat out of their oven. The charcoal was lit the day before the feast and were covered with another layer of stones to prevent the meat directly touching the heat source. When the oven was ready, the pig, stuffed with bulgur wheat, wild fennel stems, anise and bay leaves before getting sewn up tightly with hemp twine and packed into a blanket, was placed on the hot stones. Similarly the goat meat, which had been chopped, spiced with herbs like wild oregano and divided between two parcels, was placed in the pit.

More herbs were packed on top of the meat, before the oven was sealed with stones and a clay-and-mud mixture. Another fire was then lit on top of the closed pit so that heat would not escape overnight.  Slow roasting ensured that the meat was tender and infused with the tastes of lemon wood, carob and bay leaf. 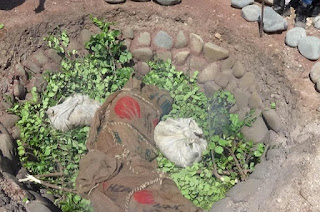 Much was learned through the experiment. Firstly it was proved that a pit of the size found could indeed cook sufficient food to satisfy 200 guests and still have leftovers that could have sustained them for even longer. It is thought that fat rendered from the pig may have been used to preserve leftover meat. While the fat will turn rancid, the meat will not and can be stored for up to a year by this method.

While preparing the pit roast, the team also inadvertently recreated some of the more elusive, sensory elements of such a prehistoric feast. The spectacle of the three-day-long fire required to heat the oven would not have been a regular experience and thus may well have had a special significance for the local community.  The light and heat generated throughout the night was probably as much an important part of the feast as the gathering of people to enjoy the result. It is hard not to imagine storytelling, dancing and laughter round the communal fire - much as many of us often enjoy today.
Posted by Tastes Of History at 18:03 No comments: