Connoisseurs of Roman cuisine may be familiar with the recipes of "Apicius".  Indeed, "Apicius" was the inspiration for the Roman recipes in Tastes Of History's recent post "Fast Food or Dinner Party", but just who was he?  Did he really write the first cookbook?  And was he really a skilled Roman cook, the equivalent of today’s celebrity chef?  Probably not, and here’s why. 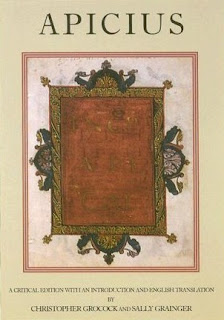 The collaborative work of Dr Christopher Crocock and Sally Grainger (two good friends of ours) provides probably the strongest argument for placing Apicius in context.  From each's experience, they have employed two mutually supportive approaches.  Firstly, to reveal the true Apicius it would be most helpful to fully understand the Latin text, not just to decipher the author's words but to grasp the underlying objective.  This was where Chris’ precise translation of the original manuscript proved invaluable.  Secondly, armed with the translated text in a more user-friendly form, Sally’s skill as a chef brought the ancient recipes to life.  Experimental archaeology of this sort reveals much about the original purpose of the surviving cookbook.  Working together in this way has led both Chris and Sally to argue that the recipes in "Apicius" were read and used by slave cooks rather than written for, or by, some Roman gourmet.

There are, however, ancient sources identifying a bon viveur called Marcus Gavius Apicius (AD 14-37), who lived in the reign of Emperor Tiberius.  This Apicius was seemingly notorious for being "born to enjoy every extravagant luxury that could be contrived" - at least according to Pliny (Natural History, 9. 30).  Moreover, the satirist, Seneca, tells us that: "Having spent a fortune of 100 million sestertii on his kitchen, spent all the gifts he had received from the Imperial court, and thus swallowed up his income in lavish hospitality, Apicius found that he had only 10 million sestertii left.  Afraid of dying in relative poverty, he poisoned himself."

Evidently Marcus Gavius Apicius was no cook - and nor should he have been. Cooks in the Roman world were slaves skilled in the art of producing the fine dishes consumed by the wealthy elite - their masters/owners. To the Roman mind it would be completely inappropriate for the producer and consumer to be one and the same. Thus there are good reasons to suspect that Marcus Gavius Apicius was not the author of the eponymous cookbook.

Moreover, the translation and analysis of the original text by Chris Grocock makes it abundantly clear that the Latin used is vulgar in the literal sense: of the street and the work-place. As a member of the educated Roman elite, Marcus Gavius Apicius should have been ashamed of the style and grammar used. Furthermore, literary works on food focused very much on the origins and qualities of the ingredients rather than preparation of the dish. The “Apicius” texts appear unconcerned with the source, characteristics or indeed any general information on the ingredients used, something an educated Roman, especially a gourmet, would find wholly unsatisfactory.

The absence of an author’s voice is also telling. Had the work been by a single hand, one would expect to “hear” a consistent style, but this is absent. Similarly, had the work been a collection of the writings of different cooks, then one might expect to hear their individual voices. Yet the cooks’ voices are missing, as is that of an obvious compiler. It is most likely, therefore, that the series of books grew from an original collection into its final form having been assembled by an indifferent scribe, with all the inconsistencies and copying errors, rather than a particular compiler. It seems most likely that Apicius was not a Roman author, but rather a convenient name by which we can refer to a surviving practical cookbook for use by kitchen slaves.

Endnote:  The personal pronoun "he" is used throughout simply because "Apicius" is the masculine form of a Roman name.