Mother's Day: Not as sold  This Sunday (March 11th) saw that one chance each year to tell your mother how much she means to you (hopefully you don't need just one day per year to do that).  But why does the date change every year?  In the UK, Mother's Day falls on the fourth Sunday in Lent, which begins on Ash Wednesday, the day after Pancake Day - itself a movable date.  But Mother's Day may not be all that you think, especially given the overwhelming commercial hype that today obscures its origins.

Celebrations of mothers and motherhood can be traced back to the ancient Greeks and Romans, who held festivals in honour of the mother goddesses Rhea and Cybele.  But the clearest modern precedent for Mother's Day is the early Christian festival known as "Mothering Sunday".  Once a major tradition in the UK and parts of Europe, this celebration fell on the fourth Sunday in Lent and was originally seen as a time when the faithful would return to their "mother church" - the main church or cathedral nearest their home - for a special service.  Over time the Mothering Sunday tradition shifted into a more secular holiday, and children would present their mothers with flowers and other tokens of appreciation.  This custom eventually faded in popularity before merging with the American Mother's Day in the 1930s and 1940s.
In the Beginning  Cybele[1] was an originally Anatolian mother goddess.  She has a possible early Neolithic precursor at Çatalhöyük, in modern day Turkey, where the statue of a pregnant, seated goddess was found in a granary.  Cybele is Phrygia's only known goddess and was probably its state deity.  Her Phrygian cult was adopted and adapted by Greek colonists of Asia Minor and spread from there to mainland Greece and its more distant western colonies from around the 6th century BC.


In Greece, Cybele met with a mixed reception.  She was partially assimilated to aspects of the Earth-goddess Gaia, her Minoan equivalent Rhea, and the Harvest-Mother goddess Demeter.  Some city-states, notably Athens, evoked her as a protector, but her most celebrated Greek rites and processions show her as an essentially foreign, exotic mystery-goddess who arrives in a lion-drawn chariot to the accompaniment of wild music, wine, and a disorderly, ecstatic following.  Uniquely in Greek religion, she had a transgender or eunuch mendicant priesthood.  Many of her Greek cults included rites to a divine Phrygian castrate shepherd-consort Attis, who was probably a Greek invention.  In Greece, Cybele is associated with mountains, town and city walls, fertile nature, and wild animals, especially lions.


What did the Romans ever do?  In Rome, Cybele was known as Magna Mater ("Great Mother").  The Roman State adopted and developed a form of her cult after the Sibylline oracle recommended her conscription as a key religious component in Rome's second war against Carthage.  Roman mythographers re-invented her as a Trojan goddess, and thus an ancestral goddess of the Roman people by way of the Trojan prince, Aeneas.  With Rome's eventual hegemony over the Mediterranean world, Romanised forms of Cybele's cults spread throughout the Roman Empire.  The meaning and morality of her cults and priesthoods were topics of debate and dispute in Greek and Roman literature and remain so today.


The Romans also celebrated the Hilaria on March 25th, the eighth day before the Kalends of April, in honour of Cybele, the mother of the gods.  The day of celebration was the first after the vernal equinox, or the first day of the year which was longer than the night.  The winter with its gloom had died, and the first day of a better season was spent in rejoicing.  The manner of its celebration during the time of the Republic is unknown, except that Valerius Maximus mentions games in honour of the mother of the gods.  During the Imperial period, Herodian writes that, among other things, there was a solemn procession, in which the statue of the goddess was carried.  Before this statue were carried the costliest works of art belonging either to wealthy Romans or to the emperors themselves.  All kinds of games and amusements were allowed on the day; masquerades being the most prominent among them, and everyone might, in disguise, imitate whomsoever they liked.


Christian tradition  In the centuries that followed, Rome’s influence as the head of the Catholic church led, in Britain at least, to celebrating Mothering Sunday on the fourth Sunday of the Christian period of Lent, the 40 day period of fasting leading up to Easter.  It was intended for people to visit their main cathedral, or "mother church", rather than worship in their local parish.  Later domestic servants were given the day off to return to their home town or village and worship with their families.  But making the journey naturally led to family reunions that, over time, began to have greater significance.  This in turn has led to modern Britain's version of Mother's Day.
Much like “Trick or Treat” Halloween, the commercialised version that persists today is largely courtesy of the Americans.  Now known mostly for the giving of brunches of flowers, gifts, cards, and for general outpourings of love and appreciation, this was not what was first intended, however.


Tradition hijacked  In the 1850s, Ann Reeves Jarvis organised women to hold Mother's Day work clubs aimed at improving sanitary conditions in West Virginia, and to lower infant mortality by fighting disease and curbing milk contamination.  Between 1861 and 1865, the groups also tended wounded soldiers from both sides during the U.S. Civil War.  In the post war years Jarvis and other women organised Mother's Friendship Day picnics and other events as pacifist strategies to unite former Union and Confederate foes.


When Ann Reeves Jarvis died in 1905, her daughter Anna Jarvis was inspired to organise the first Mother's Day observances.  On May 10th, 1908 families gathered at events in Jarvis' hometown of Grafton, West Virginia - at a church now renamed the International Mother's Day Shrine.  They also gathered in Philadelphia, where Jarvis lived at the time, and in several other US cities.  The purpose was not to celebrate "all mothers", but rather the best mother each son or daughter had ever known - their own.  Indeed, this intention may explain why Jarvis stressed the singular "Mother's Day," rather than the plural "Mothers' Day”.


A new holiday  Largely through Jarvis's efforts, Mother's Day came to be observed in a growing number of cities and states until, in 1914, U.S. President Woodrow Wilson formally set aside the second Sunday in May as an official holiday.  Yet Anna Jarvis's idea of an intimate Mother's Day quickly became a commercial gold mine centred on the buying and giving of flowers, sweets, and greeting cards.  This development so deeply disturbed Jarvis that she set about dedicating herself, and her sizable inheritance, to returning Mother's Day to its more reverent roots. 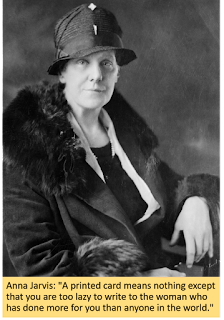 She incorporated herself as the Mother's Day International Association and tried to retain some control of the holiday.  She organised boycotts, threatened lawsuits, and even attacked First Lady Eleanor Roosevelt for using Mother's Day to raise funds for charities.  In 1923, for example, she crashed a convention of confectioners in Philadelphia.  A similar protest followed two years later.  The American War Mothers had been using Mother's Day for fund-raising, selling carnations every year.  Jarvis resented that, so she crashed their 1925 convention in Philadelphia, and was duly arrested for disturbing the peace.


Jarvis's fervent attempts to reform Mother's Day continued until at least the early 1940s.  In a state of dementia, a penniless Jarvis finally died, aged 84, in Philadelphia's Marshall Square Sanatorium in 1948.


The holiday Anna Jarvis launched has spread around much of the world.  It is celebrated with varying enthusiasm, in numerous ways, and on different days - though rarely on the second Sunday in May.  One hundred years on and commercialism still overshadows the ancient spiritual beginnings, and the more recent reverent roots, of Mother's Day.  Perhaps Anna Jarvis had a point.