Dishes for a Pirate Banquet

There are many recipes from Georgian Britain that could be adapted to recreate your very own pirate banquet. We have selected just a few to whet your appetite. So, eat up m'hearties and try some Tastes Of History from the Golden Age of Piracy...Yo Ho!
No meal aboard ship would be complete without “hard-tack” or “biscuits”, or as they were more often called, “ship’s bread”.  As the name suggests, these were baked iron-hard to survive long voyages.  Seamen would not try to bite these biscuits - you risk breaking a tooth - but would soak them in their water, ale or broth until they were soft enough to break off a corner.  Ship's Bread was often flavoured by being dipped in bacon or pork fat and lightly fried. 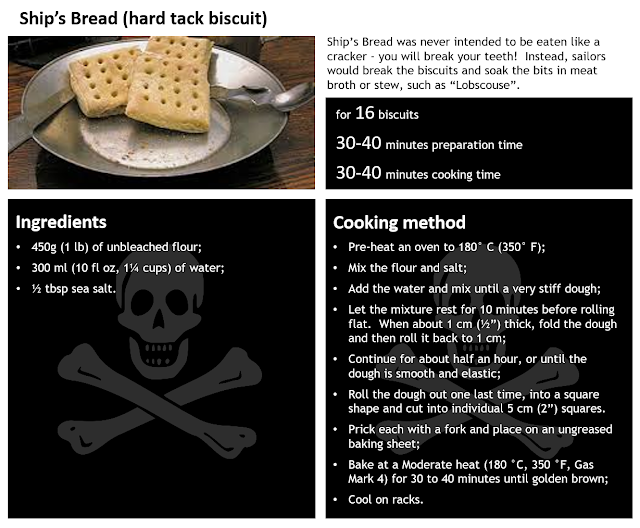 A great way to serve Ship's Bread is with something like "Lobscouse", a traditional mariner's stew: 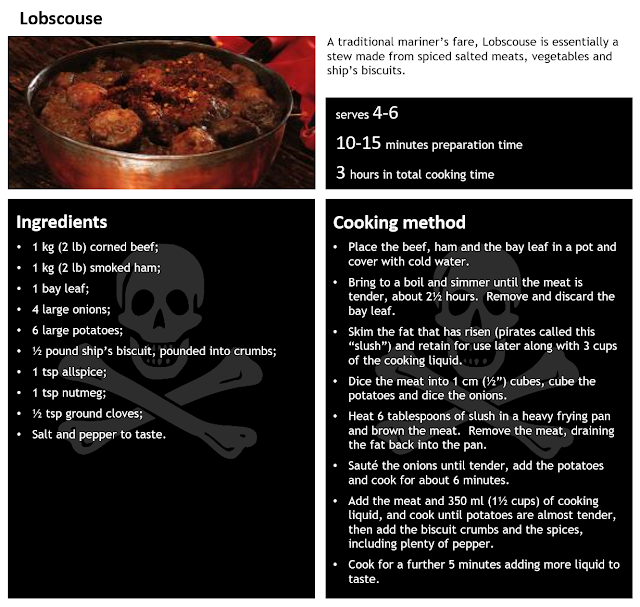 Properly cooked turtle-meat is mentioned in many pirate memoirs as being the finest food available; many liken it to the finest beef.  The calipash and calipee, the greenish and yellowish gelatinous substances from the upper and lower lining, respectively, of the turtle shell is still highly sought-after to make delicious soup.  Bearing in mind that stocks of sea-turtle may be running low on the shelves in your local supermarket, here instead is a "mock" turtle soup recipe: 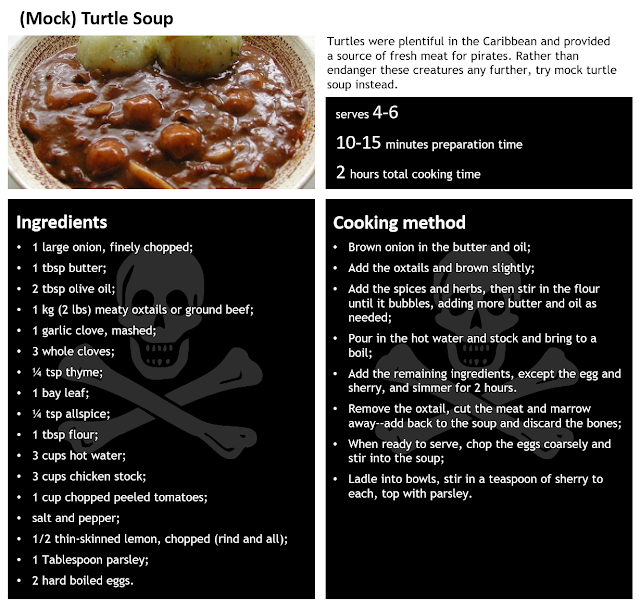 If the above seems a little too much, then comfort yourself with either "Eggs au Miroir" or a salad dish that originated in 17th century England - a favourite aboard ship or ashore - known as "salmagundi".  The latter is not, however, a single recipe but describes the grand presentation of a large plated salad comprising many disparate ingredients.  These can be arranged in layers or geometrical designs on a plate or mixed.  The ingredients are then drizzled with a dressing.  Salmagundi aims to produce wide range of flavours, colours and textures on a single plate: 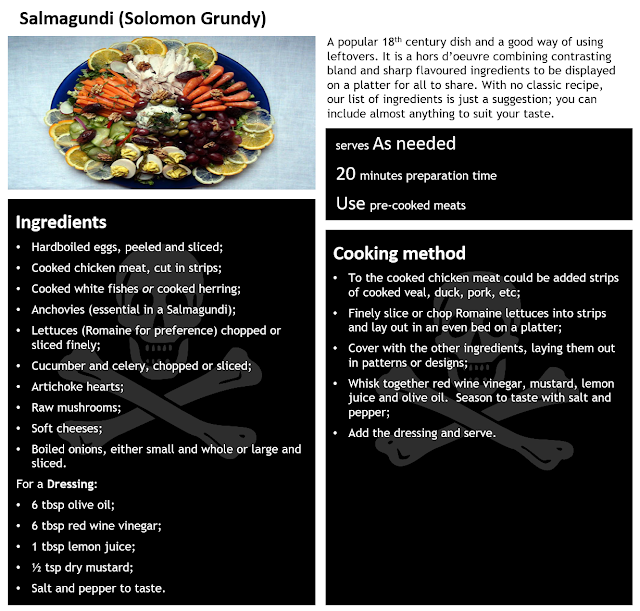 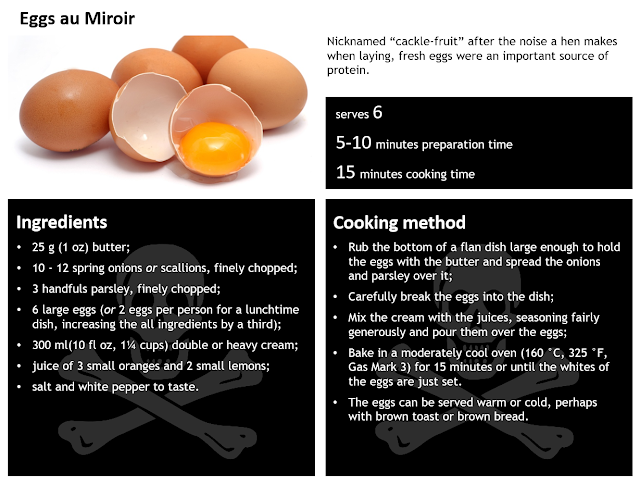 For desert, why not take a leaf from Hannah Glasse's "The Art of Cookery Made Plain and Easy" and finish with "Shrewsbury Cakes" and/or a Lemon Cheesecake: 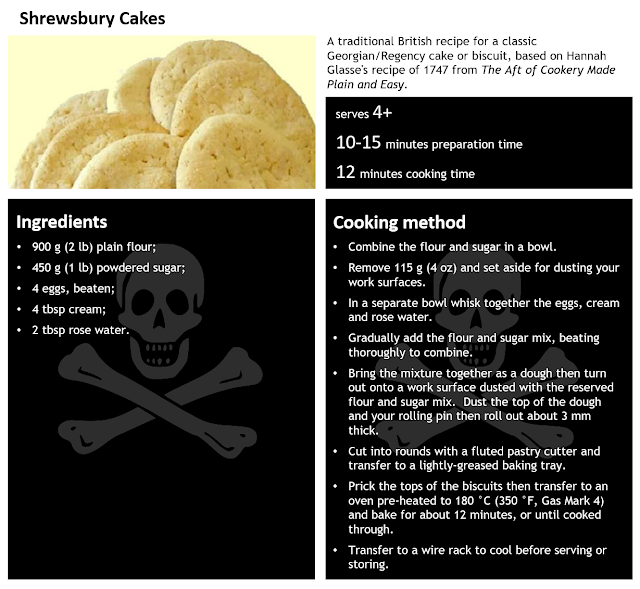 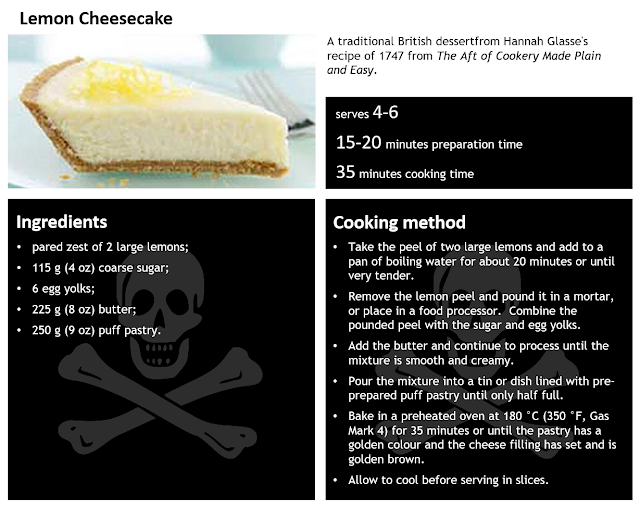 It is suggested that plentiful servings of cold beer, ale or rum punch should accompany the meal.  Drink up, m'hearties, Yo Ho!

More Georgian recipes will be published in due course, but if you would like more information on period cuisine, cooking methods and techniques, or life at sea, then please get in touch.
Posted by Tastes Of History at 15:34