Our repertoire has expanded once more.  For twelve days in October last year, and again for nine days in February this year, we stretched our culinary expertise further back in time to the Neolithic period of some 4,500 years ago.  In support of English Heritage’s “Feast Exhibition” at Stonehenge (which runs until September 2018), our aim was to recreate some of what the builders of this ancient monument cooked and ate.


Durrington Walls  The discoveries at Durrington Walls, an ancient settlement two miles from Stonehenge, tell a story of feasting and ceremony, each one a clue to explain what our ancestors ate, how they cooked, where their food came from and how it reflects their spiritual and cultural values.
Better evidence for the domestication of cattle, pigs and sheep has emerged from excavations at Durrington Walls where over 38,000 discarded animal bones - probably representing at least 1,000 animals - were recovered.  Analysis of these bones has revealed a great deal about where food came from, and how people in the Neolithic period prepared their meals. 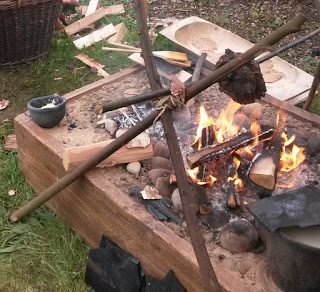 Of the bones and teeth excavated at Durrington Walls, 90% were from pigs, and the rest mostly from cattle. Many still had meat attached to them when they were discarded.  In its self this may not seem significant, but it does suggest that there was more than enough food to feed everyone.  Cut-marks, made by flint tools, on some of the cattle bones show the meat was clearly butchered, and burnt foot bones suggest that pigs were often roasted over open fires.

Roast Meat  For our part, we kept things simple by spit-roasting small joints of pork and beef.  This proved challenging outdoors in autumn and winter; cooking took far longer than expected.  Our experience was undoubtedly skewed by not being able to cook inside a roundhouse (for reasons of safety).  Given the time of the year, however, spit-roasting over a central hearth indoors probably would have been the norm.  Even so, taking all day to slowly spit-roast, or perhaps pit roast, a joint of meat makes some sense.
As dawn breaks, the embers of the fire are coaxed back to life.  After a simple breakfast, the men, women and children will set about their daily chores.  Those tending the hearth might be responsible for slow roasting the meat that will become the day’s main meal.  With people busy - hunting, gathering, caring for livestock, working in the fields, making or repairing things - frequent snacking, or grazing, may well have been the order of the day.  The idea of stopping for a defined midday meal appears a relatively recent creation.  By late afternoon or early evening, perhaps people returned home, gathering to enjoy the fruits of their labours and that slowly roasted meat.
Feasting  While we can to a certain extent generalise from the evidence at Durrington Walls, this was not regular, everyday consumption.  Instead, the evidence implies people were gathering and feasting at Durrington Walls, but why?  Many of the pigs had been killed at about nine months old which, since the piglets were most probably born in the spring, means they were being slaughtered in midwinter.  This suggests that people were gathering for feasts at that time of year to celebrate the seasonally important winter solstice.  But where did they all come from?
From stable isotope analysis, the relative amounts of different types of strontium, oxygen and sulphur in the animal bones and teeth can be measured.  In any creature’s formative years, including us, these elements are affected by geology, nearness to the coast, and climate.  This allows scientists to work out roughly where humans and animals were born and raised.
Analysis of the pig teeth from Durrington Walls suggests that some of the pigs were reared in west Wales, some in upland northern England and some even as far away as north-east Scotland.  The cattle teeth also suggest that these animals were not raised on the local chalk geology of rural Wiltshire.  All of which strongly suggests that the animals were most likely herded to the Stonehenge area.
Herding animals, even over relatively large distances, would have been much easier than slaughtering them first and transporting the carcasses.  Simple logic, yet it implies that people across Britain must have known about Stonehenge, where it was, and travelled there from afar, whether to help build the monument or to take part in ceremonies and feasts.  Moreover, it suggests there may have been far greater interconnectedness between Neolithic communities across the UK than one might have imagined.
Hunters, Gatherers and Farmers  By the late Neolithic period (3,000 to 2,300 BC), people in Britain had been farming for over 1,000 years, so they were expert at raising domestic animals for meat and milk, which seem to have been the most important elements of their diet and economy.  They also cultivated and processed cereals, although not on a large scale, and continued to gather wild foods such as mushrooms, berries and plants, and to hunt wild animals. 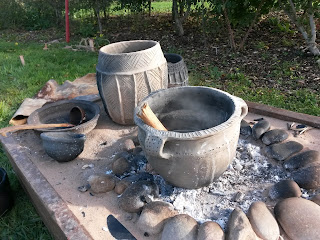 Apart from rare finds of preserved foods, our knowledge of what people 4,500 years ago were eating has been helped immensely by recent scientific developments.  When a pot is used for cooking, some of the food molecules seep into the porous ceramic material.  Scientists have recently developed new ways of chemically analysing pottery fragments to extract these trace residues and identify them.  At Durrington Walls, the pots were mostly found to contain pork and beef fats suggesting stews were popular.
Drink your Milk  About a quarter of the Durrington Walls Grooved Ware pots that were tested, however, were found to contain traces of dairy products such as milk, butter, yoghurt or cheese.  These products we duly recreated, with the soft cheese, together with a simple flat bread, proving to be particularly popular with Stonehenge’s visitors.  But wait.  We know that people in Britain at the time were lactose intolerant and did not having the ability to digest raw milk.  So why were pots found that had been obviously used to process milk into products like cheese and yoghurt?
Science Bit  Infant mammals nurse on their mothers to drink milk, which is rich in lactose.  In humans a gene known as LCT provides instructions for making the enzyme lactase (β-D-galactosidase), which is secreted in our intestines to digest lactose.  A specific DNA sequence in another gene (the MCM6 gene if you’re interested) helps control whether the LCT gene is turned on or off.  With the LCT gene “on”, the enzyme cleaves the lactose molecule into its two subunits, the simple sugars glucose and galactose, which can be absorbed by an infant to fuel growth.  Since lactose occurs mostly in milk, in most mammals, the production of lactase gradually decreases with maturity due to a lack of continued consumption after weaning.
This means that, having gained the developmental benefits of their mother’s milk, most mammals normally cease to produce lactase.  At least several thousand years ago, however, some humans developed a mutation in the MCM6 gene which keeps the LCT gene turned on even after breast feeding is stopped.  Such people are known as “lactase persistent” and can thus tolerate lactose in milk.  People who are lactose intolerant, or “lactase non-persistent”, do not have this mutation, and lacking lactase, consuming milk or other dairy products may cause adverse effects.
Confused?  To makes matters worse, genetically lactase non-persistent individuals can tolerate varying quantities of lactose before showing symptoms, and their symptoms differ in severity.  Most can digest a small quantity of milk, for example in tea or coffee, without suffering any reaction.
The simple answer to the Neolithic conundrum - lactose intolerance versus evidence for dairying - is that the processing of milk into products like butter, yoghurt and cheese significantly reduces the level of lactose.  For example:
·     The process of making butter largely removes lactose, albeit small quantities remain present; clarified butter contains a negligible amount of lactose. 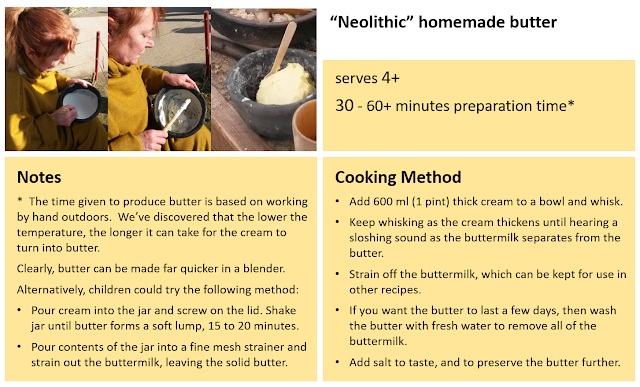 ·     Lactobacilli used in the production of yogurt remove lactose to varying degrees, depending on the type of yogurt.  Bacteria found in yogurt produce their own enzyme, lactase, which facilitates digestion in the intestines of lactose intolerant individuals.
·     Fermentation reduces the lactose content of cheeses, and aging reduces it further; traditionally made hard cheeses might contain 10% of the lactose found in an equivalent volume of milk. 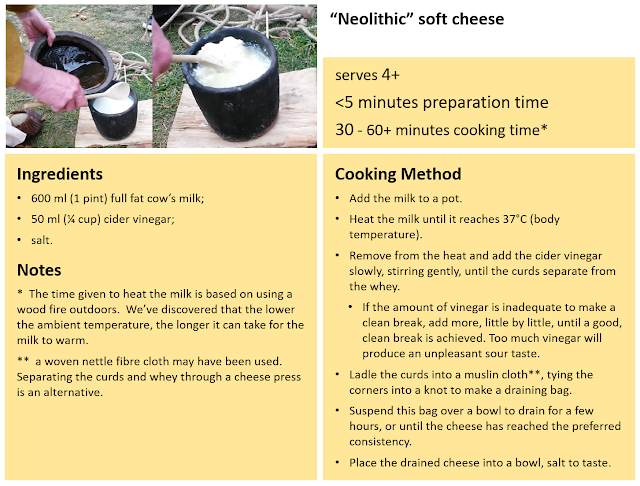 So, the evidence from Durrington Walls offers important proof that humans in Britain were developing that familiar tolerance to lactose.  As a consequence, we spent much of our time making butter and a simple soft cheese from cow’s milk, which was flavoured with mint.  Although lots of other plants can provide tasty flavours, it seems that mint is one of only two herbs native to Neolithic Britain, the other being thyme.  The latter we used in a flat bread recipe to compliment the cheese and allow Stonehenge’s visitors to sample (if they wanted) Neolithic-style “bread and cheese”. 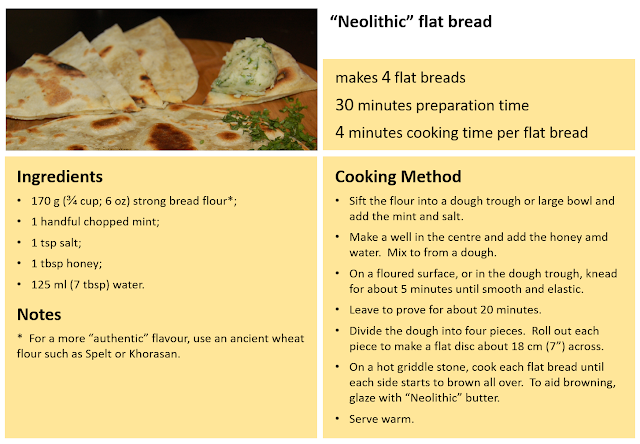 Supporting the Feast Exhibition proved to be an education for us as much as we hoped it was for visitors to Stonehenge.  The history of food provides an amazing continuity for the human story.  Our delight in discovering new foods or realising that we share so much in common crosses cultural barriers like nothing else.  Food and feasting, as embodied in the story of Stonehenge and Durrington Walls, simply brings people together.

Additional information:
Our storage and cooking pots were all hand-crafted by Graham Taylor of Potted History.
Flint tools were knapped by James Dilley of AncientCraft.

Our sincerest thanks go to all the staff at the Stonehenge Visitors Centre for making us feel so welcome.