Here at Tastes Of History we pride ourselves on trying to be as accurate as possible in what we do, especially when recreating history for the purposes of entertaining and educating the public.  Furthermore, we have both been Roman re-enactors for two decades with The Roman Military Research Society (THE RMRS) and consequently have accrued a wealth of knowledge on the ancient Romans.  Imagine then my horror when I saw this: 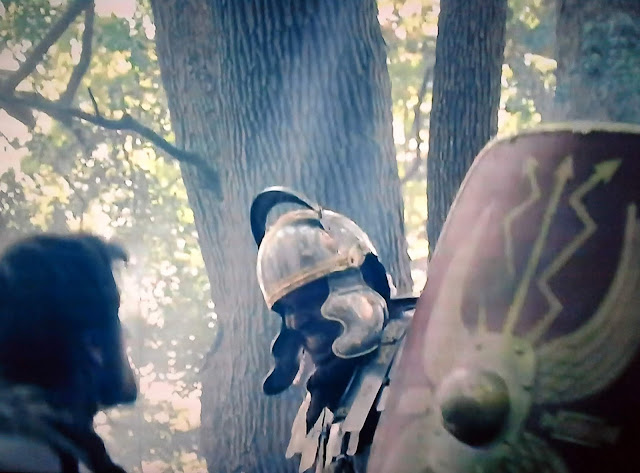 It is a still taken from an advert for a new History Channel television series called "Warrior's Way", which is scheduled to be broadcast in the UK later this month (May 2020).  For the uninitiated, you are probably wondering why this one image from a programme I have yet to view has got me so irritated.  There are several reasons that, if I am honest are actually minor criticisms, but taken together they point to much bigger problems with the public's perception of what is historically accurate and of television's credibility. 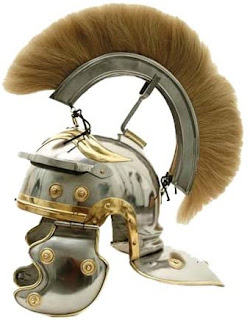 So, what is wrong with this picture?  Firstly, the helmet.  In Roman re-enacting circles it is known as "The Trooper Helmet", a poor quality, historically inaccurate lump of metalwork made in India.  These helmets were imported to the UK and sold through several agents some years ago.  Indeed, if you search on-line for "Roman helmet" today, it is most likely that a version of this helmet will appear.  Sadly the unwary might be tempted to part with good money on examples like the one pictured left, which is available on Amazon for a mere £45.98.  This version is being sold as a "Roman Centurion Helmet" which clearly it is not as the horsehair crest is fitted front-to-back and not transverse (ear-to-ear) as the evidence for most centurial helmets seems to show.

Crest fittings aside, if you want to be taken seriously and create a credible impression of a Roman soldier, then this helmet should be actively avoided.  Indeed, this is the advice THE RMRS imparts to all new members so they do not waste their money.  But you may be wondering why "The Trooper" is considered below par.  First let me explain the essential characteristics of Roman helmets introduced in the 1st century AD.  Each consists of a bowl and broad, ribbed neck-guard made in one piece, a browguard, and large hinged cheek-pieces.  They were often trimmed with brass piping and decorated with brass bosses[1].  Apart from the fittings being of poor quality, "The Trooper's" cheekpieces and neck-guard are domed unlike any exemplars from archaeology that I am aware[2].  Moreover the neck-guard tapers to a pronounced point.  Once again this deviates from the available evidence, and I do not know what the manufacturers were copying (or indeed thinking).  Yet it is the browguard that drew my particular attention in the above still, which leads to my second criticism.


The browguard on good reproduction helmets copy the known surviving examples and are fixed to reinforce the front of the helmet.  Just as the neck-guard quite clearly protects the back of the head and neck, the browguard was probably intended to counter (or at least hinder) downward slashing blows.  So why does the soldier in "Warrior's Way" have his helmet's browguard tilted toward the sky?  It reveals another issue with the historical accuracy and build quality of the "Trooper Helmet", namely that the browguard is not fixed in place.  Put simply, if the browguard can pivot as shown, then it will not function as the Roman design intended leaving the face vulnerable. 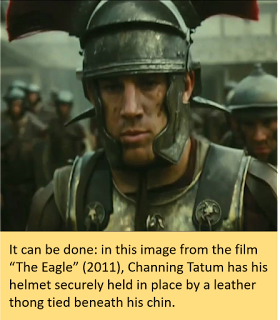 Thirdly, looking at the helmet's cheek-pieces, why, oh, why are they not tied together under the actor's chin?  If you think about it, the cheek-pieces are designed to protect the sides of the face, deflecting blows while not obscuring vision or hindering breathing.  Untied they simply flap about providing no protection whatsoever.  Yet, you will frequently see untied cheek-pieces sported by far too many "re-enactors" or extras in those recreated documentary scenes.  If it were not so annoyingly inaccurate, just imagine it is you in the fight sequence, or on one of the Roman army's famed route marches, and think how much fun it will be each time a loosely swinging cheek-piece smacks you in the face!  How far do you think you would go before securing the offending items?  Why, then, are those involved in producing recreated sequences, and those involved in the scenes, so adverse to simply and securely tying their helmet to their head?  Perhaps producers, directors, historical advisors et al. should be encouraged to start each day's filming slapping their cheeks until it jolly well hurts to prove the point.

The final "insult" comes in the form of the shield.  As a member of THE RMRS, we try to faithfully portray Roman soldiers of the Fourteenth Legion, Legio XIIII Gemina Martia Victrix.  One of the only known shield designs that we are reasonably certain can be attributed to a particular legion is that of the Fourteenth.  The evidence comes from the funeral stele of one Gnaeus Musius (pictured left), a Signifer (standard bearer) of Legio XIIII.  Gnaeus is shown with his hand resting on what we can assume to be his shield in the bottom right-hand corner of the relief.  Although not so clear in the image, examination of the actual carved shield reveals a distinctive design thus allowing us to make a reasoned connection.  Said design is reproduced on the shield carried by our "hero" in the "Warrior's Way" still perhaps suggesting an affiliation with the Fourteenth[3].  Given all the sloppy, unmilitary "issues" highlighted by this one image, one might be forgiven for thinking it insults the memory of the proud legionaries of Rome's Fourteenth Legion. That aside, the lack of historical accuracy does make one question the credibility of this history documentary even before it is broadcast.

Sadly, the "Warrior's Way" image epitomises for me all that is wrong with so many TV history documentaries, especially those that insist on recreating scenes[4] using the cheapest available (so-called) re-enactors.  In some way it insults the efforts of those who spend a lot of time, and money, on trying very hard to be as historically accurate as they can.  We do not always get it right - there are far too many historical unknowns - but the professional ethos of many re-enactors demands we strive to not mislead the public.  Given the power and influence on the popular imagination, it ought to be a similar matter of principle for television producers.  Getting costume, equipment and "the look" historically correct should not be too hard given the sheer volume of information available to even the most novice researcher.  It is not enough to think no one will notice, because we will.  So, television people, if you want to be taken seriously, not seek to exploit the viewer's credulity all the while producing quality history documentaries, then consider who can offer the best help.  It might cost a bit more, but the end result will be worth it.
Notes:

1.  Bishop, M.C. & Coulston, J.C.N, (2006), Roman Military Equipment, Chapter 5 "From Augustus to Hadrian", Oxbow Books, Oxford, p.101.
2.  If any readers know of examples, please let me know as I am always keen to revise my understanding.
3.  I suspect not as the design has become commonplace on reproduction Roman shields for sale.
4.  The dramatic fight sequence is another bug-bear.  "Roman soldiers" are usually depicted in some sort of free-for-all melee rather than fighting in the close-order disciplined ranks for which they were famous.  The latter, of course, would not be quite so dramatic.
Posted by Tastes Of History at 17:29