Dispelling Some Myths: "Ring a Ring a Roses" and the Great Plague

Ring-a-ring o' roses,
A pocket full of posies,
A-tishoo! A-tishoo!
We all fall down.

For those of us of a certain age, you might remember being told at school that the children’s rhyme "Ring a Ring a Roses" was all about the Great Plague that swept Britain in AD 1665 to 1666.  The lines supposedly describe the symptoms: the "roses" are the red blotches on the skin, the "posies" are the sweet-smelling flowers people carried to try to ward off the plague, "a-tishoo" mimics the sneezing fits of people with pneumonic plague[1][2], and finally "we all fall down" invoking the victims' demise.  For those who study folklore, however, this explanation is without basis - a myth. 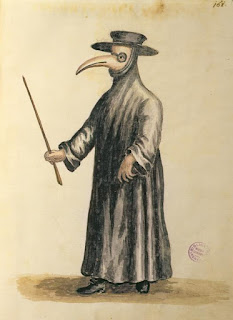 Yet the link with the Great Plague still holds sway over the popular imagination.  In 2014, for example, James FitzGerald asserted, in "Five London Nursery Rhymes Depicting Death And Ruin", that the rhyme refers to the Great Plague of 1665, an outbreak of pneumonic plague affecting London.  According to Stephen Winck[3], however, this interpretation emerged in the mid-twentieth century and, although it has become widespread, it has never been accepted by folklorists for several reasons.

Firstly there are many variations of the rhyme from across Europe and the USA.  In many of these versions the images associated with plague are simply not present.  Many have no words that sound like sneezes, and many versions do not mention falling down[3].  Indeed, several variations of the rhyme have people falling down only to get back up again, which makes little sense if they have died.  In European and 19th century versions of the rhyme the "fall" was not supposed to be a literal "falling down" but rather a curtsy or other form of bending movement common in other dramatic singing games or dances.

Moreover, of all the different versions known to exist, the rhyme did not appear in print until 1881.  It is not known what the earliest version of the rhyme was nor when it began, but it is said (albeit unsubstantiated) that a version was being sung to the current tune in the 1790s.  Yet it seems highly unlikely that, if the rhyme were about such dramatic events as the Great Plague, it would go undocumented for over two hundred years.  Even if it did, there ought to be other types of evidence.  A description of children playing dancing-games referring to roses and mocking the plague, for example, or oral traditions of the earliest informants making the link.  As it turns out, no evidence has turned up, despite meticulous day-to-day records of life in London in 1665 and the accounts of the Plague by those who survived it.  A sceptic would want to know "how the first person who claimed a connection between the events of 1665 and this rhyme find out about that connection, and why can’t we find whatever evidence he or she had?"[3] 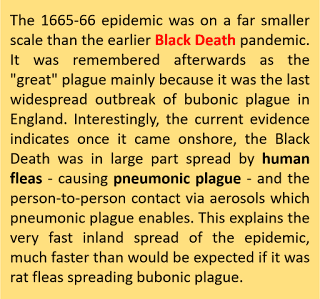 If that is not enough, then the symptoms described do not fit especially well with those of the Great Plague, the last major epidemic of the bubonic plague to occur in England.  Bubonic[4] is one of three types of plague caused by bacterium Yersinia pestis, the other two being septicemic plague and pneumonic plague.  One to seven days after exposure to the bacteria, flu-like symptoms develop including fever, headaches and vomiting.  In bubonic plague, swollen and painful lymph nodes occur in the area closest to where the bacteria entered the skin.  These swollen lymph nodes may occasionally break open.  If the rhyme reflects bubonic plague, then the first line might represent the red inflammation around the black buboes.

For those who argue that the Great Plague was the pneumonic version, then it is the third line "A-tishoo! A-tishoo!" that might be the closest analogy to the severe lung infection that develops.  With pneumonic plague, the first signs of illness are fever, headache, nausea and weakness.  This is followed by rapidly developing pneumonia with shortness of breath, chest pain, cough and sometimes bloody or watery sputum (the mucus coughed up from the lower airways).  The pneumonia progresses for two to four days and may cause respiratory failure and shock.  Patients will die without early treatment, some within 36 hours - "We all fall down".  Taken together it seems the rhyme does not point to one form plague or the other but to conflate the symptoms of both suggesting, as Winck writes: "that the story did not grow from compelling evidence; rather, evidence has been gathered to support a compelling story."[3]

As alluded to earlier, the link with the plague did not appear until the mid-twentieth century.  No mention is made before the Second World War, for example.  So, the great variety of forms makes it unlikely that the modern rhyme is the most ancient one.  Remember also that the words on which the interpretations are based are not found in many of the earliest records of the rhyme.  Put simply, that "Ring a Ring a Roses" is all about the Great Plague of London is yet another unsubstantiated myth.

1.  BBC Bitesize, A Summary of the Plague, retrieved April 21st, 2020.
2.  Observers noticed two strains of the plague.  Bubonic plague, with painful buboes, was spread to humans by infected fleas and transmitted from person to person.  In contrast, pneumonic plague was airborne and spread by sneezing.  Those who caught pneumonic plague often died within a day.