Dispelling Some Myths: The 300 Spartans

"The 300 Spartans" is a 1962 film retelling the story of the Battle of Thermopylae (Greek: Μάχη τῶν Θερμοπυλῶν, Máchē tōn Thermopylōn) that took place in August or September 480 BC.  For its time it is a pretty good dramatized account of the events surrounding the battle - unlike the graphic novel version "300".  Both films draw attention to the small number of Spartan hoplites who, against overwhelming odds, sacrificed their lives to defend Greece.  Despite the title, however, the earlier film shows how an alliance of ancient Greek city states (poleis, sing. polis), led by King Leonidas I of Sparta, fought the army of Xerxes I over the course of three days, during the second Persian invasion of Greece. 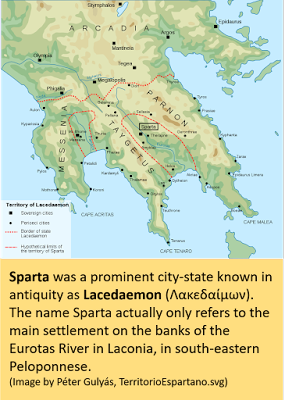 Background  The first Persian invasion of Greece was actually two distinct campaigns beginning in 492 BC.  The invasion was ordered by the Persian king Darius the Great primarily to punish the city-states of Athens and Eretria who had supported the cities of Ionia during their revolt against Persian rule.  Incurring the wrath of Darius, the Great King saw the opportunity to extend his empire into Europe, and to secure its western frontier.  Darius' venture ended in defeat with the decisive Athenian victory at the Battle of Marathon in 490 BC.
The Persian force returned to Asia and even though unsuccessful the expedition did fulfil most of its aims. Naxos and Eretria were punished and much of the Aegean, including all of Macedon, was brought under Persian rule.  Yet, Darius still had unfinished business.  He began to prepare a much larger invasion of Greece to firmly subjugate it and punish Athens and Sparta.  Internal strife within the empire delayed the campaign , and Darius died of old age before the expedition could be commenced.  It was thus left to his son Xerxes I to lead the second Persian invasion of Greece.
Ten years later Xerxes had amassed a massive army and navy, and set out to revenge his father's failure and conquer all of Greece.  Facing the threat, the Athenian politician and general Themistocles proposed that the allied Greeks halt the advance of the Persian army at the narrow coastal pass of Thermopylae ("The Hot Gates"), while simultaneously blocking the Persian navy at the Straits of Artemisium.  A Greek force of approximately 7,000 men duly marched north to block the pass in the middle of 480 BC.
Thermopylae  The Persian army[1] arrived at the pass in late August or early September but were held by the vastly outnumbered Greeks for seven days.  The actual fighting, however, only lasted three days.  For two full days the small force led by King Leonidas blocked the only road by which the massive Persian army could pass.  After the second day, a local resident named Ephialtes betrayed the Greeks by revealing a small path used by shepherds that allowed the Persians to outflank the Greeks.  Leonidas, aware of the danger, dismissed the bulk of the Greek army but remained to guard their retreat with 300 Spartans[2] and 700 Thespians[3].  This small rear-guard fought to the death in one of history's most famous last stands.

Perhaps it was the relatively small number of hoplites, and the death of a king, that has led to the 300 Spartans being immortalised above all others.  Indeed, over the centuries many writers, ancient and modern, have used the Battle of Thermopylae as a symbol of their selfless courage against overwhelming odds.  Yet the "300" were not alone. Thousands of Greeks put aside their differences and grievances to unite against a common foe; perhaps a lesson for us all in trying times.
Notes:
1.  In his "The Histories", the ancient Greek historian Herodotus claims Darius' army numbered 1,700,000 infantry and 80,000 cavalry.  This enormous army "drank the rivers and lakes dry".  It is highly unlikely that an ancient army of such colossal size could have been supplied in the field or lived off the land.  Today Darius' army is considered to have been much smaller, perhaps ranging between about 100,000 and 150,000 men.  Still a sizeable force, it is one more easily supported logistically.
2.  In August 480 BC, Leonidas marched out of Sparta with a small force of 1,200 men (900 helots and 300 Spartan hoplites).  Herodotus explains the full Spartan army delayed its advance until completing the traditional Karneia festival (held in honour of Apollo Karneios).  Leonidas' force was sent ahead to strengthen the Allies' resolve and to reassure the other Greeks that the full Spartan army was on its way.
3.  Others contingents also remained, including the 900 helots of the Spartan's and 400 Thebans; most of the Thebans later surrendered.
Posted by Tastes Of History at 09:00