Dispelling Some Myths: The Hidden Code in Statues

You might have heard how the statue of a horse and rider reveals how the named person died.  In the United Kingdom, and the United States, this popular urban myth is held to be: Writing for the Londonist, Matt Brown studied fifteen equestrian statues[1] of named individuals across London to see if this pattern held true[2].  Interestingly, nine of the fifteen horses have all four hooves on the ground which does correlate with the rider's eventual death.  For example, two statues of the Duke of Wellington, one in Hyde Park Corner and the other at the Royal Exchange, both depict his horse with all hooves grounded.  The Iron Duke died, aged 83, on September 14th, 1852 in Walmer Castle in Deal, Kent.  He was found sat in a chair, his death being recorded as due to the after-effects of a stroke culminating in a series of seizures.  He had sustained only minor injuries during his military career and had not been on a battlefield since Waterloo in 1815.  In the Iron Duke's case, as with the other seven quoted, the named individuals did not die in battle nor from wounds received.  So, the pattern seems to be holding, but what of other equestrian statues? 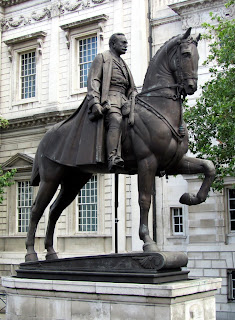 Just three further examples (undoubtedly there are many more across the UK and further afield) will suffice to reveal the inconsistency of the myth.  Take the statue of King George III.  Situated on Pall Mall his horse is sculpted with one hoof raised indicating, if the myth is true, that he had been wounded.  He never once fought a battle.

Similarly, another famous example in Whitehall, London, is of Earl Haig (top right).  The raised hoof suggests battle wounds, but Field Marshall Douglas Haig evaded any serious harm while commanding the British Expeditionary Force (BEF) on the Western Front in the First World War.  He died of a heart attack, aged 66, on January 29th, 1928. 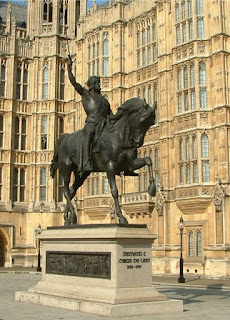 Finally, to confuse the picture, the memorial of Richard the Lionheart, which stands outside the Palace of Westminster, shows the king in full mail mounted passant[3], his sword held forcefully aloft (below right).  His horse's left foreleg is very obviously raised which, in this case, actually would be correct.  On March 26th, 1199, while besieging the puny, virtually unarmed castle of Châlus-Chabrol, King Richard was hit in the shoulder by a crossbow bolt.  The wound turned gangrenous and the Lionheart died of sepsis (blood poisoning) eleven days later.

If nothing else, these three examples reveal the truth: there is no tradition of indicating on a statue how an individual died.  While it would correct to point to statues of each type that do fit the pattern, these are really just coincidences or one-offs[4].  Even more frustratingly, there is no evidence for where and when this idea came from, yet people still believe this myth to be true.  Hopefully not now though..?