We keep hearing mention of pasta's ancient Roman roots, but as far as we can ascertain pasta in the form familiar to us today simply did not exist until the 13th century at the earliest.  Here at Tastes Of History we have attempted to work out why this popular misconception persists and perhaps how the confusion has come about.  So, to improve our understanding of the history of foods, we have tried to unravel the origins of pasta, or more accurately whether it was something known to ancient Greeks and Romans.

If you ask someone to name two Italian foods they (almost) invariably reply: "pizza and pasta".  These two dishes have become synonymous with Italian cuisine, so a link to the ancient Romans would appear to make perfect sense.  But there is a problem.  Despite some similarities, the Romans ate neither pizza or pasta.  That said, descriptions from ancient sources do reveal a popular food made from flour and water that, on the surface, resembles the ingredients for making pasta.  At the risk of being pedantic, however, that is where the similarities end.

Defining Pasta  Pasta is typically made from an unleavened dough of wheat flour mixed with water or eggs.  The resulting mixture can be formed into sheets or other shapes, then cooked by boiling or baking.  While pasta is a staple food of Italian cuisine, it has Greek origins.  The term "pasta", for example, is derived from the Latinisation of the Greek word παστά (pasta), meaning a "barley porridge", with the familiar term entering the English language in 1874[1].

Pasta-like foods have been eaten for centuries, particularly in the Mediterranean and the Middle East.  Many of them, however, are not necessarily recognisable as a modern pasta.  Today's pastas are divided into two broad categories: dried (pasta secca) and fresh (pasta fresca).  Although it can be produced at home, most dried pasta is factory-made using an extrusion process to mass produce a relatively cheap commercial product.  Like the early forms, however, fresh pasta is traditionally handmade, although today simple pasta making machines often aid the process[2].  Both the early forms and modern pastas use wheat flour mixed with water to make an unleavened dough.  Pasta makers today favour semolina flour, which is ground from the endosperm of Durum wheat, to produce a similar mixture.  It is this basic similarity between the ancient and modern recipes that has driven many commentators to link the two in an origin myth, with the term "pasta" being applied indiscriminately.

To complicate things, both dried and fresh pastas come in a bewildering number of shapes and varieties.  There are 310 specific forms known by over 1300 documented names[3].  In Italy, the names of specific pasta shapes or types often vary by locale, but would any of them be familiar to ancient Greek and Roman cooks?

When in Rome  In the 1st century AD, references are made to tracta (singular: tractum; ancient Greek: τρακτὸς, τρακτόν), thin sheets of drawn-out or rolled-out pastry dough that was typically fried[4].  According to Andrew Dalby, tracta "appears to be a kind of pastry.  It is hard to be sure, because its making is never described fully"[5].  Precisely what it was or how it was used seems to vary over time being an unleavened bread, a bread roll, or a sort of pancake.  Tracta is mentioned in Apicius' de re coquinaria as a thickener for liquids that Vehling translates as "a piece of pastry, a round bread or roll, in this case stale, best suited for this purpose"[6].  It is also mentioned in Cato the Elder's recipe for placenta cake, thin sheets of pastry dough layered with cheese[7], and Athenaeus's Deipnosophistae writes of a kind of cake called καπυρίδια, "known as τράκτα [tracta]", which uses a bread dough, but is baked differently[8]. 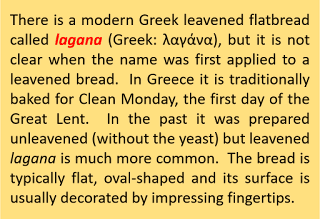 To confuse things even further, this everyday foodstuff, popular in both ancient Roman and Greek cuisines, was also called laganon, laganum, or lagana (Greek: λάγανον).   Writing in the 2nd century AD, Athenaeus of Naucratis provides a recipe for lagana which he attributes to the 1st century Chrysippus of Tyana.  In the recipe sheets of dough made of wheat flour mixed with the juice of crushed lettuce, are flavoured with spices and then deep-fried in oil[9].

An early 5th century AD cookbook describes a dish called lagana that consisted of layers of dough with meat stuffing.  This has given credence to the misleading claim that the ancient Romans ate lasagne.  There is no evidence to link the two dishes and it wold be misleading to do so even though, on the face of it, the two dishes do seem recognisably similar.  Some might claim lagana was the inspiration for the modern-day lasagne, but the ancient method of cooking the sheets of pastry dough (lagana) does not correspond to our modern definition of either a fresh or dry pasta product.  The confusion is easily understood when you consider that both have similar basic ingredients and perhaps a similar shape. 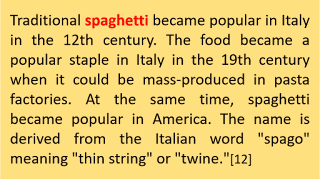 Italian Descent  The first concrete information concerning pasta products in Italy dates from the 13th or 14th century.  Most food historians theorise that the dish probably took hold in Italy as a result of extensive Mediterranean trading in the Middle Ages.  From the 13th century, references to pasta dishes - macaroni, ravioli, gnocchi, vermicelli - crop up with increasing frequency across the Italian peninsula[10].  Dried pasta became popular because of its nutritional value and its long shelf life[11].  Its storage properties became significant in the 14th and 15th centuries when dried pasta was an ideal foodstuff for long ship voyages and the subsequent exploration of the New World[11].  A century later, pasta went global as the European voyages of discovery explored far-flung destinations.  By then different shapes of pasta had appeared and new technology made pasta easier to make. With these innovations pasta truly became a part of Italian life[11].  The next big evolution in its history came about in the 19th century when pasta met tomatoes, but that is another story.

A Conclusion?  So where does all this leave us?  Fundamentally pastas prepared and eaten today are subtly but significantly different to those known in the ancient world.  What seems to have happened more recently is the liberal application of the term "pasta" to any dish, ancient or modern, made with flour and water (or egg).  The conflation is understandable as the use of similar ingredients to produce an unleavened dough does complicate any distinction, but labelling tracta or lagana as "pasta" is misleading.  Likewise, to connect lagana with lasagne is quite wrong.

The significant difference, if we are to be historically accurate, seems to be how these foods were cooked.  Ancient tracta or lagana was fried or used to thicken sauces, while modern pastas tend to be boiled or baked (served with a sauce).  Whether ancient or modern, however, this simple mixture of flour and water has provided a cheap, readily available everyday food for many centuries.  Long may it continue.