In the current issue of BBC History Magazine Dominic Sandbrook highlights a significant event in the month of April, namely the adoption of a national flag in 1606. Although King James I of England, and VI of Scotland, had united the crowns in his person, the two kingdoms remained resolutely separate. Three years into his reign, after reports of altercations between Scottish and English ships, to affect some form of harmony the King contemplated the question of whether ships of the two nations should fly the same flag. 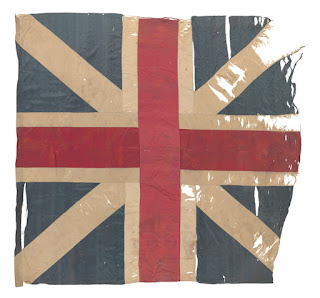 After months of discussion at court a design was agreed. So, on April 12th, 1606 the King issued a proclamation “declaring what Flags South and North Britons shall bear at Sea”. To avoid any further disputes, James ruled that “henceforth all our subjects of this Isle and Kingdom of Great Britain” shall fly “the Red Cross, commonly called St George’s Cross, and the White Cross, commonly called St Andrew’s Cross, joined together”.

Unfortunately, the exact design of this innovative flag is lost to us, but it is highly likely to have looked like the one used before 1801 (image left). In that year the cross of St Patrick was incorporated to arrive at the flag with which we are familiar. But what is it called? Should we refer to our nation’s flag as the “Union Flag” or the “Union Jack”? 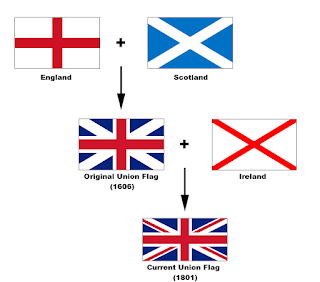 I confess that, in the past, I have been guilty of deriding those who call it the “Union Jack” as misguided. For many years I believed the popular name derived from the flag flown on the "jack staff" of ships of the Royal Navy. According to the official website of The Royal Family[1], this may be derived from a proclamation by Charles II that the Union Flag should be flown only by ships of the Royal Navy as a jack, a small flag at the bowsprit; the term “jack” once meant small. Another alternative is that the term “Union Jack” possibly dates from Queen Anne's time (r. 1702-14). Sadly, the etymology of either claim is uncertain, and the theory that the flag should only be referred to as "Union Jack" when flown at sea is, quite simply, wrong[2].

In the flag’s first few years of existence, nobody called it by either name. Today “Union Flag” appears to be the official title but, whether the term "Union Jack" does derive from the jack flag or not, after three centuries, it too is now sanctioned by use. The name has appeared in official use, has been confirmed as the national flag by Parliament and remains the popular term.

Notes:
1. The Royal Encyclopaedia, Union Jack, retrieved March 24th, 2020.
2. When interviewed about the “Union Jack” on a BBC Radio 4 programme (October 13th, 2013), Graham Bartram, Chief Vexillologist of the Flag Institute, stated that either name was perfectly valid whatever the purpose.
Posted by Tastes Of History at 09:00