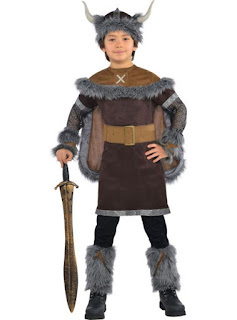 One of the history workshops that Tastes Of History offers for schools (in more normal times) is on the Vikings[1].  In doing so, we try to get our costume as accurate as possible, and it is great when the children also get dressed up.  Most, however, wear a form of fancy dress, typically bought on-line, an example of which is pictured left.  If the manufacturers are correct, then this seems to be what everyone expects a Viking warrior to look like, but there are a number of problems with this popular image.  Clearly the fabrics used in children's costume are of man-made fibres but, for some inexplicable reason, they are nearly always in browns or greys.  Admittedly, undyed wool or linen clothes would have been worn, but if you could afford it, then natural dyes could produce the diverse colours beloved by the fashionable of any period.

Taking a closer look at the example, I have no idea why the child model is holding what looks suspiciously like an ancient Greek xiphos, a sword with a distinctive leaf-shaped blade.  I'm equally bemused by the furry leggings which, I suppose, are trying to be leg bindings[2].  But why fur?  While it is not improbable, leg bindings of the period were typically long strips of woollen cloth (roughly 10cm wide) worn wound about the lower leg from the ankle to the knee.  Reminiscent of the puttees worn by soldiers in World War One (and later), such winingas provided support and protection for the lower leg.  Unlike the cloak shown which would offer little protection from the elements, but I digress.

The biggest complaint about such costumes, and the popular images of Viking warriors in general, are the horned helmets.  WHY!?  Practicalities aside for one moment, there is simply no evidence that Vikings wore horned helmets.  Nothing like them have ever been discovered in any archaeological dig.  Warriors who could afford them certainly wore helmets; the simplest would have been skullcaps designed to protect the head from an impact.  But sporting a pair of horns on your helmet in battle would not have been helpful if opponents were striking at you with clubs, swords or axes.  The horns themselves could act to funnel a blow straight onto the head - hardly a good idea.  Moreover, in close combat, the horns could used to grapple the opponent, pulling them off balance or snapping a neck - if the helmet was secured by a chinstrap.

So where does the modern idea of Vikings in horned helmets originate.  For that we can point to the 19th century and to the German composer Richard Wagner’s "The Ring Cycle"[3].  Opera is always a flamboyant affair and unsurprisingly costume designer Carl Emil Doepler (1824–1905) created horned helmets in the 1870s for the Viking characters.  Thus the myth was born.  Slavishly followed by numerous cartoonists, filmmakers and artists, this fantasy continues its hold on popular imagination right up to the present day.

So, if there were no horns, what helmets did the stylish warrior wear?  Any helmet has the single objective of deflecting or completely withstanding a blow from a weapon.  Only a few helmet examples dateable to the Viking era have been found intact.  These have been made in a variety of ways and from several materials, although typically the core material is iron.  The group of Valsgarde and Vendel period helms are the largest group of helmets to survive the last thousand years.  Others are the Sutton Hoo helm, the Benty Grange helmet, the Morken helm from Belgium, the Jorvik helm, and the Wenceslas helm from Czechoslovakia[4].  This is not a complete list, but it does give an idea of how rare a helmet find is and how diverse the finds are. 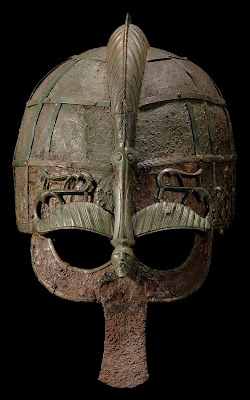 Metal helms of several types were all fairly similar in principle being made from bands of metal forming a framework typically in-filled by riveted metal panels.  Such helmets are often referred to by the Germanic term "Spangenhelm"[5].  Sometimes a nasal would be included to protect the face, often as an extension of the framework although it could be added separately.  Older spangenhelms often include cheek flaps made from metal or leather.  Spangenhelms may incorporate mail as neck protection, thus forming a partial aventail.   A few of the earlier Anglo-Saxon and Viking spangenhelms had spectacle like eye-protection, and are thus sometimes called "spectacle helmets".  Others include a full face mask.  Both the spectacle helmets and those with a full face mask seem to have become obsolete by the eighth century in Britain. 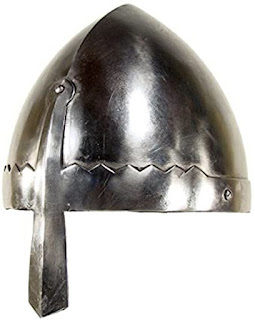 The spangenhelm provided effective protection while being relatively easy to produce.  The weakness of the design lay in its jointed construction and its partial head protection.  The spangenhelm was replaced by similarly shaped helmets made with a one-piece, conical skull.  These forms are typically known as nasal helms to distinguish them from the earlier spangenhelm.  So, for most warriors of the period, whether Angle, Saxon, Jute, Dane, Norwegian or indeed Norman, the good ol' nasal helm (pictured bottom left) was the helmet of choice - and no horns!

Notes:
1. The term "Viking" is popularly applied to all the Scandinavian peoples of the 8th to the 11th centuries, but it is a bit of a misnomer.  For more information take a look at What's in a Name: Vikings.
2. Alternatively known as: legwraps, winingas, wickelbander or puttees.
3. A cycle of four operas by Wagner based loosely on characters from the Norse sagas.
4. Levick, B. (1991), "Helmets", Regiapædia, recovered April 23rd, 2020.
5. "Spangen" refers to the metal strips that form the framework for the helmet and could be translated as braces, and -helm simply means helmet.
Posted by Tastes Of History at 09:00