Dispelling Some Myths: Thumbs Up

Most people in western culture recognise the "thumbs up" gesture as one that indicates all is well, while conversely "thumbs down" means the exact opposite.  These two thumb signals have become the established understanding of the two gestures throughout Europe, and much of the rest of the world. 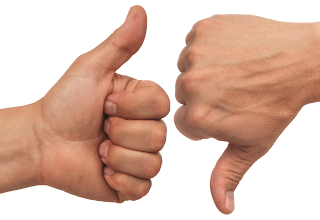 More importantly for the myth, there is no doubt in the popular mind as to the thumbs up's origin.  Reinforced by movies and the media, pretty much everyone accepts that the gestures hail from the days of gladiatorial combat in ancient Rome when a decision had to be made concerning the fate of a beaten fighter.  If the defeated gladiator had fought well, he could be spared by a thumbs up.  If he had fought badly, then with a thumbs down the crowd could demand his death. What could be simpler?

The problem is that the ancient Romans did not behave in this way.  There are, in reality, no ancient references to thumbs going either up or down in the amphitheatres.  It seems we acquired our modern thumbs up and down meanings from elsewhere, and have then re-written Roman history to fit[1].

Once again the whole story of the thumbs up “approval” sign is based on misunderstanding and mistranslation.  The Latin phrase used by contemporary ancient Roman authors was “pollice verso“ (or verso pollice) meaning "with a turned thumb”.  It does not mean a down-turned thumb but one that is moved in some unspecified way; no particular direction can be assumed.

The exact gesture described by the phrase and its meaning are the subject of much scholarly debate. From historical, archaeological and literary records it is uncertain whether the thumb was turned up, turned down, held horizontally, or concealed inside the hand to indicate a defeated gladiator's fate[2].


What that fate might be was decided not by the crowd but ultimately by the editor, the man hosting, and paying for, the spectacle.  A defeated gladiator would raise the right index finger, ad digitum, in the customary appeal for mercy to the editor[3].  The crowd, however, would have loudly voiced their desires with cries of "mitte!" (let him go!) or "iugula!" (kill him!).  With potentially thousands of voice all roaring together the editor might struggle to discern the most popular decision.  So, to attract the editor's attention, and influence the outcome, hand gestures are known to have been employed.

Our notions of these signals was popularised by the 1872 painting by Jean-Léon Gérôme titled "Pollice Verso" (usually translated into English as "Thumbs Down").  The large canvas (shown below) depicts Vestal Virgins signifying to a murmillo[4] their desire for the death of the fallen gladiator, a retarius or "net-man". 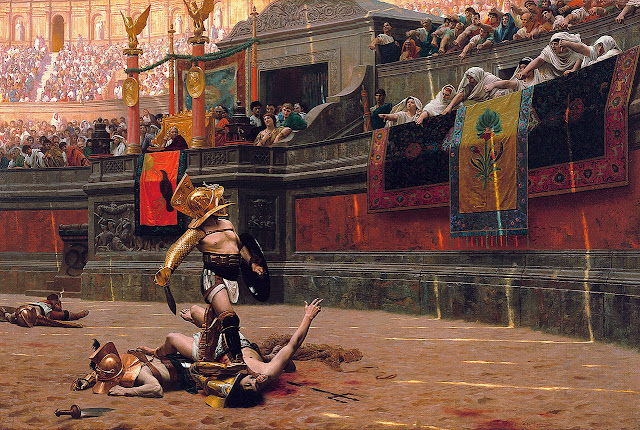 Gérôme's painting was instrumental in popularising the idea that thumbs up signalled life, and thumbs down signalled death.  The makers of Gladiator (2000) are on record stating the look and feel of the film were heavily influenced by Gérôme's iconic vision and, unsurprisingly, the thumbs up/thumbs down featured prominently.


Despite the uncertainty, the posture of the thumbs of those wishing to spare the gladiator was described as pollice compresso ("compressed thumbs").  In other words, not thumbs up, but thumbs covered up or folded away out of sight.  So it seems that the spectators would extend their thumbs for a kill or hide their thumbs for an acquittal.  The reason behind this is easily explained.  The defeated gladiator sentenced to die would accept his death as he had been trained to do, bravely offering his neck to the victor's blade.  From a kneeling position the deathblow would be delivered to the jugular efficiently dispatching the loser.

This then was the act mimicked by the crowd using their hands, their extended thumbs stabbing the air in encouragement. But what of the gladiator who, although beaten, was to be granted missio ("release"). If the spectators wanted to spare the defeated fighter because he proved himself valiant in battle, they did the opposite of sticking out their thumbs and hid them away. This made sense in an arena as vast as the Amphitheatrum Flavium (the Flavian Amphitheatre or more popularly, the Colosseum) where the kill/no-kill signals needed to he strongly contrasting to be visible at all.

4. The murmillo is named after the striped bream (Latin murmuros).
Posted by Tastes Of History at 09:00