Mention the word ‘swastika’ or worse draw the image and today you risk causing offence for so many reasons. Though once commonly used over much of the world without stigma, because of its iconic usage in Nazi Germany the symbol remains highly controversial in the Western world. Any discussion on symbology cannot, and must not (lest we condemn ourselves to make the same mistakes), divorce itself from these modern connotations. However, might it be appropriate to return this symbol to its more benign ancestry and through education over time deny its use to ‘extremists’. That’s the aim - now how to navigate the minefield..?


A ‘swastika’ is normally taken to refer to an equilateral cross with its arms bent at right angles, which appears either right-facing or in its mirrored left-facing form. The archaeological evidence for swastika-shaped ornaments dates to as early as the Neolithic period. As an ancient symbol, the swastika occurs mainly in the cultures that reside in modern day India and the surrounding area, sometimes as a geometrical motif (as in the Roman Republic and Empire) and sometimes as a religious symbol. It has long been widely used as a sacred emblem in world religions such as Hinduism, Buddhism, Jainism (see insert), and Mithraism. The major religions, with a total of more than a billion adherents worldwide, make the swastika universally found in both historical and contemporary society

Etymology  The word swastika is derived from the Sanskrit word svastik meaning any lucky or auspicious object, and in particular a mark made on persons and things to denote good luck.  It is composed of su-, meaning "good, well" and asti, a verbal abstract to the root as "to be".  Svasti thus means "well-being."  The suffix -ka intensifies the verbs meaning or confers the sense of 'beneficial', and svastika might thus be translated literally as "that which is associated with well-being", corresponding to "lucky charm" or "thing that is auspicious."[1]  The Hindu Sanskrit term has been in use in English since 1871, with alternative historical spellings including suastika, swastica and svastica. 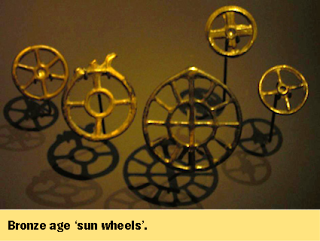 Origin Hypotheses  The ubiquity of the swastika symbol is easily explained by it being a very simple shape.  Many basket-weaving societies, for example, have independently arrived at a repeating swastika design using the edges of the reeds in a square basket-weave.  Regardless, the genesis of the swastika symbol is often treated in conjunction with cross symbols in general, such as the "sun wheel" of Bronze Age religion (see opposite).

History  As already alluded to, the earliest consistent use of swastika motifs in the archaeological record is dated to the Neolithic.  The symbol has been found on several pottery sherds from the Khuzestan province of Iran, for example, and as part of the "Vinca script" of Neolithic Europe of the 5th millennium BC.  In the Early Bronze Age, it appears on pottery found in Sintashta, Russia.  Swastika-like symbols also appear in Bronze and Iron Age designs of the northern Caucasus (Koban culture), and Azerbaijan, as well as of Scythians and Sarmatians.  In all these cultures, the swastika symbol does not appear to occupy any marked position or significance, but seems to be just one form of a series of similar symbols of varying complexity.

The swastika symbol also has an ancient history in Europe appearing on artefacts from many pre-Christian European cultures.  The Indo-Aryans, Persians, Hittites, Slavs, “Celts” and Greeks, among others, extensively used it as a decorative symbol.  In more modern times, the swastika experienced resurgence in the Western world following the archaeological work in the late 19th century of Heinrich Schliemann, who discovered the symbol in the site of ancient Troy.  Following his discovery, and after consulting two leading Sanskrit scholars of the day, Emile Burnouf and Max Müller, Schliemann concluded that the swastika was a specifically Indo-European symbol.  Later discoveries of the motif among the remains of the Hittites and of ancient Iran seemed to confirm this theory and thereafter associated the symbol with the ancient migrations of Proto-Indo-Europeans.  Schliemann also connected it with similar shapes found on ancient pots in Germany, and theorised that the swastika was a "significant religious symbol of our remote ancestors", linking Germanic, Greek and Indo-Iranian cultures.[1][2]

By the early 20th century, these discoveries, and the new popularity of the swastika symbol, had led to a widespread desire to ascribe symbolic significance to every example of the motif.  In many European countries, examples of identical shapes in ancient European artefacts and in folk art were interpreted as emblems of good-luck and success linked to the Indo-Iranian meaning.  Schliemann’s work, however, soon became intertwined with the völkisch[3] movements, for which the swastika was a symbol of "Aryan" identity - a concept that became equated by theorists such as Alfred Rosenberg with a Nordic master race originating in northern Europe.  Western use of the symbol, along with the attached religious and cultural meanings, was subverted after its adoption as the emblem of the Nationalsozialistische Deutsche Arbeiterpartei (Nazi Party).  With its conveniently-geometrical and eye-catching simplicity, the swastika was highly effective for associating Nazism with the Aryans as the historical forefathers of modern Germans and instilling racial pride.  It is worth remembering that many Roman symbols were also co-opted by the Nazis to blatantly associate the ‘Reich’ with ancient Rome and establish its imperial aspirations.  One need only look at the flags (vexillae), eagles (aquilae) and the bound bundle of wooden rods (fasces)[4] on display in parades (e.g. Nuremburg and Munich) and on all government buildings to see the obvious parallels.  Since then, of course, the swastika is almost exclusively associated in much of the West with Nazism, fascism, white

supremacy and racism, the Axis powers in World War II, and the Holocaust. 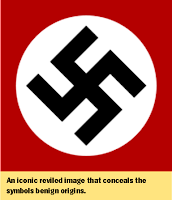 Today, the version of the swastika shown left remains a core symbol of Neo-Nazi groups.  How sad then that its original use as a ‘lucky charm’ has been so thoroughly corrupted.  Perhaps it is high time that we, as professional historians, teachers or history enthusiasts, begin the process of educating future generations to accept the swastika without prejudice and for what it has always represented.  Time, perhaps, to reclaim this most ancient symbol.  Good Luck!
Endnotes:
1.  Schliemann, H. (1875), Troy and its remains, Murray, London, pp. 102, 119-20.
2.  Boxer, S. (2000), "One of the world's great symbols strives for a comeback", The New York Times, July 29.
3.  The German interpretation of the populist movement, with a romantic focus on folklore and the "organic".
4.  During WW2, and ever since, the swastika became deeply stigmatized, yet strangely the fasces did not.