A Brief History of Foods: Turkey at Christmas

There was great excitement during Easter 2019 with the announcement of the first secure dating of a rabbit bone, found in Britain, to the first century AD.  While it has been widely believed that the Romans introduced the wild rabbit to these shores, actual scientific proof had been sadly lacking.  Analysis of a rabbit bone found in Fishbourne Roman Palace in West Sussex, however, now shows at least one animal was alive in Britain in the first century AD.  However, the origins of the rabbit in Britain, and its domestication, are not the focus of this post as the media quickly linked the timing of the find to the rabbit's association with Easter.  Reading around this latter subject led to the discovery of thought provoking research on "Celebrating Easter, Christmas and their associated alien fauna"[1].  Should you wish to read the full paper, it can be found here: https://doi.org/10.1080/00438243.2018.1515655, but what got my attention was all about Meleagris gallopavo, the Turkey, and its link to Thanksgiving and Christmas.  While not particularly partial to turkey myself, it was surprising how little I knew of the historical connection with the winter celebrations.  Being keen to share knowledge, especially when I've learnt something new, what follows are the pertinent paragraphs extracted and are presented for your information and delectation: 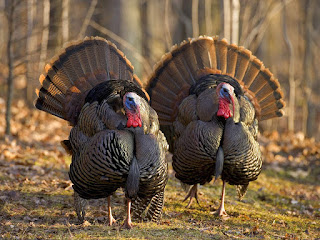 "The date of the turkey’s first appearance in Europe is unknown, but written documents suggest a 1511-12 introduction to Spain and 1520 in Italy (Crawford 1992; Fothergill 2014).  Their introduction to England is credited to William Strickland[2], who claimed to have bought six turkeys from Native American traders[3] and sold them in Bristol in 1524 or 1526.  Until recently, there were no archaeological finds to support a 1520s introduction, as the earliest closely dated physical remains were from a 1534-50 context at St Alban’s Abbey (Hertfordshire) and almost all other finds have broad date ranges (Poole 2010; Fothergill 2014).  Fothergill (2012) suggests that when turkeys were initially introduced to Europe their status as exotic animals meant they were more likely to be used for display purposes rather than food.

Initially, the turkey’s feast-day popularity in Europe may have been linked to their exotic status, but their growing association with Christmas and, in America, Thanksgiving, was likely facilitated by their natural breeding cycles.  The poults (chicks) are born in the early summer, reach adult size in the autumn and are ideal for slaughter in mid-winter (Fothergill 2012, 44; ‘’ National Wild Turkey Federation).


How turkeys became established as the ultimate Christmas fare is unclear, although Thomas Tusser’s book Five Hundred Pointes of Good Husbandrie indicates the association was in place by 1573. Tusser suggests that Christmas feasts should include ‘Beefe, mutton, and porke, shred pies of the best, pig, veale, goose and capon, and turkey well dressed’ (Tusser 1812, 57). It is interesting to note that this first reference to Christmas turkeys in England predates the use of turkeys in American Thanksgiving celebrations by over 150 years. The earliest specific references to turkeys at American Thanksgiving relates to the consumption of eight birds by the colony of Georgia in 1732, and in Savannah in 1733 (Smith 2006, 68). Both cases are associated with new arrivals from England, rather than existing American colonists, suggesting the possibility that including turkeys in celebratory meals was developed in England and only later exported back to the turkey’s continent of origin."

So, the turkey's central role in the American Thanksgiving began as an English tradition, another of which has it that Henry VIII was the first English king to enjoy turkey at Christmas.  Yet, while this tradition is said to have spread rapidly throughout England in the 17th century, goose remained the predominant Christmas roast until the Victorian era.  Turkey's more recent popularity as "traditional" fayre was undoubtedly helped by Charles Dickens' A Christmas Carol (1843), but it was King Edward VII who reputedly made eating turkey fashionable.

2. According to Richard Marriott, a descendent of William Strickland (https://www.bbc.co.uk/news/uk-england-humber-20672110), there is no real evidence that his ancestor did introduce the turkey to England.  Strickland, however, was keen to promote the story and thus adopted a turkey cock as the family crest.  The drawing of his coat-of-arms, held at the College of Arms in London, is thought to be the first depiction of the bird in Europe.
3. Native Americans hunted wild turkey for its meat as early as AD 1000.  Turkey feathers were used to stabilise arrows and adorn ceremonial dress, and the spurs on the legs of wild tom turkeys were used as projectiles on arrowheads.
Posted by Tastes Of History at 11:07