A Brief History of Foods: Salt

Salt is a chemical compound of sodium and chloride (NaCl) and is an essential nutrient, the amount of which in the diet has a direct influence on health. Today, it is almost universally accessible and relatively cheap. Most of us probably take salt for granted, but it was not always the case. It has been central part of human history for thousands of years largely due to salt's ability to preserve food. It was this property that effectively removed man’s dependence on the seasonal availability of food and increased the opportunities to travel long distances. 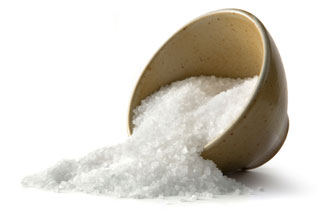 Some of the earliest evidence of salt processing dates to around 6,000 years ago, when people living in Romania were boiling spring water to extract the salts; a salt-works in China has been found which dates to approximately the same period. Salt was prized by the ancient Israelites, the Greeks, the Romans, the Byzantines, the Hittites and the Egyptians[1]. As such salt became a highly prized article of trade and was transported by boat across the Mediterranean Sea, along specially built salt roads - some of the earliest dating to the Bronze Age, and across the Sahara in camel caravans. The scarcity and universal need for salt has led nations to go to war over salt and use it to raise tax revenues. Salt is also used in religious ceremonies and its cultural significance has led some commentators to argue that it was a contributing factor in the development of civilisation.

In the early years of the Roman Republic, with the growth of the city of Rome, roads were built to make transportation of salt to the capital city easier. The most obvious example is the via Salaria , literally the “salt road”, that leads from Rome to the Adriatic Sea. The Adriatic, having a higher salinity due to its shallow depth, had more productive solar ponds compared with those of the Tyrrhenian Sea, much closer to Rome. It is commonly believed that, at certain times, Roman soldiers were paid with salt, hence the word “salary”, but this is unlikely. The Latin word salarium does seemingly link employment, salt and soldiers, but the precise link is far from clear. This misunderstanding probably stems from the Roman historian Pliny the Elder, who stated as an aside in his Natural History's discussion of sea water, that "[I]n Rome...the soldier's pay was originally salt and the word salary derives from it...".[2] Today it is more generally accepted that, although Roman soldiers were typically paid in coin, the word salarium is derived from the word sal (salt) because at some point a soldier's salary may have been an allowance for the purchase of salt[3] or the price of having soldiers conquer salt supplies and guard the salt roads, i.e. via Salaria, leading to Rome.

During the late Roman Empire and throughout the Middle Ages salt was a precious commodity carried along the salt roads into the heartland of the Germanic tribes. Caravans consisting of as many as forty thousand camels traversed four hundred miles of the Sahara bearing salt to inland markets in the Sahel, the semi-arid zone that stretches across the south-central latitudes of Northern Africa between the Atlantic Ocean and the Red Sea. Such markets traded salt for slaves: Timbuktu, for example, was a huge salt and slave market. Elsewhere, in China for example, salt was both a driver of technological development and a stable source of revenue for the imperial government.

There have been two main sources for salt: sea water and rock salt. Rock salt occurs when water in enclosed lakes, playas (or salt pans) and seas evaporates leaving behind vast beds of the mineral, some of which can be up to 350 metres thick. In the United States and Canada, for example, extensive underground salt beds extend from the Appalachian basin of western New York through parts of Ontario and under much of the Michigan basin. While in the United Kingdom underground beds are found in Cheshire and around Droitwich in Worcestershire.

On an industrial scale, salt is produced in one of two principal ways: the evaporation of salt water (brine) or by mining from underground beds. Evaporation can either be solar evaporation or using some heating device to produce salt crystals.
In the correct climate it is possible to use solar evaporation of sea water to produce salt. Brine is evaporated in a linked set of ponds until the solution is sufficiently concentrated by the final pond so that the salt crystallises on the pond's floor. This is the method recorded by the Roman authors where, in order to aid natural evaporation, shallow rectangular ponds (multifidi lacus) were dug, divided from one another by earthen walls. The opening and closing of sluices (cataracta) allowed sea-water into these pools through canals. The water was more and more strongly impregnated with salt as it flowed from one pond to another. According to Pliny the Elder, when reduced to brine (coacto umore) it was called by the Greeks ἅλμη, by Latin speakers salsugo or salsilago, and by the Spaniards muria. In this state it was used by the Egyptians to pickle fish[4], and likewise by the Romans to preserve olives, cheese, and meat[5]. As the brine left in the ponds crystallised, a salinator had the job of raking out the salt and laying it in heaps (tumuli) upon the ground to drain.

Throughout the Roman Empire salt-works were commonly public property, but were leased by the government to the highest bidder. The first salt-works are said to have been established by Ancus Marcius at Ostia.  The important point, however, is that energy is required to evaporate the water or mine the salt. In these cases, the costs of fuel and labour have an impact on the cost of the end product of salt. The cost meant that, in the classical Mediterranean world at least, there was greater reliance on the use of fish sauce, or garum, as a cheaper more accessible substitute for salt.


As for the solution mining of salt, the earliest examples of pans date back to prehistoric times where the pans made of a course ceramic known as briquetage. Later examples were small pans about one metre square (3 ft square) made from lead and using wood as a fuel. After the Middle Ages pans started to be made from iron, firstly in pans measuring about 2.1 m (7 ft) by 2.4 m (8 ft). Over time pans have gradually increased in size until they are typically 6.1 m (20 ft) wide by 9.1 m (30 ft) long. Regardless of their size, brine would be pumped into the pans and concentrated by the heat of the fire burning underneath. The change from lead to iron pans coincided with using coal instead of wood to heat the brine. As crystals of salt formed these would be raked out and more brine added.

In the second half of the 19th century, industrial mining and new drilling techniques made the discovery of more and deeper deposits possible, increasing mined salt's share of the market. Although mining salt was generally more expensive than extracting it from brine via solar evaporation of seawater, the introduction of this new source on an industrial scale had the overall effect of reducing the price of salt.

Today one of the largest salt mining operations in the world is at the Khewra Salt Mine in Pakistan. The mine has nineteen storeys, eleven of which are underground, and 400 km (250 miles) of passages. The salt is dug out by the room and pillar method, where about half the material is left in place to support the upper levels. Extraction of Himalayan salt is expected to last 350 years at the present rate of extraction of around 385,000 tons per annum.[6] In 2002, total world production (of sodium chloride in general, not just table salt) was estimated at 210 million tonnes[7].  Five years later global production had increased by 12% proving salt continued inestimable value to us all.
References