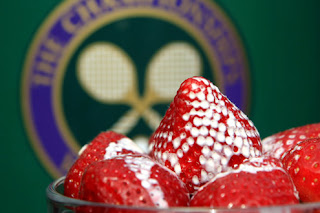 With the first week of the All England Lawn Tennis and Croquet Club's 2015 Championship in Wimbledon all but over, it got me thinking about strawberries (and cream) and where this iconic summer treat originated.  As usual, not all is as clear cut as you might think.  To give you a flavour of what I mean, back in 2010 Heather Driscoll-Woodford, writing for BBC Surrey[1], suggested Wimbledon's strawberries and cream had Tudor roots.  It is to Cardinal Thomas Wolsey, Lord Chancellor and King Henry VIII's right-hand man, that the credit is first given to combining berries with diary.

Although, as we shall see, strawberries had been around in England and elsewhere since the Ice Age, the idea of teaming them with a dollop of cream had not occurred to anyone.  Yet someone in Wolsey's Hampton Court Palace was apparently inspired to do so.  History, however, fails to name which of the many cooks it was, toiled for hours in the hellishly hot kitchens to produce the food needed to feed 600 people twice a day, who first created the dish.  So, rather unfairly, Cardinal Wolsey is given the credit for this simple combination enjoyed as a treat by millions worldwide.

Commonly known as strawberries for their edible fruits, the generic term for these flowering plants is actually Fragaria. Surprisingly, strawberries are part of the rose family, Rosaceae, and there are more than 20 described species, with many hybrids and cultivars[2]. Strawberries are not true berries[3]. The fleshy and edible part of the fruit is a receptacle, and the parts that are sometimes mistakenly called "seeds" are known as achenes[4]. Such achenes contain a single seed that nearly fills the edible outer layer of the fruit (known as the pericarp), but does not stick to it. The seed-like appearance comes from the hardening of the wall of the seed-vessel that encloses the solitary seed so closely as to seem like an outer coat.

The first garden strawberry was grown in Brittany during the late 18th century[5].  Before this, wild strawberries and cultivated selections from wild strawberry species were the common source of the fruit.  Indeed, man’s consumption of wild strawberries has been dated to the Neolithic based on the evidence from La Marmotta, a Neolithic site on the shores of a volcanic lake, Lago di Bracciano, 32 km (20 miles) northwest of Rome.  Similarly, we have evidence for strawberries being gathered from the wild before 6,000 BC at Grotto dell’Uzzo in Sicily.

Although a huge leap forward in historical terms, by the classical period Roman authors were mentioning strawberries for their medicinal uses.  And that’s where the story seems to stall until the 1300s when the French are credited with first bringing the wild strawberry from the forest to their gardens where they would be propagated asexually by cutting off the runners.   The French King Charles V (r. 1364 to 1380), for example, is said to have had 1200 strawberry plants in his royal garden.

In the early 1400s western European monks were using the wild strawberry in their illuminated manuscripts and, echoing the ancient Roman literature, the entire strawberry plant was being used medicinally to treat depressive illnesses.

By the 1500s references to the cultivation of the strawberry become more common.  People were still using it for its supposed medicinal properties, but now botanists began naming the different species.  In England the demand for regular strawberry farming had increased by the mid-1500s.  Written instructions for growing and harvesting strawberries appeared in 1578 and by the end of the century three European species had been cited; Fragaria vesca, Fragaria moschata, and Fragaria viridis.

The cultivation of the modern strawberry, however, had to wait until the 1600s when Fragaria virginiana was introduced from eastern seaboard of North America to Europe.  The new species gradually spread through the continent, but it was still essentially a wild strawberry very different from the modern hybrid.  It was a French expedition to Chile, in 1712, that led to introduction of a plant with female flowers, Fragaria chiloensis or the Chilean strawberry.  Once again, although these new plants grew vigorously in Europe, they still produced no fruit.  Until that is, in 1766, when it was discovered that female plants could only be pollinated by those plants that produced large fruit, such as Fragaria moschata, Fragaria virginiana, and Fragaria ananassa.  European growers finally understood that strawberry plants produced either male-only or female-only flowers, and it was this realisation that paved the way for the cultivation of the common strawberry hybrid that we have today.