Most people are familiar with the idea of eating breakfast, lunch and dinner (or breakfast, dinner and tea, if you prefer[1]).  In Tudor England, those of means and social status likewise ate three times a day, but this had not always been the case.

Breakfast  For centuries the daily routine of mediaeval monastic life had shaped when people ate.  Breakfast would have been eaten shortly after rising, but not before those who could had attended morning Mass.  With work to be done in the fields and livestock to look after, farmers and country folk would not have had the time for such services, but pious townsfolk, the gentry and their servants often did attend chapel daily.

It is thought the word “breakfast” entered the language in mediaeval England and meant "to break the night's fast".  Breakfast was a small, simple meal generally consisting of cold foods as the cook fires were just being lit as the household was rising.  Leftovers, eggs, butter, bread and small beer commonly formed breakfast.

Dinner  Church services aside, daily life was governed by daylight.  The entire Tudor day was structured differently with most people getting up much earlier and going to bed much earlier than today.  Ordinary working men and women most likely rose at dawn to maximise the available daylight.  By midday labourers would be hungry after toiling in the fields from daybreak.  They would take a short break to eat what was known as a “beever” or “noonshine” usually consisting of bread and cheese.  The farmer would either have his food brought to him as he worked in the field or he would have taken it with him in a bag.  A Tudor craftsman would close his shop and go upstairs to his lodgings, where his wife would have the meal waiting for him, his labourers and apprentices.

Since breakfast was eaten relatively early, those who did not rise early did not eat it.  Unless traveling or hunting, the nobility generally dispensed with breakfast in favour of a hearty mid-day meal.  Thus nobles, gentlemen and merchants would sit down for their main meal, commonly called dinner, around eleven or twelve o’clock.  For the Tudor nobility and gentry, dinner could be the beginning of a round of feasting that might last all day, or it could be a simple and unpretentious repast, depending upon the occasion and the temperament of the diner.

Dinner in a large household might consist of two, or possibly three, courses typically consisting of several different dishes.  Unlike today where all diners expect to get a portion of everything, not every dish would be within reach of every Tudor diner.  Instead guests were expected to select the things they liked best from the nearest "messe", a set of dishes usually containing several bite-sized portions to be shared between 2 to 4 people. 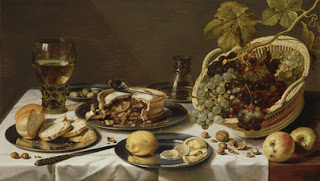 Slow cooked soups and pottages, usually made from beef, oatmeal and peas, were served first accompanied by bread.  Boiled and roasted meats and pies formed the second course.  After the meal, diners in the early Tudor period would have stood and drunk sweet wine and spices while the table was cleared, or "voided".  To avoid the noise and disturbance of clearing away, it became increasingly popular for the top table to withdraw to another room where special luxuries, or banquettes, could be enjoyed.  Today we think of banquets as a full meal, but when banqueting became fashionable in Elizabeth I's reign, the word applied only to a final course of fruit, cakes, biscuits and sticky preserves, all of which featured sugar in varying degrees.

Supper  The final meal, eaten at the end of the working day (between 5 and 8 pm), would be supper.  For the common man, this would often be the most elaborate of the day, though "elaborate" is an inappropriate adjective for the peasant's daily fare.  However, unlike dinner, which would often be eaten in the fields, the evening meal would be eaten at home at the common table.

You are what you eat  The fare eaten at Tudor meals would vary greatly depending upon the wealth and rank of the diners.  The gentry and wealthy townspeople dined upon the more expensive "brown meats" such as beef, venison, mutton and pork.  Although farmers raised the livestock that would become the beef, pork and other expensive meats, they were unlikely to keep much for personal consumption.  Put simply, more money could be made from selling meat to their wealthier patrons.

Consequently, common folk generally ate "white meats", which contained precious little meat and consisted primarily of such things as milk, cheese, butter, eggs, breads and pottages (soups).  This fare might occasionally be supplemented with locally caught fish, rabbits or birds.  The poaching larger game in the forest was still punishable by death, however.

Most meats were prepared by "seething" (boiling).  Since there was no refrigeration to keep food from going bad, meat and fish was generally eaten fairly soon after slaughtering or catching.  Game meats might be aged for a few days or weeks to tenderise them, however.  Smoking, salting or pickling were common practices to preserve food. 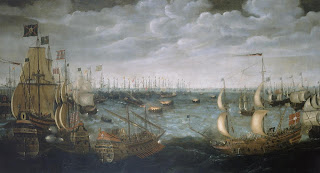 Fish days  All classes ate fish, not because it was exceptionally popular with Tudors but because nearly a third of the year was designated “fish days”.  The government mandated an increased number of fasting days to support for the fishing industry as Queen Elizabeth needed experienced sailors to man her navy.  In the words of the Act of 1563, fish days were “for the better maintenance and increase of the Navy…and not for any superstition…(nor) for the saving of the soul of man”.  When the English fleet of 226 ships faced the Spanish Armada in 1588, only 34 belonged to the Queen.  The rest were merchantmen manned by fishermen, Thames watermen and other civilian mariners.

During Lent or the weekly fasting days of Wednesday, Friday and Saturday the law required that fish be consumed, and other meats laid aside.  “Fish”, however, included veal, game and poultry or anything loosely connected with water, for example beaver.

Dining was one of the Tudor's principal amusements.  All social classes loved a feast.  For the common man and woman, feasting was reserved for holidays or weddings, while for the rich, every meal could be a feast.  Even when there was no special occasion, all social classes would put as much food on the table, in as many varieties, as they could afford.  For the rich man, this might mean numerous dishes, some elaborately decorated and intended entirely for show, served according to an elaborate ritual by household servants.  For the common huswif (housewife), this may have meant a daily challenge of trying to make the same old stuff seem new and different.  All but the very poor, however, would bring to the table more than they could eat.  This meant that the leftovers, or "broken meats", particularly in wealthier homes, would feed the household servants or being given as alms to the poor.