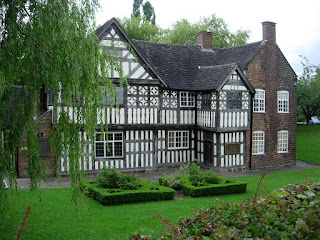 Sunday July 23rd found Tastes Of History at Ford Green Hall in Smallthorne, Stoke-on-Trent recreating dishes from Tudor and early Stuart England.  For those of you that don't know, Ford Greenbuilt in 1624 for Hugh Ford, a yeoman dairy farmer who owned 36 acres of local land.  Occupied by the Ford family for nearly 200 years, the Hall is a fine example of a timber-framed farm house, hence its Grade II listed building status.  In the 19th century, after the Ford family left, the prestige of the house declined and it was eventually divided into 3 and later 4 cottages.  Today the Hall is an award winning museum that offers visitors a fascinating insight into life in the 17th century.  The rooms are furnished with an outstanding collection of a number of original textiles, ceramics and pieces of furniture, as well as some reproductions.  There is an onsite café and the hall also holds a licence for weddings. 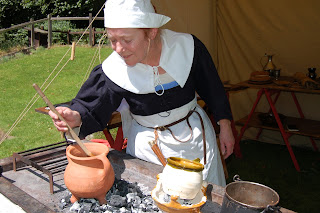 After several tiresome days of rain we were blessed with glorious sunshine in Staffordshire.  So, on a hot day what better way to celebrate than to don reproduction 17th century period woollen clothing, and light a charcoal fire!

Clearly the risk of setting fire to a timber-framed listed building was too great, so our kitchen tent was pitched in the grounds behind the Hall.  There Mistress Probert set to preparing a selection of dishes drawn from Tudor and Stuart period recipes.

On the menu for visitors to the Hall to sample were: 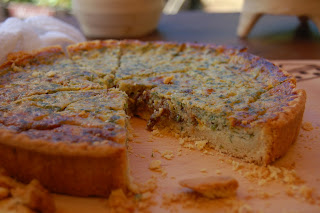 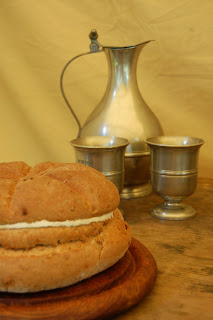 The many visitors who sampled our wares were certainly challenged by the unusual look of some dishes and, to modern palates at least, the flavour combinations of others.  Nearly all were surprised how tasty the recipes were and highly complimentary.  Clearly we had several hits on our hands, especially with those who had second or third helpings!

Next time will see Tastes Of History at Dover Castle over the weekend of July 29th and 30th.  There we will be producing medieval recipes in keeping with the more gruesome aspects of "Peasant Life".  So, if fancy baked Ox tongue, hog pudding, rabbit in blood, vinegar and onion broth or boiled head, why not come visit us on the castle's Palace Green?
Posted by Tastes Of History at 14:45