The sole mention of the arcuballista occurs in the work of Vegetius (Epitoma rei militaris)[1].  In book II.15, when describing how the ancient legion was drawn up in battle order, he refers to soldiers who shoot bolts with manuballistae and arcuballistae, terms which are typically translated as catapults and crossbows respectively.

In etymological terms, Latin ballista is taken from the Greek βαλλίστρα ‎(ballístra), itself derived from βάλλω (bállō, “I throw”).  So, manuballista (the Latin variant of the Gr. cheiroballistra) has the sense of “hand projector”.  Most scholars[2][3][4][5] seem to agree that this weapon was a torsion-powered bolt-shooter, but debate on its configuration is effectively divided into two camps: those who accept the translation literally and believe the manuballista was hand-held and, conversely, those who see it as a continuation and technological development of earlier stand-mounted catapults as seen, for example, on Trajan’s Column.

As for the arcuballista, its name suggests it incorporated an arcus (Lat. “arch”), but whether this refers to the bow of a non-torsion weapon or to the arched-strut (Lat. arcus ferreus) design of torsion weapons from the 2nd century AD onwards cannot be unequivocally stated.

However, in Book IV of Epitoma Rei Militaris (op. cit. IV.22), while discussing siege and naval warfare, Vegetius continues to make a clear distinction between the weapons “they used to call ‘scorpions’ what are now called manuballistae” and those such as fustibali (“staff-slings”), arcuballistae (crossbows) and slings.  Unfortunately Vegetius does not describe the latter any further assuming that his contemporary readers would be familiar with their form and function.  Weapons such as slings and staff-slings are clearly hand-held weapons however and, by implication, so must arcuballistae.  Moreover, by repeatedly referring to manuballistae and arcuballistae separately Vegetius, and other authors such as Arrian, is clear that the latter are different from torsion powered bolt-shooters and stone-throwers.  So, if arcuballistae are not torsion-powered, then it seems logical that they were very similar to medieval crossbows using flexion bows.

Thus we turn to the crossbows depicted on the Gallo-Roman reliefs (shown below) from Salignac (left) and Saint Marcel (right)[6].  These are obviously not gastraphetes (belly-bows) as they lack the distinctive crescent-shaped stomach rests characteristic of such weapons.  Nor is there any sign of winching mechanism for spanning the bows.  Are these then the elusive arcuballistae?

From a photograph of the Salignac relief in his article[7], Baatz suggests a plausible reconstruction of an arcuballista: 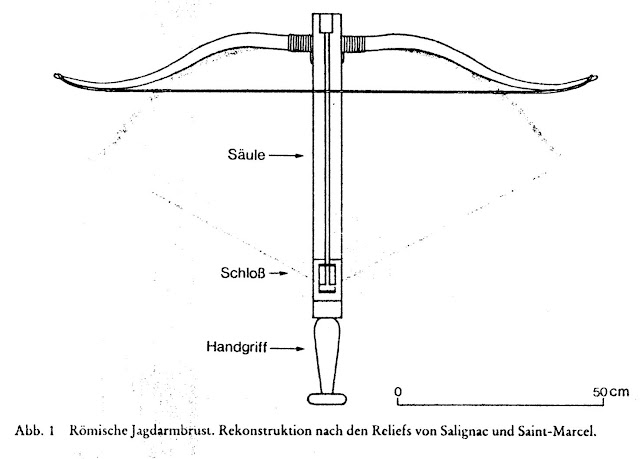 It is unclear whether the reliefs depict self-bows or composites; both were known and used by the Romans.  A reconstruction of a arcuballista could, quite reasonably, use either.  It is unlikely that a steel prod was used as in later medieval crossbows, however. 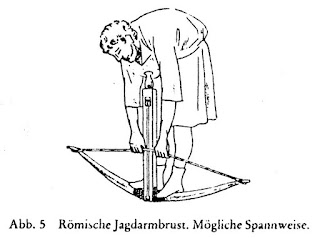 No known contemporary spanning devices have been discovered, and none are shown on the surviving French reliefs.  To span an arcuballista, a sketch in Baatz shows the arcuballistarius placing a foot on the belly of the bow, either side of the stock, and drawing the bowstring by hand.  So, the draw weight of the arcuballista cannot be so great that the bow cannot be spanned by hand.

A visual assessment of the Saint Marcel relief suggests the stock was between 60 cm and 70 cm in length using the forearm of the arcuballistarius as a cubit measure; the average cubit being 47 cm (»0.5 m).Likewise, using the same method of measurement, a bow length of c. 130 cm (tip to tip), as Baatz' suggests, is plausible.

Using the length of the depicted quiver on the relief from Saint Marcel, Baatz makes the assumption that missiles were of similar length to arrows shot from standard bows.  Furthermore, with the nut placed at the end of the stock, Baatz also assumes that the draw length was longer than that of later crossbows, and thus longer arrows could be used rather than shorter bolts. 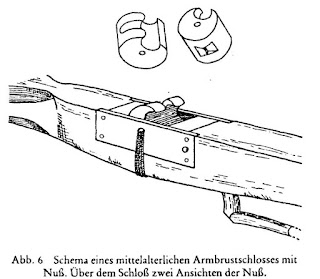 From the Saint Marcel relief there does appear to be a revolving nut.  Finds of something similar have been discovered in Britain and dated to the 5th or 6th century AD.  These, quite naturally, have been attributed to a form of late Roman crossbow.Releasing the nut may well have been effected with a trigger bar beneath the stock in similar fashion to medieval weapons.  Drawing back of the round handle at the rear of the stock might equally have been involved in releasing the nut.  Pushing the handle forward may have engaged a straight trigger bar in a notch integral to the revolving nut.  Precisely how the mechanism operated, however, remains a matter of conjecture.