The Latin term "craticula" is a diminutive form of "crates" used to mean a gridiron (Martial, 14.221)[1], the bars of which give it the appearance of wickerwork. The model reproduced below right, found at Pompeii, is of iron with a suspension ring (some have a handle) and parallel bars only, i.e. no crossbars; others have crossbars as well.  Early examples were found in Pompeii and now reside the Naples Museum.  The term "craticula" could equally refer to a griddle or grill, but should the term be applied to the combination of boiler and stove shown below left.  Also found in Pompeii, the roughness of the surface of this object has been caused by corrosion and volcanic ash adhering to its metal frame. For those interested the original can be seen in the National Museum Naples.

Applying the term “craticula” to this object somehow does not seem appropriate even though the rods that slide on the curved side-rails are reminiscent of a gridiron.  So, what should we call it and, perhaps more importantly, what was it used for? 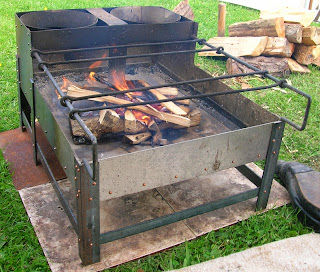 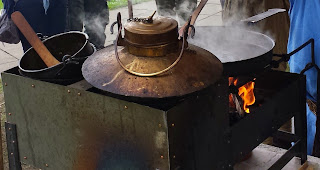 While we cannot be absolutely certain that it is indeed a cooker, it is certainly more than a simple gridiron.  Reproductions based on the original can provide useful insights as to how such an object from antiquity may have functioned. Tastes Of History’s bespoke version, shown opposite, is a case in point.

The design is actually rather ingenious.  The firebox is supported on braced metal legs.  Above the firebox are two curved side-rails to which horizontal sliding rods are fitted.  These rods can be adjusted along the length of the rails such that different pots and pans can be used.  Variously sized frying pans or cooking pots can be set on equally spaced rods, while separating two rods allows a pot to be lowered closer to the fire’s heat.  Indeed, the raising or lowering of pots in this manner moderates cooking temperature and time.

In the rear there are two openings to hold a caccabus, or stewpot, of which there are four different surviving illustrations.  Heat from the fire is drawn and funnelled beneath such pots to warm, simmer or boil the content.  A fire, or sometimes more than one, set in the firebox can be manipulated to control the available heat.  By placing the fire further back into the recess beneath the funnel(s) the cooking temperature can be raised.  Conversely, drawing a fire away from the openings quickly lowers the temperature. Simple.

With a lack of space, and in the absence of an alternative, for several years we used the cooker with it placed on the floor.  Apart from the back ache caused by tending to such a low-level fire, this position severely hampered airflow and required almost continual attention to keep the fire burning.  Yet it is believed that such cookers usually rested on top of a brick oven or range.  So, having constructed a plinth for this purpose, the effect on the fire’s draw was almost immediate.  Improved airflow led to a significantly better burn and the need to continually monitor the fire was much reduced.

Being a movable object suggests that this cooker may have been equally at home on a kitchen range or perhaps it could have been moved to and used in an outdoor triclinium (dining area).  Indeed it is thought that the original example was found in the garden of a Pompeian house.  As such it is tempting to speculate on how it might have been used.  Perhaps it was used to showcase and cook certain dishes before they were served to watching diners.  May be it was simply employed to warm drinks, or could it have been just an outdoor brazier - the Roman equivalent of a space heater.  The balance of probability, however, allied to the experience of several years, provides very strong evidence for such objects being innovative and versatile cookers.  Barbecue anyone?


[1] A Dictionary of Greek and Roman Antiquities (1890) William Smith, LLD, William Wayte, G. E. Marindin, Ed. The term is used as the base for the term graticule, passing through French.
Posted by Tastes Of History at 20:01