A Brief History of Foods: The Carrot

"A Brief History of Foods" is mostly aimed at improving my knowledge on the origins of the foodstuffs commonly eaten in Britain throughout its long history.  Over the years I have been surprised to learn how few of our commonly used ingredients are actually native to these shores, and just how many were introduced, when and by whom.  Perhaps you too might discover something new and quite interesting.  Our story begins with the humble carrot...

The wild carrot (Daucus carota) is a root vegetable now native in Europe and southwestern Asia.  It most likely originated in Persia, regions of which form the modern countries of Iran and Afghanistan.  The first mention of the carrot in classical sources occurs during the 1st century AD, where the Romans ate a root vegetable called pastinaca, which may have been either the carrot or the closely related parsnip.  The plant was introduced into Spain by the Moors during the 8th century AD, and by the 10th century AD, the carrot had spread to the rest of Europe and appeared in such locations as West Asia and India.  Cultivated carrots eventually appeared in China in the 14th century, and in Japan in the 18th century.

The domesticated form, Daucus carota sativus, was first cultivated for its leaves and seeds.  Some close relatives of the carrot, such as parsley, fennel, dill and cumin, are still grown purely for their leaves and seeds.  Although the carrot’s greens are sometimes consumed, today it is the greatly enlarged, more palatable taproot that is most commonly eaten.  Indeed, over the centuries the wild carrot was selectively bred to lessen its bitterness, increase its sweetness and reduce the woody texture of its taproot. 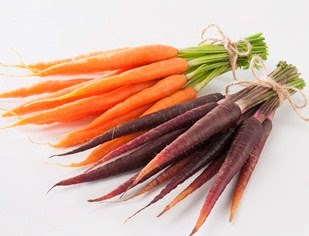 The taproots of the “original” carrots were purple, but black, red, white, yellow and orange cultivars exist.  Temple drawings from Egypt show a plant believed to be a purple carrot dating back to 2,000 BC.  By the 12th century the Arab agriculturist Ibn al-‘Awwam described both red and yellow carrots being cultivated in Andalusia, Spain.
It is often said that carrots were bred to be orange in the 17th century when patriotic Dutch growers favoured the colour used on their national flag.  This is just a popular belief, with little evidence to support it.  The orange colour in the domesticated cultivars results from the abundant carotenes that aid photosynthesis.
Although it is the familiar orange carrot that still dominates there is a small but developing trend to re-introduce its purple forebear to a more mainstream audience.  Outwardly purple carrots, still orange on the inside, were sold in British stores beginning in 2002, since when white and yellow varieties have joined them.
Posted by Tastes Of History at 15:11