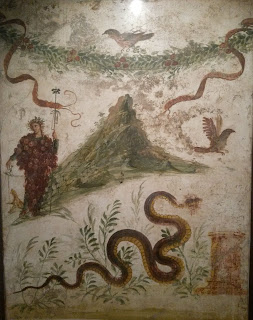 Located in sunny southern Italy, the ancient Roman city of Pompeii was perfectly positioned between lush vineyards and fertile plains to one side and the bountiful waters of the Bay of Naples to the other.  “Last Supper in Pompeii”, a major exhibition in the Ashmolean Museum in Oxford, tells the story of the city's love affair with food and wine.

When the ash from Mount Vesuvius began raining down on Pompeii in October AD 79, the townspeople were engaged in typical day to day activities: producing, buying and selling food and, most importantly, eating and drinking.  This remarkable exhibition provides an extraordinary insight into their everyday lives.

As is so typical of the UK media, the newspaper coverage of the exhibition’s opening made much of Romans eating dormice.  Given that Tastes Of History has spent two decades trying to correct this fallacy, we were keen to see the exhibition’s approach first-hand.

There are certainly surviving recipes for Edible, or Fat, Dormice (Glis Glis), so it can be argued that Romans did eat them - well, wealthy Romans might have done - as a culinary delicacy.  From the evidence available, however, dormice were not widely eaten by ordinary Romans, who simply could not afford such expensive luxuries.  Moreover, while there is a native species of small dormouse in Britain, the edible one was certainly not and the evidence for the latter’s introduction to these shores by the Romans is sadly lacking.  As for Romano-Britons eating them, there is even less proof! 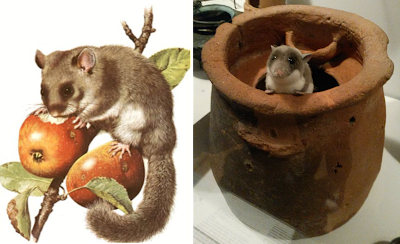 Edible Dormice are actually more like squirrels, being silver grey in colour, with white or yellow undersides. They have large round ears, black areas around small eyes and long bushy tails.  Typical examples are between 14 to 19 cm long, with a tail a further 11 to 13 cm long.  They were farmed and eaten (possibly as a snack), even though they were expensive to breed and raise. The latter was usually achieved in large pits or, in less spacious urban surroundings, in terracotta containers known as gliraria, something akin to hamster cages. The “Last Supper in Pompeii” exhibition has a wonderful example on show, compete with (ahem) a “dormouse”. Peppered with breathing holes, an edible dormouse would have been confined in such jars to simply eat, drink and sleep. With little exercise the dormouse would be fattened over a number of weeks until it was of sufficient size for the pot.

Being cooks we were very interested in the food preparation and kitchenalia elements of the exhibition. We were fascinated to discover that a rather unusual looking pan, a reproduction of which we possess, is described as cake baking tray. Suitably inspired, we shall experiment with our version and see how well it (albeit a reproduction) performs.
There was only one niggle. In the caption describing a series of serving platters, it is suggested that the visible cut marks might have been caused when someone cut a pizza too forcefully. Yet, pizza, as we understand it, was unknown in the Roman world. The biggest single problem is that most pizza dough bases are covered with a tomato-based sauce and tomatoes were not introduced to Europe until the late 15th or early 16th centuries. The species originated in the South American Andes and its use as a food began in Mexico, spreading throughout the world following the Spanish colonisation of the Americas. Moreover, the term pizza was first recorded in the 10th century in a Latin manuscript from the Southern Italian town of Gaeta in Lazio, on the border with Campania, while modern pizza was invented in Naples. It is, therefore, highly unlikely that any resident of Pompeii was eating pizza in the 1st century AD.

Notwithstanding this one tiny error, the “Last Supper in Pompeii” is packed with over 400 rare objects, including fine masterpieces of Roman art, ranging from the luxury furnishings of Roman dining rooms to the carbonised food that was on the table when the volcano erupted. The displays are supported with detailed, easy to read and digest, information panels, and an accompanying audio guide is available for both domestic and overseas visitors. We spent a good hour discovering the many wonderful objects on display.

While exploring this exhibition cannot replace a trip to Pompeii itself, it is a superbly informative alternative. “Last Supper in Pompeii” is running now until January 12th, 2020. Tickets can be purchased on arrival, but a timed ticket system is in operation. It is highly recommended, therefore, to book ahead to ensure you get the time slot of your choice. Full price adult tickets are £12.25 each although concessions are available. To book your tickets, click on this link or visit the Ashmolean Museum website.