Yet another TV drama refers to Britain's Secret Service, but why?  Britain has not had a "secret service" since the end of the Second World War.  At the time of writing that's 73 years ago!  So, why do journalists, media types, film and TV producers continue to confuse the title with the US agency of the same name.  Perhaps they are simply ignorant, or perhaps they are pandering to a US marketplace, or perhaps they think we Britons are too dim-witted to understand who's who.  Can it be that difficult to separate fact from fiction?  As it turns out, no.  A little open source research quickly finds the publicly available history of these two organisations in their own words. 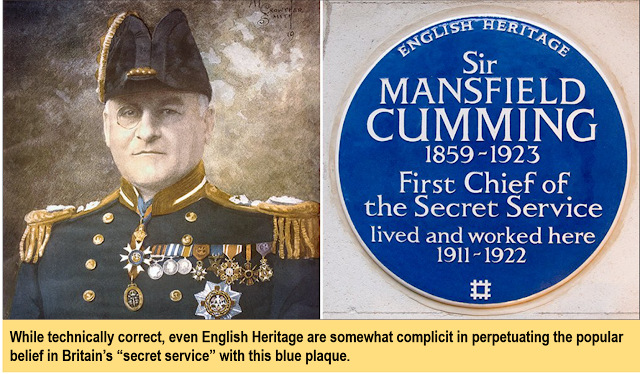 Since their establishment in 1909 both the Security Service and Secret Intelligence Service have had a variety of names, most famously MI5 and MI6, which has often led to confusion about what the Services have been called.  Officially the terms MI5 and MI6 were consigned to history decades ago but their grip on popular culture has been perpetuated by their use by the media and, in the case of MI5, the Security Service itself.

In the early 1900s, the British government was increasingly concerned about the threat to its Empire posed by Germany’s imperial ambitions.  This led to scare stories of German spies and even the Director of Military Operations was convinced that Germany was targeting Britain.  While the rumours proved to be exaggerated, the Prime Minister, Herbert Asquith, reacted to popular concern and ordered the Committee of Imperial Defence to look into the matter.  The Committee established a Secret Service Bureau in July 1909.  It was placed under the nominal supervision of the Directorate of Military Operations (DMO) of the War Office, the predecessor of today's Ministry of Defence.  The branch of the DMO responsible for the Secret Service Bureau was called MO5.

The Secret Service Bureau was absorbed into the War Office in April 1914 for the duration of the First World War.  Kell’s Home Section became part of section 5 of the Directorate of Military Operations assuming the title MO5(g).  Two and a half years later, in September 1916, MO5(g) was moved to the newly established Directorate of Military Intelligence within the War Office.  It became the fifth branch of the War Office’s Directorate for Military Intelligence, hence the name MI5.  At the start of the First World War MI5 played a central role in the capture of most of Imperial Germany's intelligence agents in the UK.

SIS’s sister organisation was renamed as the Defence Security Service in 1929.  Two years later this became the Security Service, the name by which it is still known today.  "MI5" continues to be widely used as a short alternative to the Service’s official name, while the use of “MI6” appears at the start of the Second World War when this abbreviation was adopted as a flag of convenience for the SIS.  It was used extensively throughout the war, especially if an organisational link needed to be made with MI5.  Indeed, by the end of the Second World War, 17 such “MI” branches had been created to perform a variety of functions, but of these only MI5 and SIS (MI6) still exist today.  Officially, however, “MI6” fell into disuse years ago, but many writers and journalists continue to use it to describe the SIS.

Strictly speaking, at no time have either organisation been known as “The Secret Service” despite this term being frequently and erroneously used in TV dramas and films.  The “Secret Service” is very definitely American. Officially called The United States Secret Service (USSS), or more commonly the Secret Service, it is a federal law enforcement agency controlled by the US Department of Homeland Security.  The Secret Service is charged with conducting criminal investigations and protecting the nation's leaders.  Until 2003, it was part of the US Department of the Treasury, as the agency was originally founded to combat the rampant counterfeiting of US currency after the American Civil War.  Over time the agency evolved into the United States' first domestic intelligence and counterintelligence agency.  Many of the it's missions were later taken over by subsequent agencies such as the Federal Bureau of Investigation (FBI), Central Intelligence Agency (CIA), Drug Enforcement Administration (DEA), Bureau of Alcohol, Tobacco, Firearms and Explosives (ATF), and IRS Criminal Investigation Division (IRS-CI).

Today the USSS’ investigative mission continues to safeguard the payment and financial systems of the United States from a wide range of financial and electronic-based crimes.  The agency also has a protective mission to ensure the safety of the President of the United States, the Vice President of the United States, the President’s and Vice President’s immediate families, former presidents, their spouses, and their minor children under the age of 16, major presidential and vice- presidential candidates and their spouses, and foreign heads of state.  The USSS also provides physical security for the White House Complex, the neighbouring Treasury Department building, the Vice President’s residence, and all foreign diplomatic missions in Washington, DC.
Posted by Tastes Of History at 18:07